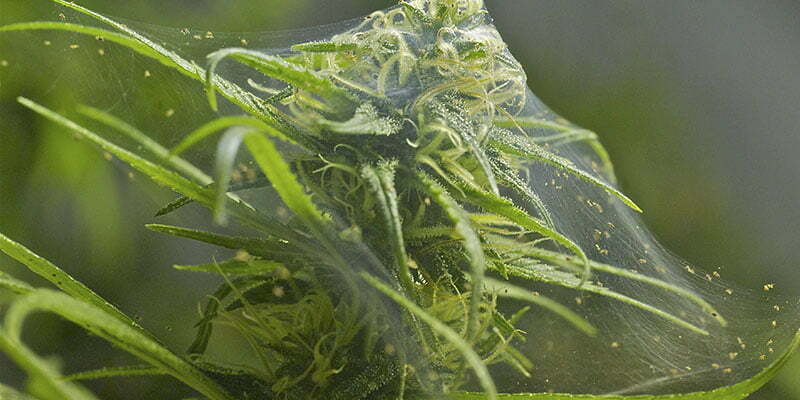 Cinnamon, as a ‘hot’ spice deters many fungal diseases and insects alike. Powdery mildew, ants, aphids, fungus gnats, spider mites, thrips and whiteflies are among the critters that don’t like cinnamon. When used as an oil spray, the spice will adhere to leaves giving it time to work against many ailments.

As a control at ground level, sprinkle ground cinnamon around the cannabis plants or combine with diatomaceous earth in equal parts. This will be effective against ants.

To control disease or insects that are attacking your plants, employ a spray. Sprays can be availed commercially, or make your own from ingredients you probably have in the pantry:

Clove oil is a natural repellent due to its scent and the resultant effect on certain pests coming in contact. Pythium, gray mold, Fusarium, ants, caterpillars, thrips, aphids and spider mites are repulsed by the scent of cloves. Although cloves flavor pumpkin pie and can be added to ham, it kills certain pests on contact. Hmmm, odd isn’t it? Nevertheless, it is an effective treatment. It becomes even more potent when combined with peppermint extract or citrus oil. Add a couple drops to water, as explained in the preceding cinnamon oil recipes, and spray. As always, do not spray during the heat of the day; early morning or early evening application will reap the optimum benefit.

Essential oils are the green means of dealing with pests in the cannabis garden. Essential oils can also be utilized in the home as an organic pest control and even as cleansers enabling you to discard harsh and harmful chemicals from your life.

Garlic has beneficial uses in our bodies and in the garden. Perhaps garlic is legendary to fighting vampires due to its repellent nature. Garlic, when ingestion by human beings guards against many maladies and aids in building a strong immune system. The same applies to plant life. Garlic has anti-fungal and anti-bacterial properties.

Use the basic recipe for making oil sprays, as mentioned in the oils section, and apply to new growth in order to ward off the emergence of attack. Be wary in the use of garlic spray as it can kill beneficial insects as well as those you need to eradicate. Garlic also offers an organic option for keeping deer from entering Mary Jane’s domain.

Grapefruit seed, sold as a concentrate in disinfectants, can control algae in the hydroponic marijuana grow room. Follow label directions.

Most oil controls under this spectrum consist of mineral oils. Horticultural oils are meant to be applied prior to the opening of buds as a means of controlling aphids, fungus gnats, leaf miners, mealy bugs, scale, spider mites, thrips and whiteflies. Some oils such as jojoba, sesame and cottonseed oil also contain fungicidal properties, effective against powdery mildew.

Oil sprays fall into two categories: winter oil (applied during the dormant season) and summer oil (applied during the growing season). Summer oils should be used on marijuana plants. Do not spray during daylight hours, as you can damage your plants. No matter what you spray on your cannabis, do so in the early morning or early evening in order for it to do its job. Apply the spray directly to the pests, as the oil will dissipate on the outer areas. This is actually good news, making horticultural oils safe for humans and animals. However, always check the labels and follow directions.

Limonene is made by extracting the oils from citrus rinds. It can be applied as a foliar spray, soil soak and is even used as a household cleaner. When used in the garden, limonene dehydrates and asphyxiates ants, aphids, fungus gnats, mealy bugs, scale, spider mites and white flies. It will also control powdery mildew.

Mix two ounces limonene per one gallon water. Spray on leaves to kill plant dwellers or pour onto the soil for critters which do their damage at ground level. As always, apply early morning or after the sun goes down. Limonene is available commercially under several brand names.

Neem oil is extracted from the nut of the neem tree, native to India. The insecticidal component of neem oil is azadirachtin which when applied, stops insects from feeding and developing. Neem oil is an effective defense against ants, aphids, fungus gnats, leaf miners, mealy bugs, scale, thrips, white flies and root weevils. Other components in neem oil have fungicidal properties combating gray mold, root rot, Septoria and powdery mildew.

The beauty of using neem oil in the cannabis garden is its low toxicity factor for humans, animals and the beneficial bugs you want to keep around. Neem oil is so safe for humans it is an ingredient in many household items such as toothpaste, shampoo and cosmetics. It is considered an organic control, will not harm the environment and can be found at local lawn and garden centers.

Neem oil can be applied as a foliar spray, soil drench and is safe to use in hydroponic systems. In the latter, apply one teaspoon per quart of water. The oil will be taken up by the root system and distributed throughout, protecting the plant from attack.

As a foliar spray, test an inconspicuous area of the marijuana plant before applying to the entire plant. Wait twenty four hours to see if it is well tolerated. Once confirmed, spray the leaves lightly. This should be done weekly until there is no longer evidence of pests or disease. Do not apply in extreme temperatures or during the day. Apply at night to allow the leaves to absorb the oil.

To make a sesame oil spray at home, add one teaspoon sesame oil (available at health food stores) to one pint water and a couple drops pure castile soap. Spray on plants either before sunrise or after sundown.

These are necessary to oil applications, allowing adhesion of the spray. Without adding a wetting agent the oils will simply slide off the leaves before they can have a positive effect in controlling fungus or pests. The most recommended wetting agent is pure castile soap. Do not use liquid dish detergent because they can be too harsh, rendering the oil sprays ineffective.

BACK TO TOP
Rinsing Hydro Growing Medium
Micro Nutrients And Their Effect On Cannabis Plants
Forcing cannabis to flower: How to speed up the flowering of outdoor marijuana plants

49 comments on “Dual Purpose Controls For Pests And Disease”