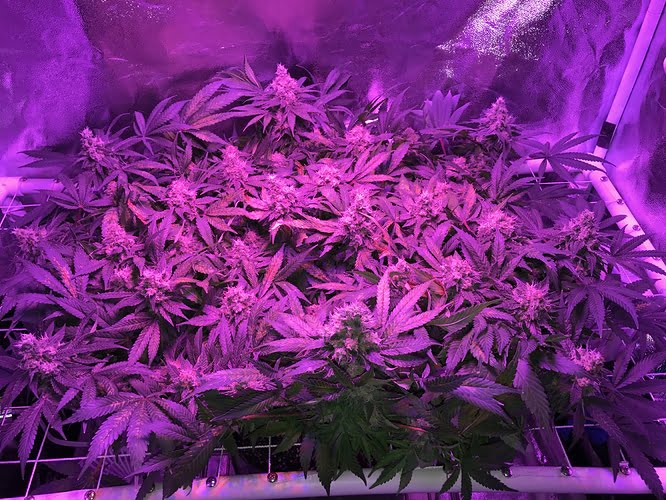 Newbie marijuana growers choose White Widow because of its resilience. It’s a strong plant capable of producing high yields both d outdoors. White Widow has spread all over and gained its status as a legendary strain.

The effect of smoking White Widow is a stellar high. Smokers will get a full cerebral high coming from this marijuana strain. It also has a pine-fresh feeling that you’ll feel with every hit followed by a hint of citrus when you exhale. No wonder many marijuana users favor this classic.

ILGM’s marijuana guarantees a high THC level at 18%. It’s also capable of producing a high yield and grow as tall as 120cm. To grow White Widow cannabis, you’ll need to expose the plan to a sunny or Mediterranean-like atmosphere. You can expect the average flowering period to be around 60 days.

Take a look at how a grower cultivated ILGM’s White Widow seed.

Starting this grow journal late but here are some details to help you catch up.

The seed was germinated in a 30-hour soak on February 27th and it sprouted on March 1st. She is in Fox Farm’s Ocean Fresh soil, and some Mykos. She won’t be receiving any nutes until flower but she will be scrogged, topped, and probably undergo a couple other training techniques.

And here are some photos on Day 29. You can see the plant was able to flourish and is growing new sets of leaves every week. There are no troubles in this grow so far.

On Day 32, a screen was installed but this young lady can’t reach it yet.’

This screen is 24 inches tall, 32 inches across, and 17 inches in length. Now that you’re all caught up, we can resume with the rest of the journal.

On her 34th day, she was watered with 1 gallon of tap water. It was pH 6.6 going in and pH 6.2 coming out with 1020 PPM. pH is a little low so it needs to be bumped up next watering. Other than that, she is looking great.

It’s another watering day for her. She received 1 gallon of tap water with pH 6.9 going in and pH 6.4 and 900PPM coming out.

She’s finally reached the screen. It won’t be long now before she starts spreading her leaves just a little bit more.

It’s feeding day once again and she received the same feeding as before with the result of pH 6.2 and 840PPM coming out. She had some pruning done at the bottom because she’s just too bushy.

She’s being flipped to 12/12 tonight. Wishing she could be SCROGGED some more. In preparation for her flip, she was fed with 5mL each of Advanced Nutrients Micro, Grow, and Bloom in 1 gallon tap water.

The tops look to be yellowing. This isn’t a reason to worry. New growth at this stage start more yellow and eventually darken up. This SCROG is looking good.

Watering day again. This time the water was pH 6.7 going in and pH 6.4 when coming out.

Another feeding day but this time, she’ll receive ½ strength Fox Farm nutes. This will go on until harvest. This solution was also supplemented with 1 tbsp Big Bloom, 1 tsp Grow Big, and 1 tsp Tiger Bloom. Going in, the pH and PPM were 6.5 and 600. They became 6.3 and 1000 respectively when coming out.

Just got back from Fort Rock and man… she has grown. The light has been lowered to about 14-15 inches from the tops now. This set up has two 23W 27k CFLs but some more lights could be added. She’s starting to flower.

On her 11th day of flowering, she received full strength nutes with 2 tbsp Big Bloom and 2 tsp Tiger Bloom. I also did more tucking probably for the last time. This tucking should be more than enough to see her through her harvest.

Another feeding day with 1 gallon tap water and full strength Fox Farm nutes. However, pH and PPM going in were 6.5 and 1130. Coming out, the readings were 6.0 and 1400. pH is lower than preferable but we shall see how she reacts. She’s also drinking more.

She’s looking good but she might be getting a build up from the pH being so low. She’s be watered a couple more times before being fed again. This time, she received 1 gallon of tap water, and almost full strength FF nutes with 1 tbsp Big Bloom and 1 tsp Tiger Bloom. The ingoing pH and PPM were 7.1 and 800 but the outgoing was 6.1 and 1700.

Watering again today with 1 gallon of tap water. Outgoing pH is still low at 6.1. No signs of issues yet but it’s difficult to make the pH come up. Really don’t want to flush her but it looks like she’s drinking up the nutes.

Today is watering day. Before they get drenched, here are some photos. Several leaves showed signs of what seem to be CalMag deficiency.

It’s watering day again with pH 6.8 going in and 6.4 coming out with 600PPM. It seems the last few waterings did the trick even without any fancy interventions. We’re halfway there with only 4-6 weeks left!

It’s feeding day and on the menu is 1 gallon of tap water, 1 tbsp Big Bloom, 2 tsp Tiger Bloom, 1 mL Epsom salt, and 1.5 tsp hydrogen peroxide. The leaves aren’t getting any better so some Epsom salts were added to help with the CalMag deficiency. The buds are looking good, filling in, and starting to fatten up.

pH is getting low again with a reading of 6.1 after she was watered with pH 6.6 tap water. She doesn’t seem to be showing any life-threatening signs anyway.

There were a couple of outages over the past few days but she doesn’t seem affected by them. She was fed with 1 gallon of tap water again mixed with 1 tbsp Big Bloom, 2 tsp Tiger Bloom, ¼ tsp Epsom salt, and 2 caps hydrogen peroxide. She certainly looks promising, don’t you think?

She was watered with 1 gallon of tap water with ½ tsp of Epsom salts. Harvest will take place in 8-10 days so no more nutes. The trichomes are mostly cloudy, with barely any hint of amber. Tried a sample of the popcorn buds at the very bottom and got a decent head high from them.

The stem was purposely split. It only took a few minutes and this should increase frostiness.

Trimming her took 6 but it’s well worth it. She should have another week or two but she had to come down because the next grow is about to happen.

The dry weight is well over 3 ounces and an ounce of sugar leaves. Definitely need to find a better way to dry. They are now in quart-sized mason jars for curing.

This grow had problems with soil pH but White Widow is tough and problems with acidity aren’t enough to bring it down. By simply watering, and providing a consistent mix of nutrients to the White Widow plant, the grower was able to see the plant through a successful harvest. The yield is also respectable considering it didn’t even complete its days in flower.

Do you think White Widow is a resilient plant?

BACK TO TOP
How to Grow Marijuana: Growing Weed for Beginners
What is the Entourage Effect?
How to Increase Trichome Production