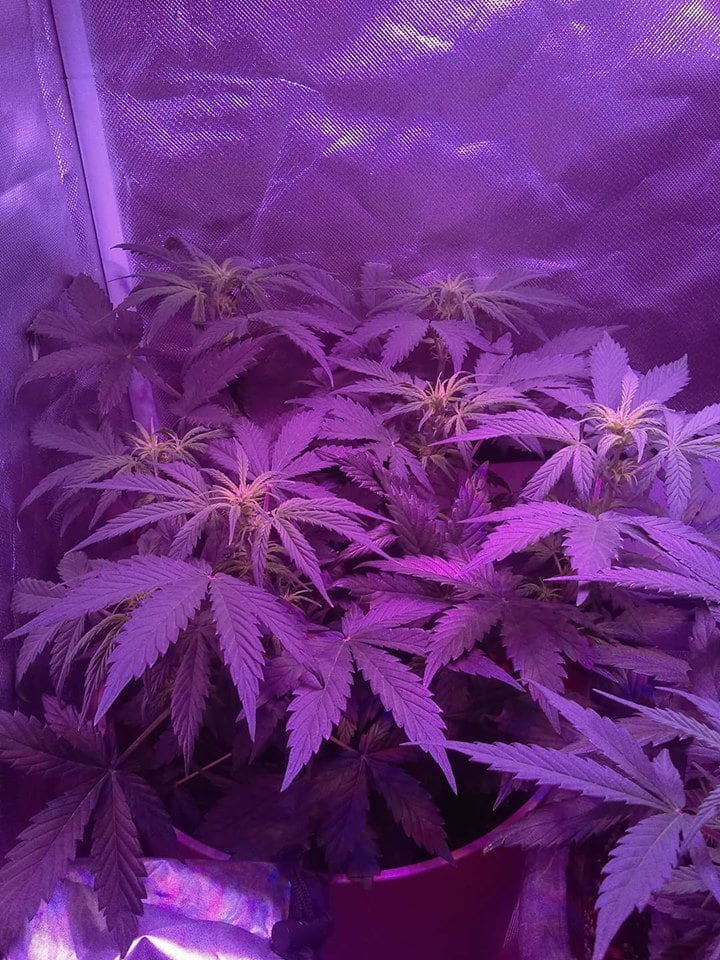 ILGM’s seeds came in today after they were ordered on March 10th. The site said to allow up to 25 days for delivery but ours came 14 days after we ordered them. Forums and reviews say these autoflowering seeds are ready to harvest in 10 weeks which means around 12 weeks from now, the household will be able to enjoy the fruits of this labor.

Today, the grow tent was put together. This is what the final setup looks like – before the lights were turned on.

These little stools are here to raise the pots closer to the light. With the pots on them, the light sits 5 inches or so above the soil. A fan on the left blows in the intake on the left and air is steadily coming out of the exhaust on the top. The tent is sitting at 74 degrees F with around 40% humidity.

Here’s the final look after the lighting was installed.

Forgot to take a picture of the germination pods before they were buried into the pots.

You may or may not be able to tell from the picture but they’re there. One has a little leaf off the top and the other is just a tiny curl up, but it’s there. Everything says it takes 3-7 days to see a sprout. They are doing well because it only took them 72 hours.

The little guy on the left is Snoop and the bigger one is Martha.

It’s officially the end of week one. It was a pretty exciting week. The humidifier is doing its job. It was placed on the floor level of the tent in the opposite corner from the fan blowing in and it has been keeping the humidity at a steady 53-57%.

Martha was also transplanted. She decided to grow sideways out of her germination packet. She was transferred from her 1 gallon pot to a 2.5 gallon pot filled with Fox Farms Ocean Fresh. Autoflowers don’t grow as big as the traditional strains so the best pot size is 2-3 gallons.

Both Martha and Snoop are misted 2-4 times a day.

Martha has been having some issues in her first week but she’ll make it just fine. She needed help to get her seed off which might be part of the reason why she’s a little lopsided. The seed casing was just removed as gently as possible and helped her open up a bit.

And this is Snoop with beautiful little leaves.

Martha’s growing stronger and Snoop was transplanted today. He’s now in a bigger pot. Since the weather here hasn’t caught up with the fact that it is spring tie, the temperature is running around 65 degrees at night, 73 during the day and the humidity is only 45 to 50%.

Seeing as how it needs to be between 50 and 70%, decided to keep the big humidifier for some help when RH is lower. As the season gets deeper from spring and into summer, humidity won’t be a factor.

Here they are – day two into week three!

The main concern as the plants get taller is LED lighting. These plants are only supposed to get 20 to 24 inches tall and the pots are a foot tall. Need to figure out a way to get the lighting rig closer to the top of the tent as these babies grow. Luckily, the plants have a few more weeks before that becomes a real concern.

Snoop’s starting his third level of leaves. In one more week, they leaves will be bent over to allow light to get to the lower parts. He’s growing stronger every day.

Martha is also starting her third level of leaves. She was behind Snoop in her growth from having her seed helmet stunt her growth but she’s bounced back nicely. An amazing feature of this cannabis strain is its resilience.

Had to make some minor adjustments.

A guy from one of the forums recommended a pulley system from Amazon to adjust the light’s distance from the plants without having to adjust the height of the plants. They were $6 on Amazon. They should be here tomorrow.

The one humidifier finally died. It was replaced with a warm mist humidifier. With the fan on a medium setting, the tent is now around 73 degrees with 57% humidity. These little babies are starting to really take off. Another three weeks or so and they should start flowering.

Today, the pulley system came in. The lights were lowered to 12 inches above the plants. They’ll probably be brought back up because 12 inches is pretty close but this distance will be maintained for a day or so. If they start showing signs of stress, the setup will be tweaked. They’re pretty resilient anyway so they should be okay.

It was surprising to see how Snoop and Martha were doing. All along they were doing really well especially after they were exposed to the warm mist humidifier with lowered lights but until last night, it wasn’t obvious just how well they were actually doing.

Underneath the top layer of leaves is a bunch of little sprout leaves! Probably another week or so and they’ll get bent to let light to the lower parts. It’s starting to smell green in the bedroom though and it’s lovely.

Four weeks have passed and the plants are entering Week 5.

After checking on the pants today, a yellow spot was revealed on one of Martha’s top leaves and a yellowing on one of Snoop’s mid-level leaves. It can be light burn so the lights had to be raised a couple of inches to see how that goes.

Despite the discoloration, they’re both happy and perky.

Today is a sad day. A couple of days ago, the tops were tied to get them bent over for light to hit the small leaves trying to grow underneath. This morning, the ties were removed to let them do their thing until it was time for the SCROG netting.

In the process of untying Martha, her top leaves were snapped off. Sat there for a cool minute staring at it. After apologizing to her, the tent was zipped up. The broken pieces were placed on the PS3 by the TV as an offering to the marijuana gods to still bless the plants.

Can’t believe it’s been almost seven weeks since these babies started. It’s astounding to see their beauty every time tent is opened to see how they’re doing. Accidentally topping Martha didn’t really do much except make her bushier. Snoop is a bit taller than she is, but she’s going to make it just time.

The flowers are starting to develop pretty well on both of them. Snoop’s main cola is going to be fairly decent-sized. The light green areas in the middle of the leaves are all probably going to be buds.

They’re both coming along nicely. Anyone would be feeling pretty good about it.

The way Martha has bushed out and shot up in the past couple of days is amazing. She was supposed to have something underneath her to raise her to the same height as Snoop but when after looking at them this afternoon, she’s almost caught up with him.

Of course, she’s not going to be quite as tall as Snoops because he still has his top main cola but she’s pretty close – and she’s nice and bushy too, which is a good sign.

It seems the tent has enough height to handle these two because there’s still a good 8 to 10 inches of space between the top of them and the light. Now, they’re bushing out more than growing tall, which apparently is a good thing. Bushy plants yield more than tall, lanky plants.

They’re starting to form their buds with these crystals and pistils shooting off the flowers so now is a pretty magical time in the growth phase. Being a first grow, every little change is a cause for excitement and great pride. They’ve only been watered with reverse osmosis water but it didn’t seem to affect their growth.

Not much to update. Just some pics.

Haven’t been doing much other than watering and filling up the humidifier twice a day but you can really tell the buds are starting to form really well. They’ve grown tall and should just be a few weeks now – maybe three or four weeks.

Here’s to hoping they don’t grow too much vertically because the light is almost as high as it will go.

These babies are getting red pistils already but they’re not real fat buds. They’re only 0.5inches across but they’re still pretty nice. The white hairs on top mean they’re still growing some. This is the earliest maturity stage. After that, the trichomes start turning amber as the THC degrades. The amber THC is what has the sleep effect so the more amber the more couch lock. Good stoner smoke is about 50%.

Went ahead and harvested Snoop but Martha will keep on going for another week or so because she’s a little behind Snoopy.

Checked on Martha and she was pretty milky. Decided to go ahead and harvest her too. They were placed on mesh dryer nets and now they’re hanging in the tent with the fan on and the lights off.

And here’s a photo of Martha and Snoop in their new home for drying.

Even if you’re a first-time marijuana grower, you can never go wrong with White Widow seeds from ILGM! This grow journal showed the growing process can be easy, breezy and successful!

What was the first marijuana strain you cultivated?

BACK TO TOP
Preparation of Water for Irrigation of Cannabis
Snails and Slugs On Marijuana Plants
Bud washing: The what, why, and how