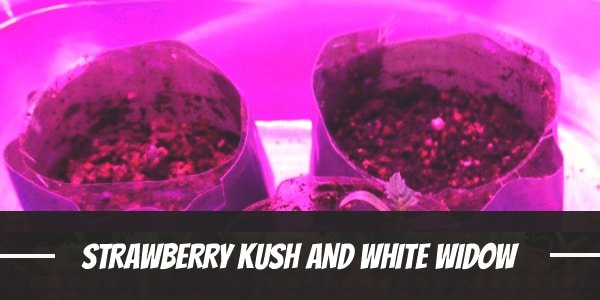 Experienced cannabis growers tend to push the boundaries. After every harvest, they try to see how far they can go. This grow journal shows the challenges of growing two different strains of marijuana plants at the same time. Can they all survive until harvest time?

Within hours of soaking in a cup of water, they cracked right away! They’re now watered and in soil. It’s just a waiting game at this point.

Today brought some good news and bad news. The vegetable box was running way too hot and it might have cooked the Strawberry Kush and the White Widow. The SK still sprouted but again, it might have been cooked.

Luckily, two backup WWs were already soaked in a cup of water for 24 hours and they were just planted. They haven’t sprouted yet but no worries. This would give just enough time to set up their grow tent. This is how everything looks right now.

After many impatient mistakes, this is what we end up with.

The two up front are ILGM White Widow and the two in the back are ILGM Strawberry Kush. They all germinated just days apart and receive watering with a spoon whenever needed. The lights are on 24/7. Once they’re big enough, their clones will be placed in a self-sustaining vegetable box.

This grow is down to one White Widow and two Strawberry Kush. It’s okay though. The tent isn’t big enough for four plants. The remaining plants are surviving but that one White Widow is way ahead of everyone! She was just watered yesterday with two tablespoons of filtered water from the tap.

Look at them reaching for the skies! The White Widow really is the most competitive plant of the bunch. The two are not that far behind though. All the girls are spoon-fed with the same type of water. Yesterday, the last Strawberry Kush started to show a little green. This happened in time to switch their light cycle to 18/6.

After this photo was taken, the White Widow moved out of her tiny homemade pot. Let’s see how this goes.

It’s moving time for the two Strawberry Kush plants as well. This makeshift pot is made out of a tea jug. It’s probably a little early but I didn’t want the roots to get stuck at the bottom when I cut the holes for drainage. The roots might get damaged.

Here are some photos after they received some filtered water from the tap. Temperatures are also good. The highest was 84°F and the lowest was 63°F.

They still have a long way to go.

This is how the Strawberry Kush decided to start her day. Her leaves look a little raggedy but maybe this is because she’s kept cooler at night, usually with the temperature around the 60s. We may have to adjust the temperature the 70s.

The White Widow is in her final home now. She had a wonderful root system coming out at the bottom.

The two Strawberry Kush plants are still one pot away from their final home.

You can tell everything is going just fine. Hope this grow cycle doesn’t have any problems.

All three girls are in their final homes! After running out of big pots, they had to make do with the next best things: milk jugs! The White Widow was already topped. You can see in the photos that the two Strawberry Kush are different phenotypes. One is very sativa-looking and the other one is definitely indica.

The White Widow Lady finally had her first feeding and just look at her! You can tell she really loved it. She looks so happy even hours after feeding.

Just got done topping these two Strawberry Kush plants. This should give them 4 colas which will produce bigger buds and give a greater yield than the un-topped plant.

The White Widow grew another set of branches where she was cropped. Just look at this beauty.

And here are the Strawberry Kush just doing their thing.

The Strawberry Kush received ½ tsp of Grow Big and 1 tsp of Big Bloom today. The sativa-looking phenotype looks amazing. And the indica-looking one isn’t too shabby either.

Here’s a photo of the White Widow. She’s looking beautiful despite a slight CalMag issue. It feels good to know you solved a problem by yourself!

Check this out. I’m mainlining the sativa-looking phenotype. The veg phase was lasting longer than expected so this may be a good time to mainline one of the Strawberry Kush plants. The other one won’t undergo mainlining.

And here is the White Widow also not being mainlined.

The ladies had some sort of bug/mite/aphid problem. Good they’re all gone now thanks to some DE.

I stopped doing anything to the plants to try and isolate what’s going on with the. First up is the White Widow. She’s growing nice and steady but the leaves have these brown, rusty spots.

And the indica-type Strawberry Kush has the same problems.

Based on information from the internet, it might be spot fungus.

Despite the small issue with the leaves, look at this super crop!

They didn’t receive anything special other than being tucked under the screen.

So after a soil test, the pH is 6.0. This can also cause a magnesium deficiency. These may be what are causing those rust-colored necrotic spots on the leaves. Hopefully, watering with distilled water at pH 7.0 should resolve this.

Here’s how the ladies look like now. They look better than they did a couple of days ago. This continued flushing should get the problem to completely stop.

In what seems like forever, the ladies have reached a milestone! These lovely ladies will be in 36 hours of darkness to begin flowering!

The ladies are hyped today! They’ll receive light from the Mars 3000 from now on. The two 2700k CFLs were just too weak for them. With two more clip fans coming, there would be more room for buds!

This is their 4th day of a 12/12 light cycle and you can almost see hairs.

Finally got some nice visible hairs down there on one Strawberry Kush and the White Widow. And now the fun begins.

Got my hands on this propagation dome, a blueberry clone (already rooted) and some awesome looking bag seed that’s most likely feminized.

Now an update on the girls. They grew bit but other than that, there aren’t any huge changes. Now that it’s possible, maybe we’ll take some clones later today.

This is the first time the girls will have their photo taken under regular light. Just imagine all the good times we’re going to have together.

On a bad note, the rooted Blueberry clone died after being left on top of the heating mat where the other clones are trying to root.

Getting ready to make a clone army! I took some last minute clones from the White Widow and two more from the Strawberry Kush to make five clones. Here’s a photo of them.

Here are some mugshots of the Strawberry Kush. This is definitely not one of the strong-smelling strains.

Just a little water and CalMag today! You never get tired of looking at them especially when they look this great!

Seems like the plants ran into a nitrogen deficiency. Soil pH was in check. The ladies received three-quarters strength Big Bloom and Tiger Bloom one watering ago. Some leaves have been falling off.

It wasn’t actually a deficiency. They leaves just weren’t getting a lot of sunlight. Here they are now after some much needed trim. They were also watered with pH-ed distilled water.

The White Widow was a bit worrisome but there’s much you can do at this point. The Strawberry Kush is still flourishing.

After a half-strength feeding, their brown stains didn’t spread anymore. Here they are now.

Got some more photos earlier today and the Strawberry Kush looks like it’s almost done!

Here’s the first one chopped! This is at seven and a half weeks. The next one will get harvested in a week or two.

Here is Strawberry Kush #2! She’s just hanging around after harvest.

And here is the last one of their generation! Chop-chop goes the last lady.

You can see the top of the colas for all three harvests weren’t as dense as the middle and lower parts. It may be because the canopy was too thick. More pruning would have improved bud formation down the colas.

The clones are thriving well but that’s for another grow journal!

This grow journal ends with a bountiful harvest but there’s still some room for improvement. There’s even an attempt to push boundaries and grow clones. What improvements would you suggest for the next grow?