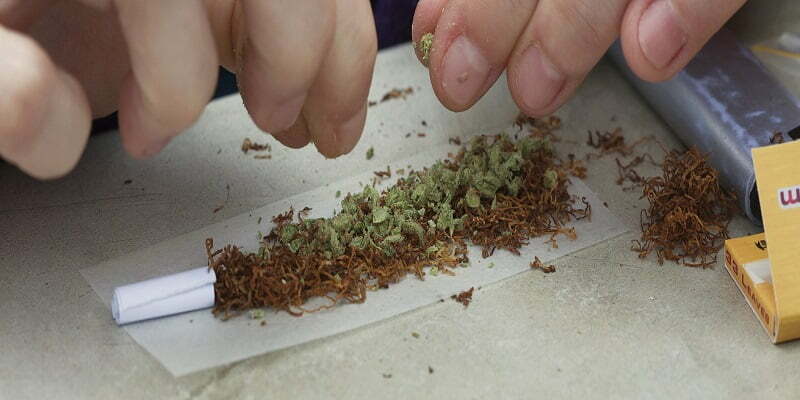 Many doctors advise that patients who have impaired immune systems sterilize any and all marijuana that they use. They might just be saying this as safety precaution rather than to thwart any dangers of infection. Even so, a few people have gotten sick as a result of infected marijuana. This occurs especially with aspergillosis—a lung infection caused by inhalation of spores from the aspergillus fungus. This is particularly dangerous to HIV patients.

Aspergillus and other pathogens like it need moisture to promote their growth. Controlling any dampness before it hits is vital to preventing any contamination. In general, marijuana needs to be dried to around 10 to 15% water content to avoid any fungal growth (it becomes too brittle below 10%). A stale or moldy odor is a good sign that your plants may have been contaminated.

In practice, however, it’s difficult to ascertain exactly when marijuana has become contaminated, particularly if the grower or user has not kept tabs on its preparation. That’s why sterilization can be rather important to avoid any pathogen infections. You might expect pathogens to die in the combustion produced by burning the marijuana, but the smoke actually passes through cooler, unburned material allowing the pathogens to survive in the smoke stream.

Although the risk of infection is low, it’s still recommended that patients with weak immune systems try to ensure that there are no pathogens before using marijuana. The easiest way to do this is by literally baking the marijuana with a home oven. You can set the temperature to 300*F (150*C) for five minutes to sufficiently destroy aspergillus. Avoid overheating the marijuana because THC vaporizes at higher temperatures. Another way to accomplish sterilization is through gamma irradiation, a method used by the Dutch to sterilize medical marijuana.

Sometimes, marijuana will become noticeably moldy. Mold can grow at several stages of the marijuana’s life including in the field, in improperly dried packages, or in damp storage conditions. The mold will be visible when the marijuana is unpacked making the plant entirely unusable. Even if the mold is killed, fungal toxins will persist and cannot be removed.

The “ripe” marijuana bud is the portion of the plant that is utilized for smoking. For an even burn and a pleasant smoke, properly prepared bud should lack any sticks or seeds because they produce a harsh and unpleasant smoke. Marijuana leaf’s low potency and harsh “dry” smoke make it more palatable for processed products.

For the most part, any domestically-grown marijuana is seedless sinsemilla. Many marijuana imports (like that from Mexico) can contain a large amount of seeds. These need to be removed before the marijuana is smoked because they will pop when heated. The pop can send a very hot particle in any direction. The smoke from burning seed is also very unpleasant and has been said to give some patients a headache.

To remove seeds efficiently, you need to break several marijuana buds up by cutting them with scissors. This allows the seeds to be released from the vegetation. At this stage, remove any small twigs, but don’t try to remove the seeds just yet as it will be too tedious.

Most people remove the seeds with their fingers but this can cause resin glands to break off and stick to the skin. After the first layer of glands stick, the rest will naturally follow suit. If you’re manicuring large amounts, a layer will eventually build up that is thick enough to be rubbed off the fingers. This mixture of cannabis glands and human oils is a form of hashish that can actually be smoked. Since it has a rather large gland concentration, it will be much more potent than regular buds.

If you’re only cleansing enough for a few joint, then just a thin layer of glands will build up. It cannot be simply peeled or rubbed off the skin, although tissue and soap can get it off for you. In any event, it’s lost.

A partial solution to this is to cut up the buds with scissors. Not as many glands will stick to the scissors and the ones that do can eventually be scraped off. Regardless, many of the glands will never make it to the joint.

The best way to remove seeds

The best way to remove marijuana seeds is with a “rolling tray” which can be as easy as a shoebox top, a plate, or a screen device. Place the grass at the lower end of a slightly-angled tray. With a business card, playing card, or canceled credit card, simply push the vegetation and seeds toward the top up the slightly-angled slope. The heavy, slightly oval seeds will roll down to the bottom while the vegetation will stay in place. Continue doing this until the seeds stop rolling down. Then look for any hidden seeds and gently nudge them so they start rolling. When all seeds have been eradicated, the marijuana is then ready for use.

Sinsemilla is handled much differently. Seeing as how there aren’t any seeds, the buds don’t have to be sliced up for cleansing. They only need to be cut or ground finely enough to be rolled into a joint or placed in the bowl of a pipe. With a photographer’s loupe, you can see the glands on the surfaces of the buds and leaves. The heads of these glands contain THC. Take caution not to break these glands because they will snap at the slightest provocation. This decreased the usable amount of THC.

1 comments on “Sterilize Marijuana And Prepare For Smoking”