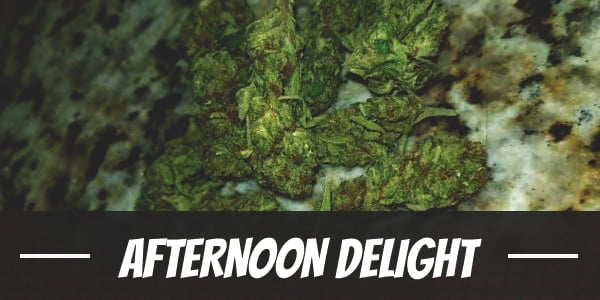 Afternoon Delight embodies the promise of its moniker. It crushes stress as it cradles users on a cloud of euphoria. Uplifting the mood is a sense of happiness that forms within. It puts users in a state of serene tranquility as its bodily effects begin to take over.

One of Afternoon’s Delight most distinct features is its sedating comedown in spite of its Sativa-leaning genes. This can be attributed to its Banana Kush, a hybrid with an upbeat onset and a heavy-hitting buzz that settles in the limbs before lulling enthusiasts to bed. Meanwhile, its potent Sativa features are from Schrom and Tangie which Colorado Seed Inc. chose for its potency, flavor, and restorative benefits.

With 18% to 22% THC, Afternoon Delight is usually reserved for seasoned users. It can deliver an overwhelming head high or powerful couch lock when used beyond personal tolerance levels. Beginners may still enjoy the strain through pacing and moderation.

Afternoon Delight is a predominantly Sativa strain with an interesting effect. It has a stress-crushing buzz that ease worries in the mind as it relaxes the body. It is best used in the afternoon as its head to toe high may sometimes lull users to the couch or bed for a quick nap.

During the onset, it delivers an uplifting buzz that instantly changes the mood. Users smile more as it clears the mind of negativity. Replacing it are happy memories that amplify the upbeat disposition.

After about an hour or two, a light pressure kneads the muscles all over the body. It starts at the temples, releasing the tension that makes the forehead crease, before moving down to the toes. It blankets users in hazy relaxation.

Although rare, it is possible for users to become drowsy a few hours after using Afternoon Delight. Its euphoric buzz settles in the limbs and weighs the body down as it continues to persist. It gently cradles users to bed with its soothing euphoria.

Afternoon Delight is a pungent strain due to its potency. It has a fruity aroma with overtones of grapefruit which tantalizes the senses. Enhancing it is a complimentary tangy skunk. Breaking it apart reveals its refreshing pine undertones which intensify after combustion.

Afternoon Delight is a delight to the senses. It is like a tropical shake that bursts with sweetness of citrus and grapefruit in the palate. Coating the tongue is the taste of skunk with a hint of wood. On the exhale, it leaves an aftertaste of pine which refreshes the mouth.

Apart from a cottonmouth, users may also experience a condition called greening out. The symptoms usually range from a headache to a disorienting dizziness that triggers anxiety. At times, however, it can be a subtle but unsettling feeling of paranoia. It is usually the result of over consumption, but one’s disposition before the high may also be a factor. Moderation is essential to keep the experience pleasant when toking Afternoon Delight.

Afternoon Delight’s range of uses also include therapeutic reprieve. It has up to 1% CBD that, along with other cannabinoids such as THC or terpenes, provides patients comfort against various afflictions.

Its uplifting high, for instance, has a positive effect on chronic stress. It appeases the overwhelm feeling of dreadfulness that one experiences when over worked. Its ability to soothe worries assists patients with anxiety in calming down. In temporarily suppressing negativity, it improves the mood while also managing symptoms of mental health issues associated with depression.

It has a soothing buzz that tranquilizes aches and pains that fatigue the body. It relaxes users and releases tensions that tightens the muscle. It eases cramps that prevent one from moving around properly.

Its ability to put users into a state of tranquility hastens the onset of its sedating properties. In all likelihood, one will want to go to bed early and wake up feeling invigorated the next day. Not to mention, it enhances the quality and quantity of sleep.

Afternoon Delights exhibits more Sativa qualities in the grow room. It stretches tall and has a preference for a warmer, more Mediterranean-like environment. Not to mention, its buds are fluffy and taper on each end.

This is not to say that the plant has troubles growing in the northern hemisphere. In fact, it is rather sturdy due to the Indica influence of its parents. It will still need to be protected against harsh weather conditions such as heavy rains that will stunt its growth. Early winters are also another factor to look into as it may kill the plant overnight.

Alternatively, growers may move the plant indoors. It allows for better control over growing factors like temperature, lighting, and humidity. Pruning away dead branches and stalks is essential for better nutrient circulation to healthier budding sites. Along with is topping which will keep the plant short in a small growing space.

The Screen of Green works best with Afternoon Delight. To do this, growers must install a screen above the current canopy and then weaving branches into it. It manages height by keeping the plant from going beyond where the net is situated. At the same time, it encourages bud production since it evens out light distribution by bringing up the lower nodes.

Afternoon Delight flowers quickly, fully maturing at 8 to 10 weeks. Each square meter yields between 12 to 16 ounces of buds.

In the northern hemisphere, Afternoon Delight blooms from the middle of October up to the last few days of the same month. Growers can expect at least 12 ounces of buds per plant once ready for harvest.

Have you ever smoked or grown your own Afternoon Delight? Please let me know what you think about this marijuana strain in the comments below.