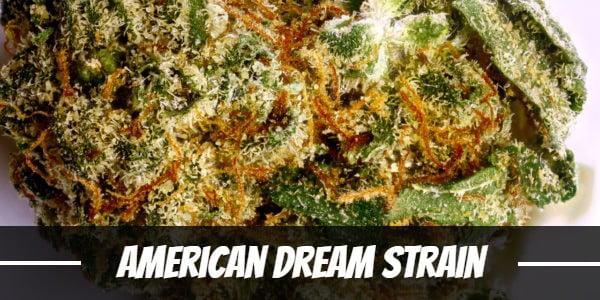 On the American Dream, Historian James Truslow Adams had this to say. “Life should be better, richer and fuller for everyone.” For many cannabis users, that sounds like the way they live their life. In fact, after a few tokes, that is what life feels like, and that it is good.

So, the promise of the American Dream strain is this. It will deliver users to a new land where everything feels so much better. It is a place where people can relax and let the creative juices flow.

Using a selected Afghan Skunk genotype, the breeder crossed it with both the Jamaican and Hawaiian Sativa strains.

From one generation to the next. It is the wish of Sensi Seeds that each succeeding ones will be more successful than the previous one. Hence, they named this strain the American Dream. After pouring in everything they could to grow this strain, they believe that it is better than its parents. As such, it deserves to reach as many marijuana users as it could.

Upon understanding how the American Dream works, it will be clear why it is one of the best strains ever created.

At its onset, it starts by delivering a gentle sensation that sweeps over the body. Not only does it feel uplifting but it also induces a complete body relaxation. Feeling a little lighter, users tend to be cheerful and more sociable.

Even as the effects continue to work on the body, its Sativa effects become more pronounced. Instead of a hazy mental high, users have a boost in their creative thinking. Furthermore, it helps that they also have a heightened sense of focus.

Compared to other Indica-dominant strains, the American Dream does not lead to couch-lock. In other words, they can do tasks better and feel relaxed while doing so.

It has a THC content level of 18% at most, which makes it a tad bit above average, though. It means that people should not underestimate the strain. Otherwise, like any marijuana, the effects can become overwhelming.

The American Dream strain is suitable for both daytime and evening use. It is even better when sharing with a small group of friends. Finally, it is one cannabis that is ideal for novice users or first timers.

Some people do whatever it takes in the pursuit of the American Dream. Like them, the strain announces itself with a pungent odor of skunk and earth with a sharp tone of pine. In a sense, growers have no choice but to smell its scent. Unfortunately, that means neighbors can detect it too, which is why raisers need to control its odor. We will have more on this in another section.

Carrying over to its taste, the American Dream also has a sweet and woody flavor mixed in.

Until now, the only reported negative reaction with the use American Dream is dry mouth and eyes. As all cannabis users know, they are typical with the use of marijuana and becomes more pronounced once over using.

Other than that, it does not cause paranoia, anxiety, dizziness or headaches that may also occur like most other strains. Once again, the American Dream proves how good it is here.

The top reason why marijuana should be legal is due to its medical use. In fact, most of the states or countries that do allow people to use marijuana are limited to such usage.

Looking to buy seeds like American Dream? Check out our marijuana seed bank.

People with illnesses dream of the day when the chronic pains and aches they feel vanishes. The American Dream will make that a reality. Keep in mind, though, that the claims to pain relief are anecdotal. And that brings to mind the massive industry of supplementation. All the benefits of using dietary supplements are the same as using cannabis for health reasons – the FDA does not substantiate them.

The American Dream not only can deal with inflammation but it can do other things as well. It’s uplifting and uniquely relaxing effects eases away the stress, for instance. People suffering from depression, PTSD, and others, will find using the strain helpful.

The American Dream grows like a typical Indica plant. So, growers can expect it to be on the shorter side as well as bushier. Of course, that is good because bushy plants tend to have larger buds.

If can grow in outdoor and indoor, and as mentioned, it emits a pungent odor. If privacy is a concern, then it is better grown indoor. Even so, growers will have to use a carbon-activated filter to remove the smell as air is vented out from its indoor habitat.

Also, another thing to consider is to use the Screen of Green training technique. This marijuana plant is adaptable to this method and will thrive even better.

Growers will understand what the American dream is when the plant becomes ready to flower in seven weeks. It will not be long when they hold in their hands 16 to 20 ounces per square meters of beautiful jungle green buds.

The plant grows very well in a Mediterranean-like climate. Assuming that planting outdoor is not a concern, the American Dream will be ready by the end of September to early October. Each plant can have a yield of 16 ounces.

What is the American dream strain yield?

How much THC does American dream have?

What are the origins of the American dream strain?

American dream was created from a mix between Afghan Skunk, Jamaican and Hawaiian Sativa

Have you ever smoked or grown your own American Dream? Please let me know what you think about this marijuana strain in the comments below.