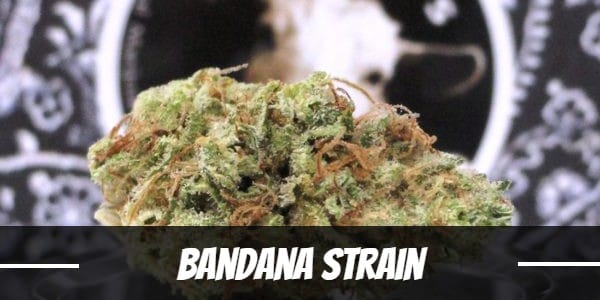 Bandana is known for its mild yet mentally stimulating effects. It sends a cerebral rush that gets users talking and buzzing with excitement. The energizing banana and coffee flavors have also helped catapult its name to fame. But, the high level of CBD is its most significant benefit.

In 2011, AlphaKronik Genes released their version using 707 Headband paired with a backcrossed Snowdawg. However, there is an earlier variety that goes by the same name from an unknown breeder. Although both have some similarities, by and large, they do entirely different plants. One fundamental difference is that the original is is mostly Indica while the new hybrid is predominantly Sativa.

The original Bandana appears to be no longer available, though. Still, many people continue to seek it due to its signature fragrance and flavors. Nowadays, the closest one can get to it is the variant developed by Alphakronik. A generally mild strain, it may not appeal to hardcore users, but it does cater to the needs of casual users. At the same time, it has also proven itself to be highly beneficial in the medical scene.

Bandana, on average, contains 13% THC. In some batches though, it could also be as low as 5%. Compared to modern hybrids, it appears as a weak and, at best, is an average strain. However, it does have value in two niches. One is the market for beginners and casual marijuana users. Another and far more significant is the medical community.

We don’t currently sell Bandana. Check out other sativa dominant seeds in our marijuana seed bank.

As a recreational strain, Bandana helps bring down the wall of inhibition in users. Its mild euphoric high turns people sociable and talkative. In a nutshell, it is a feel-good strain that puts one in an upbeat and cheerful mood. And, that makes it a great addition to the list of weeds that are best shared with friends.

In time, a calming sensation washes over the body. Complementing the cerebral high, this uplifting sensation promotes body relaxation, one that is subtle and will not make users feel lazy.

The intense fragrance of sweet bananas is very evident in Bandana. On closer inspection, a second whiff reveals notes of damp earth. A tangy and citrusy smell becomes apparent as the buds get crushed.

Bandana boasts of the flavors of banana and coffee; it is a perfect breakfast mix for a fun-filled day ahead. It also has a tantalizing zest of citrus. On the exhale, the clear aftertaste of sweet flowers and earth dominate the palate.

Like others, Bandana comes with the usual dryness of eyes and mouth. It is typical of marijuana use and usually goes away hours after the session.

Although unlikely, it remains a possibility that a few people might experience a slight increase in the level of anxiousness. Also, it could potentially cause some to feel a bit paranoid. On this note, users are not to ever underestimate its relatively average potency. Use it in an excessive amount and its psychedelic effects can be very intense.

At 3%, Bandana’s CBD value is far beyond that of regular hybrids, and much more akin to medical ones. As such, one of its primary benefits is in managing body aches including stomachaches and headaches.

Looking to buy seeds like Barbara Bud? Check out our marijuana seed bank.

Apart from pain relief, its gentle cerebral high combined with relaxing qualities can help improve the mood. In turn, this helps people deal with stress and conditions such as depression, PTSD, and bipolar disorder.

Another way that people use this is to combat fatigue. During the height of the psychedelic high, the tendency is for people to feel reinvigorated. While it may not necessarily pump in the seemingly limitless energy that some high THC Sativa strains do, it is quite capable of motivating people to complete chores.

Like 707 Headband, Bandana does not have sturdy branches. Due to the weight of the flowers, it may droop. Hence, growers may have to provide support.

During the vegetative stage, it may appear to be a squat plant often reaching 3 feet only. However, as it approaches the flowering phase, it can quickly reach 7 feet tall. In the weeks leading to its harvest, it is best to apply low-stress training to stimulate the production of flowers.

Apart from stretching, the initial weeks of the blooming stage reveal Bandana’s beautiful mint colored buds. Shaped like spades, they are large and coated thickly with trichomes that shimmer under the light. Giving depth to its color are the surrounding amber hairs.

The flowering period, once it begins, takes 10 to 11 weeks. While it may sound like a long time, that is typical of Sativa plants. One advantage of extended bloom phase is that it allows for the production of more flowers. During harvest, growers can expect up to 16 ounces of buds.

Bandana should thrive well in a Mediterranean-like climate. By early November, it should produce 16 ounces of buds or more per plant.

What is the Bandana strain yield?

How much THC does Bandana have?

What are the origins of the Bandana strain?

Have you ever smoked or grown your own Bandana? Please let me know what you think about this marijuana strain in the comments below.