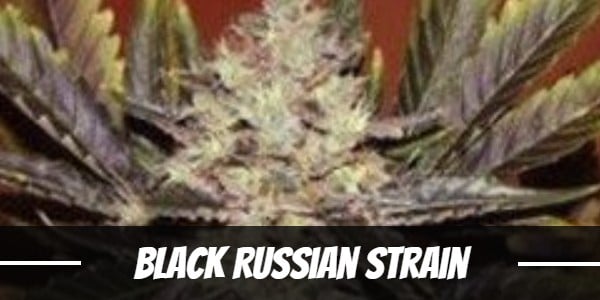 Black Russian is among a select group of jet black strains that trace their origins back to Vietnamese landraces.

Under the light, their crimson red and deep wine colors shine through.

And, when grown in warm temperatures, they sport a lighter shade of red with flashes of gold.

Regardless, these inky buds are made of black cannabis magic whose potency is an open secret.

This hybrid carries the genes of two spectacular Indica-dominant strains.

First, Delicious Seeds took the award-winning White Russian for its noteworthy cerebral psychedelic and pharmacological use.

Furthermore, this plant was once the world’s strongest strain.

Enhancing the former’s structure and improving its terpenes is Domina, a phenotype of the world-famous Black Domina.

This variety is a staple in the seedbanks of Spain for its excellent grow.

With Black Domina’s looks and flavors and White Russian’s immense therapeutic value, the resulting hybrid is nothing short of amazing.

Sold only in medical dispensaries, this highly beneficial strain comforts those suffering from certain mental and physical conditions.

Black Russian personifies the age-old adage of ‘a little goes a long way.’ A single toke takes users to an out-of-this-world psychedelic trip.

And, during the comedown, gently tucks them to sleep. But, before anything else, it clears the mind of negativity.

Though the bud only has a little bit of Sativa, it still can uplift the spirit and inspire a sense of happiness from within.

Looking to buy seeds like Black Russian? Check out our marijuana seed bank.

Aside from the gentle euphoria, it also stimulates the appetite. In time, the urge to eat becomes stronger.

Thus, users end up hunting for food in the kitchen. But, to make things easier, snacks should be prepared somewhere within arm’s reach.

It creeps into the body beginning from the forehead and spreads towards the limbs.

Although intense, it is nonetheless relaxing. A soothing heaviness calming the muscles later leads to deep slumber.

Alluding to its potency is Black Russian’s pungent but fragrant odor.

It smells of lemon and citrus that, with just one whiff, can energize virtually any body that comes in contact with it.

Black Russian is like a refreshing tropical drink that quenches thirst on a hot day. Its energizing citric flavors of sweet berries and lemon burst in the palate. Even on the exhale, the aftertaste remains a fruity treat.

This is understandable as intense head highs often distort the user’s perception of reality.

Most of the time, the effects vary from some slight dizziness to a mild headache.

But overusing the bud can trigger paranoia. Pacing and moderation is the way to go for users who want to avoid this possibility.

Dehydration is quite common when vaping or smoking cannabis so this truly comes as no surprise to seasoned users.

Although beginners may want to down some water before and after the high to avoid discomfort.

Black Russian’s potent psychoactive compounds and unique terpenes go beyond the recreational. They are for providing therapeutic relief to a wide array of medical issues.

Looking to buy seeds like Black Russian? Check out our marijuana seed bank.

It possesses mood enhancing qualities that alleviate symptoms of depression and PTSD.

It invites happiness in and converts negativity into full-on happiness. Moreover, it keeps stress at bay with its uplifting high.

Meanwhile, the citric fragrance and flavors of Black Russian tantalize the senses.

And, together with its other compounds, can stimulate the appetite. This makes it invaluable to users who have undergone chemotherapy or those recovering from anorexia.

An aftereffect of taking this natural muscle relaxant is easing the gastrointestinal pain which often causes nausea.

Without the bothersome mental and physical discomfort, it becomes difficult to say no to Black Russian’s sedative effects.

On the horizon is sleep and all its restorative benefits.

Black Russian is one of the most prolific plants in the marijuana industry. The plant’s compact buds give the illusion of precious gems in that their crystal coating of trichomes shimmer against a dark backdrop.

Apart from its excellent yield, growers are attracted to Black Russian because of its easy grow.

Largely thanks to its parents, the Black Domina dame and the male White Russian, the hardy herb requires little upkeep throughout its short flowering period.

The need to constantly trim is removed because the plant itself is naturally short with less than a few leaves growing between its buds.

Not only that, the seeds of the well-branched Black Russian are available in feminized form.

This turns the whole process into a joy as growers need not worry about their plants turning into males or hermaphrodites.

Even inside an artificial environment, Black Russian yields well; producing up to 16 ounces of buds per square meter after a flowering period of 7 to 8 weeks.

What is the Black Russian strain yield?

How much THC does Black Russian have?

What are the origins of the Black Russian strain?

Have you ever smoked or grown your own Black Russian? Please let me know what you think about this marijuana strain in the comments below.