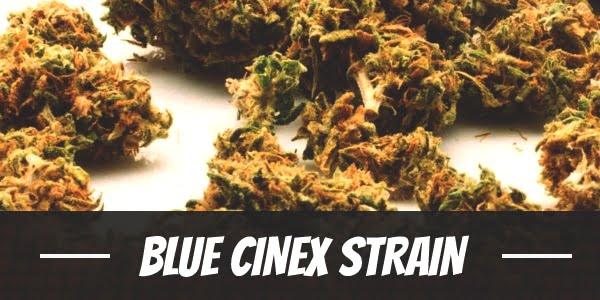 Blue Cinex provides the longevity that many enthusiasts long for. The creeper likes to take its time from the onset to the comedown. The ride starts way before the first puff – with its aromatic blueberry and herbal aroma which gently invigorates the senses.

Almost a quarter of an hour from the first puff, it begins to uplift the mood and clear the mind. Complementing it is a rise in energy which enhances motivations. The clarity and improved focus lasts for hours before eventually settling into a contented relaxation.

Testing around 22% THC on average, one could say that Blue Cinex is a thrill seeker’s strain. Beginners may want to tread lightly as it could easily overwhelm the mind if used beyond moderation. Most of the time, however, its side effects are only limited to dry eyes and a cottonmouth.

It gains its excellent effects from Blue Dream and Cinex. The former is a legend among West Coast strains for its full-bodied effects and versatility. Meanwhile, the latter is a great companion to a long workday.

Blue Cinex tends to take its time during the onset. Usually, its effects do not start until after 15 minutes have passed since the first toke. Surprisingly, its effects are not as heavy-hitting. Instead, it is a gentle rush of energy that uplifts the mood, clears the mind, and invigorates the body.

Casual users will find that it is an excellent wake-and-bake strain. Its mentally clarifying onset, as well as the casual mood lift, dismantle the wall that makes it difficult to start projects or assignments. Coupled with sharpened senses, it becomes easier to concentrate on work.

Complementing the productive euphoria is the initial rise in energy. It pumps up the steam that allows users to grind until the completion of an assignment. Along with it is a light pressure that kneads the muscles free of tension or tightness which inhibits movement. Like a well-oiled machine, performing light physical tasks becomes easier.

Blue Cinex has a complex terpene profile. It has overtones of skunk and blue cheese with undertones of sweet berries – particularly, blueberries. Breaking it apart or combusting brings out an herbal and earthier aroma accentuated by a subtle butter.

The strain’s buttery smoke does not induce coughing at all. Instead, upon the first toke, it produces a smooth blueberry flavor that travels all the way to the lungs; coating it in an expansive berry taste. Its sweetness is counteracted by a more herbal and earthy middle while the exhale turns into a sour skunk and blue cheese blend.

Regardless of the strain, red eyes and a cottonmouth are two common side effects of smoking cannabis including Blue Cinex. The barely noticeable offshoots are usually ignored by more seasoned users, but beginners who experience discomfort may want to manage the dry spell. Downing a few glasses before and during the high, as well as staying hydrated after, are a few ways.

Blue Cinex is a powerful stress reliever. Within minutes after the initial onset, it provides an avenue to release the mental and physical fatigue that comes with exhaustion and overwork through its happy-go-lucky high and bodily relaxation. In reducing cortisol levels, it also prevents the exacerbation of certain psychological issues like depression, anxiety, and PTSD. It instills a sense of calm that allows one to think clearly through the emotional turbulence too.

THC also has underlying analgesic properties that become more prominent at the right dosage. As such, Blue Cinex could also work as a natural painkiller and alternative to opioid-based medicine. It works just as effectively and is equally long-lasting, providing patients suffering from chronic pain issues with a reprieve.

Meanwhile, its anti-inflammatory properties further aid in reducing pains and aches by appeasing swelling, redness, sensitivity, and pain. It relieves headaches, backaches, muscle aches, joint pains, stiffness, and sprains among others. Moreover, it comes with less side effects.

The Sea of Green method works best with Blue Cinex. It requires sowing at least four seeds in a single square meter then coaxing the main cola toward the light while also improving distribution in the lower nodes. Toward the flowering period, the growing area begins to look like a ‘sea’ of green as more leaves and buds develop.

There might be some problems with regard air circulation inside the room. As such, it would be good to regularly prune Blue Cinex’s dense foliage. Removing dead branches and leaves also redirects nutrients to healthier parts of the plant. Installing a fan, as well as a proficient ventilation system, will help aerate the batch as well as reduce high levels of humidity.

As it nears full maturity, the buds become denser and create an illusion of being popcorn shaped. Although small, each is packed with a thick coat of crystalline trichomes. Further enhancing its appearance are the blue undertones beneath its olive-green shade with a few rustic orange hairs contrasting it. Although it rarely requires any changes in its diet, adding boosters will really help it produce bigger flowers.

Blue Cinex has a short indoor flowering period of 7 to 9 weeks. Depending on the conditions, the strain can produce as much as 10 to 12 ounces of buds per square meter.

Harvest time usually comes around the last week of September to the second or third week of October. Once ready for harvest, it yields at least 12 ounces of buds per plant.

Have you ever smoked or grown your own Blue Cinex? Please let me know what you think about this marijuana strain in the comments below.