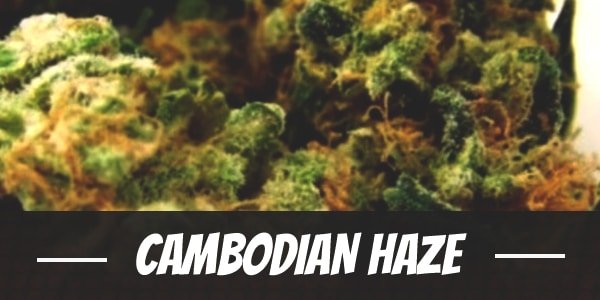 Pure strains are rarer than most think. It is precisely why the 100% Sativa Cambodian Haze is a standout among many products in the industry. Not only that, it is readily accessible and easily available in various dispensaries. However, what truly caught the hearts of many enthusiasts is its euphoric buzz that leaves the mind free to wander.

It was not difficult to create Cambodian Haze. With so many choices in the market, Reeferman Seeds only had to pick a pure Sativa. And, what better choice is there than South East Asia’s Cambodian which boasts a delicious smoke and a vibrant head high? The next step was to pair it with the high-energy Purple Haze which is also of Asian descent.

With THC levels ranging from 12% to 15%, it is safe to say that Cambodian Haze is a versatile strain. It is perfect for beginners slowly edging toward more potent strains and for experienced users looking for a soothing head high. Unlike other high-flying Sativas, it is almost devoid of side effects. It does not induce paranoia and neither does it make users feel anxious despite its strong mental high.

It typically takes two or three puffs of Cambodian Haze for its effects to manifest. Typical of Sativa, it starts with a rush of euphoria that swarms the mind. It replaces negativity with an innate sense of happiness that, if anything, leaves users feeling cheery. Some even smile for the most minute reasons.

One of the best times to use the Sativa is in the morning or early afternoon. This is because the upbeat disposition is a great advantage to have in the workplace and proves useful during brainstorming session. In clearing the mind, it also stimulates a more open-minded thinking. Thus, it is not uncommon for new ideas to emerge as profound thoughts flow and form freely in a surge of creativity.

After about an hour or two, the same uplifting buzz trickles down from the temples. It envelops the body in deep relaxation as it soothes the muscles in waves. Yet, in spite of its intensity, it is not at all sedating. Rather, it puts one at ease while doing tasks to keep tiredness at bay.

Strong overtones of sweet citrus and lemon emanate from Cambodian Haze. It is accentuated by notes freshly picked herbs and spices that, with its hint of wet soil, intensify once the buds are broken apart or combusted.

In the palate, Cambodian Haze bursts with the citric flavors of sweet lemons. Enhancing it is a tinge of wet soil that makes the bud seem freshly picked. On the exhale, the herbal taste of spices washes over the mouth.

The cannabinoids in Cambodian Haze, as well as other strains, always interfere with the production of moisture. Its inhibition is most apparent in areas like the eyes and the mouth. Although the dry spell is inevitable, it usually goes away on its own after a few hours. However, users may down a few glasses of water to stay hydrated throughout the day.

Regardless of its purpose, Cambodian Haze continues to be pharmacologically valuable to various enthusiasts. The combined effects of its cannabinoids, such as THC, CBD, and terpenes, provide a reprieve against a variety of health conditions including depression.

In calming the mind and energizing the senses, Cambodian Haze temporarily appeases symptoms of depression. It also helps manage turbulent emotions while getting rid of overwhelming dread. Both of which are also indicators of chronic stress. The same reinvigorating effects also help mitigate physical and mental fatigue.

A natural painkiller, Cambodian Haze also eases away aches and pains beginning from the temples. Its soothing body high relieves pressure from behind the eyes which can later lead to optic nerve damage or glaucoma if left unattended.

There is no evidence to say that Cambodian Haze will not grow well outdoors. After all, when it is cultivated in the Mediterranean, it flowers rapidly and blooms beautifully. However, it may not perform as exquisitely in the northern hemisphere where it is colder and the day are much shorter. It is precisely for this reason that growers prefer cultivating the herb indoors where mimicking the warm, semi-humid weather is easier done.

Indoor growing also allow aspiring growers to choose from among a variety of mediums including hydroponics, which hastens the flowering phase as well as possibly increase potency. Still, it is soil that brings out the bud’s full flavors.

Because it can get quite tall, Cambodian Haze may have to be trimmed early to keep it from stretching too high. Applying the Screen of Green method, along with other Low-Stress Training techniques, will improve light distribution to lower-end branches and encourage better air circulation.

Adding to its appeal is its availability in feminized form which shortens the growing process. It also assures growers of a full batch of female plants.

Cambodian Haze has a flowering period of 11 to 12 weeks. However, it rewards patient growers with a hefty yield of 12 to 16 ounces of buds per square meter.

Due to climate and location, Cambodian Haze flowers late in the northern hemisphere. Flowers usually show up around the last week of October to the middle of November. Once mature, growers usually harvest at least 16 ounces worth of cured buds per plant.

Have you ever smoked or grown your own Cambodian Haze? Please let me know what you think about this marijuana strain in the comments below.