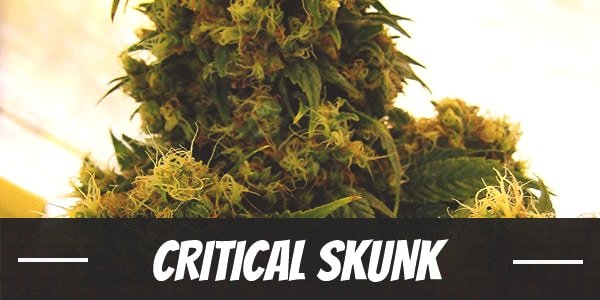 Using Critical Skunk takes one to a gentle high and perhaps in a sexy mood. Additionally, following the stimulating buzz, a soothing relaxation come crashing all around the mind and body.

Remember when Critical Mass strain took the entire European cannabis community by storm? Having qualities of a real marijuana champ, it has gained a worldwide reputation regarding its overall traits. This highly regarded hybrid is a cousin of Critical Skunk.

Developed by one of the most sought-after breeders, Mr. Nice Seeds, Critical Skunk is a cross between two superstars namely Skunk No. 1 and an Afghani Indica. Because of the Afghan and Skunk genetics ingrained in its DNA, the strain can more than hold up its own and make itself worthy of public admiration.

Not long after the first tokes, Critical Skunk sends a subtle head buzz that clears the mind of any mess and trash. It ushers in an uplifting mental and body effect that begins on the forehead and gradually spreads all over. Users often find themselves in mild introspection and may engage in deep conversations. It promotes an overall sense of well-being and feeling completely at ease, and most also tend to be more sociable.

An overwhelming body relaxation later replaces the initial energizing buzz. For some people who use it in moderation, it may be the catalyst to heightened sensuality. As the physical effects take over, Critical Skunk may also cause hunger pangs.

From the same Afghani and Skunk parents, this hybrid shares the same fragrance that Critical Mass is famous for and loved. It has a pungent blend of diesel and skunk that can quickly fill up a room in no time at all. Hence, it can be a little tricky to use if privacy is a concern.

While the smell of fuel and skunk is less pronounced, it remains prominent in its smooth smoke. Critical Skunk has a distinct spicy note and leaves an earthy aftertaste.

Even when used in small amounts, Critical Skunk can still cause some adverse effects. In fact, this is a known trade-off of using marijuana. For instance, all strains can cause dry mouth and dry eyes.

It is also possible that some people may experience mild dizziness. In extreme instances, it may cause a few to feel paranoid. These conditions are often the result of overusing or a case of an individual simply being more susceptible. It may also be due to an existing condition such as one already have anxiety issues.

Medical cannabis patients should find Critical Skunk useful for some health issues, be it moderate or severe.

Due to its analgesic and anti-inflammatory properties, the strain can act as a pain reliever. It does so by providing relief from pains and aches caused by headaches, migraines, and muscle cramps.

The gentle euphoric high it induces followed by body relaxation can also help enhance the mood. Aside from wiping out stress, it also promotes an upbeat outlook that is useful to those with depression.

Once the full body effects manifest, the deep relaxation becomes a prelude to an evening of quality sleep. It does present a dilemma for the users. On the one hand, Critical Skunk does promote hunger. While it is useful for those who do need to have a better appetite, getting up to eat will largely depend on the amount of herb used.

Critical Skunk thrives well indoors or outdoors. It is a sturdy plant with tightly packed buds. With its ability to produce a high yield, it is among the hybrids that commercial growers around the world love.

Because of its compact flower structure, this marijuana plant may be vulnerable to mold growth especially in warmer areas with high humidity. As such, growers will have to make ensure proper humidity levels not only in its environment but also within the tight spots under the plant.

Because of its pungent odor, most people who cultivate it for personal use opt to plant it indoors. In this way, it is easy to take care of its odor by installing a carbon-activated filter on the vent of its habitat.

As mentioned, commercial growers love Critical Skunk. That is mainly due to the potential to harvest 23 to 28 ounces per square meter. Furthermore, it has a quick flowering period of 6 to 8 weeks.

Critical skunk grows best in a warm climate. However, it can tolerate low temperature. It begins its flowering period in the last week of September, and each plant can produce up to 25 ounces.

Have you ever smoked or grown your own Critical Skunk? Please let me know what you think about this marijuana strain in the comments below.