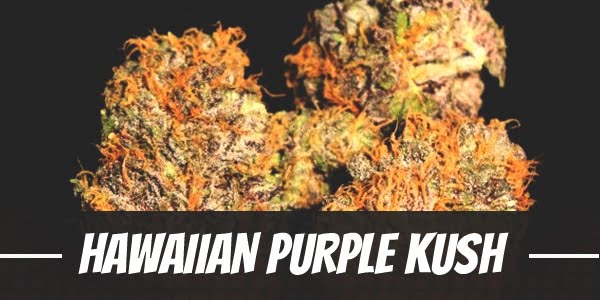 The allure of lazing on the beaches of Hawaii stems from the daily hassles of stress. All that sounds wonderful if only one could pack and leave at any given time. Unfortunately, that is not a luxury people have. As such, one has to be contented with spending time in the tropics with the use of Hawaiian Purple Kush.

Not much is known about the strain itself except that it takes its tropical influence from a Hawaiian Sativa. Appreciated for its fruity fragrance, its most notable trait is its ability to inspire creativity.

From its name, cannabis connoisseurs should quickly pick up on its predecessor Purple Kush. After all, it is one of the best-known cannabis in the Kush lineage. Known for its vivid purple hues, this stain is also recognized for the deep relaxation it induces.

Hawaiian Purple Kush is an 80% Indica strain. Much of it is due to the influence of Purple Kush. However, it still retains enough of its Sativa heritage to take users on a stimulating mental high before settling down in bliss.

Going to Hawaii may or may not be convenient, but it will take time. On the other hand, Hawaiian Purple Kush can bring the same experience to users in an instant. That is because it is a fast-acting strain. As it contains up to 23% THC, its potency is not to be underestimated, let alone questioned. In other words, use more than necessary, and it can become overbearing.

In moderation, though, Hawaiian Purple Kush induces a mild cerebral high. It inspires creative thoughts and promotes an upbeat feeling. It is an excellent strain to share with friends as it takes away inhibitions. In fact, it is not uncommon for some to have giggling bouts. Some people may also talk too much. All that for fun, of course. In essence, this strain can bring life to a gathering.

While basking in mental stimulation and upbeat mood, never forget that Hawaiian Purple Kush is an Indica-dominant strain. Gradually, its effects begin to manifest on the body with a soothing sensation. Once the full effects of the creeper take over, it results in a sedating body high that may cause some people to feel lethargic. In some cases, depending on the amount used or an individual’s tolerance level, it may also induce a couch-lock.

All the references and suggestions to a pleasant vacation in a tropical paradise are not only due to the stimulating effects of Hawaiian Purple Kush. It is also because of its sweet berry fragrance that is reminiscent of being in the tropics.

Smelling the bud is not a bad thing at all. After all, it is that fragrant. Once lit and drawn, only then does its flavors erupt with the sweet taste of berries. With its fruity aftertaste, Hawaiian Purple Kush is the epitome of tropics-inspired marijuana.

Let it not be said that there are unforeseen adverse effects with the use of this strain. Regardless of which variety, using marijuana often causes the throat to feel dry. At the same time, it may also result in having red eyes.

Some people, especially beginners, may also not handle the initial rush of mental high. As such, it may cause dizziness. In extreme cases, a few may also feel slightly anxious.

Test data for the CBD content of Hawaiian Purple Kusk, unfortunately, is not available. By the looks of it, the range should not deviate far off from other hybrids. It means that while the strain does have medical benefits, it is too low to be of significant help to people who have epilepsy.

The psychedelic effects brought on by its psychoactive compounds do offer several benefits. For one, in making people feel upbeat, it takes away stress. By enhancing the mood, it allows people to manage depression better.

To a certain extent, Hawaiian Purple Kush with its potent body effects can offer some comfort too. As marijuana activists swear by, pain relief is one of the reasons why it should be legalized. It is a known fact that it can lessen or, at times, take away chronic pains and aches.

During the comedown, most people are likely to feel the urge to eat. That is not surprising as the same compounds responsible for the high are also excellent in stimulating the appetite. Used in this way, users must ensure using the tiniest amount possible or else fail to get off the couch and get some food.

At this time, sourcing for seeds may be problematic as it does not appear to be available. However, if one were to get ahold, then it likely thrives best in a warm environment. It should have no problem growing inside the house or out in the garden.

Hawaiian Purple Kush as an indoor flowering period of 7 to 9 weeks. Using soil as its medium may be preferable to maximize its flavors. Once ready for harvest, it is likely to produce between 10 to 12 ounces of buds per square meter.

Like typical Indica plants, this strain should begin its flowering phase towards the end of September. Growers can also expect a harvest of at least 12 ounces of buds.

Have you ever smoked or grown your own Hawaiian Purple Kush? Please let me know what you think about this marijuana strain in the comments below.