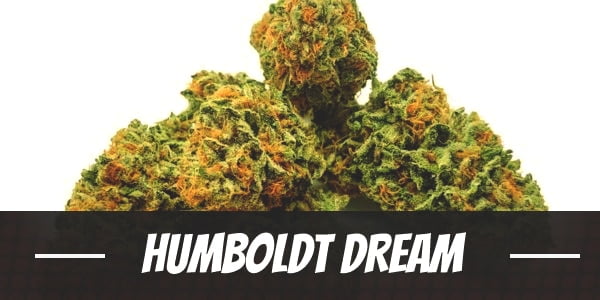 Blue Dream is worthy of being sought after by recreational enthusiasts and medicinal users. It invigorates the mind gently to coax an innate sense of happiness while also releasing tension from the body with its soothing body high. For growers, it is especially attractive for its high-yielding capabilities, good resistance, and easy-to-maintain nature. Backcrossing it three times only proved to improve the desired traits it exhibits.

Purple Panty Dropper, on the other hand, is Humboldt Seed Company’s gem. It is a sweet strain with notable hints of grape and berries, signaling what is to come to enthusiasts who seek it. Its high is euphoric, giving energy to the mind before it creeps in to the rest of the body and settles into the limbs. For others, its effects ignite the fiery fire of earthly passion. Moreover, its bag appeal is over the top.

In Humboldt Dream, these two legends come together. Its Indica-leaning offspring presents many remarkable traits. For one, it has an uplifting head high that helps diminish stress while manage certain mental health conditions like depression and anxiety. Not only that, its physical effects provide relief to patients dealing with chronic pain – either as a result of disorder or disease.

Humboldt Dream is a slow starter. Its onset is a mellow euphoria that clears the mind. It removes distractions, sharpening the senses for thoughts to flow freely. At the same time, it melts away worries, so users feel happier on the inside.

The deep relaxation kneads the body free from tightness and tension which complements the initial head high. It allows users to move around flexibly while performing tasks. Eventually, it tapers into a soothing buzz that plants itself in the limbs.

In low dosages, Humboldt Dream helps enhance productivity. It allows users to work check off lists of things to do without feeling tired or overwhelmed. However, going beyond one’s personal tolerance may lead to either a couchlock or an unencumbered slumber.

Humboldt Dream is a sweet strain with fruity overtones of berries and a subtle hint of fruit. Sour notes of diesel accompany the bud upon combustion.

Humboldt Dream is a sweet strain with fruity overtones of berries and a subtle hint of fruit. Sour notes of diesel accompany the bud upon combustion.

Moisture-inhibiting cannabinoids always make the eyes and mouth dry. Along with it is a subtle dizziness that can sometimes be disorienting. However, it is usually mild and excused by many seasoned users. Beginners may down a few glasses of water throughout the day to stay hydrated.

One of the top reasons that enthusiasts turn to cannabis is to relieve stress. To this end, Humboldt Dream works effectively. It induces an uplifting head high that brings the overwhelming feelings to balance. Simultaneously, it manages the symptoms of depression, anxiety, and similar mental health issues like PTSD. It has a calming euphoria that temporarily displaces the negativity to replace it with positive thoughts and a higher sense of self.

On the physique, it has a notable tranquilizing effect. Its high levels of myrcene significantly improve its ability to knead and soothe the muscles. The terpene has antispasmodic qualities that prevent contractions, reducing aches and pains. Relaxing the stomach, it makes way for food to travel without problem thereby stimulating the appetite.

Users eventually become drowsy from the haziness. The heaviness, which settles on the limbs, weighs down one falls fast asleep on the bed. With its sedating properties, it improves the quality and quantity of slumber.

Humboldt Dream exhibits many Sativa-like qualities. Its height, for instance, can reach up to 15 feet. It leaves are thin and its buds, though dense, taper on each end. However, it also has notable Indica traits such as a sturdy stalk, compact foliage, and purple coloration.

Among its best features is its above-average resistance to common pests and diseases. It makes for an excellent outdoor grow as it can withstand various changes in weather. Not to mention, compared to a grow room, it can extend its roots and stretch toward the sky without limit.

Of course, this is not to say that growers may not cultivate the plant indoors. Rather, it will need to be subjected to some growing methods like pruning which will help circulate air among the lower nodes. In this way, it can dry up faster, preventing root or bud rot and the development of either mold or mildew. One may also supplement this with an efficient ventilation system.

It is a good candidate for the Screen of Green method. The advanced growing technique manages its height, keeps it short, and provides support. It creates multiple budding sites and ensure that light is not only maximized, but also distributed evenly.

TIP: Buy seeds like Humboldt Dream at our seed shop

To bring out its hints of almost-violet hues, growers must expose the plant to a colder night schedule. Usually, one will only need to lower the temperature by 4 to 10 degrees from that of the daytime.

It takes between 7 to 9 weeks for Humboldt Dream to mature. A high yielder, it produces at least 16 ounces of buds per square meter once ready for harvest.

Flowers usually show up between the first week of October to the second or third week. At times, it can be as early as the last few days of September. It produces between at least 16 ounces of buds per plant.

Have you ever smoked or grown your own Humboldt Dream? Please let me know what you think about this marijuana strain in the comments below.