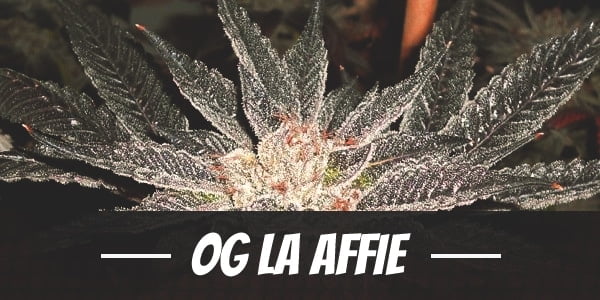 All strains have different traits that make it unique. Unfortunately, many also have their weaknesses. For example, a hybrid may have a pleasing scent, but it comes lacking in effects. Others may deliver an exceptional experience but have underwhelming flavors. That is not to say that a strain that comes close to perfection does not exist. Of course, there are more than a few of them, and one is OG LA Affie.

A descendant of Afghani, its breeder DNA Genetics has not disclosed further details on its lineage. It could be a phenotype or the result of backcrossing. It is also within the realm of possibility that they introduce another genetics, one that contains Sativa. Such supposition is due to the mental high it delivers at its onset while it is supposed to be 100% Indica.
Besides giving a good account of itself, OG LA Affie became even more prominent as one of its descendants, LA Confidential, was a smashing success when it made its appearance.

From its appearance to its fragrance and flavors, and even to its effects, its Afghani heritage is evident. However, it distinguishes itself with its energetic buzz that is typical of Sativa strains.

As mentioned, it appears that OG LA Affie may have some Sativa genetics introduced into her. That is because it delivers pronounced mental high even as it is touted to be a 100% Indica hybrid. Possessing up to 22% THC, it is a potent marijuana strain and one that users should never underestimate.

OG LA Affie is a fast-acting hybrid. It means that soon after the first toke, users can feel its effects. Often, it begins with an uplifting sensation that not only feels pleasant but also clears the mind. As such, its users tend to feel cheerful. It promotes creativity in that ideas and thoughts seem to pop into the head but not in a way where everything is on hyperdrive. Surprisingly, most of its users also feel reinvigorated. At least, that is how it feels like during the early stages.

Typical of Indica, it does take a while before it makes its presence felt. While it certainly adds to the uplifting sensation during the onset, its full effects creep in later. Once it does, it delivers a whole-body relaxation, one that is deep but not to the point of sedation. Hence, it is not likely to lead to a couch-lock if used in moderation.

Even if one were to use a little bit too much, most people are not likely to feel mental haziness. A part of the reason is the way it enhances focus. Of course, it goes without saying that once it becomes overwhelming, then it may cause people to feel lazy.

OG LA Affie has a combination of smells that are seemingly peculiar. Just the same, it is also what makes it stand out. It produces an earthy aroma with hints of coffee. Adding to its exotic scent is the sweet and tangy fragrance that is reminiscent of mango and lime once users break its nug.

The flavors that come from this strain are just like the way it smells except that it is more pronounced. Aside from the bittersweet coffee taste that blends with its earthy and citrus lime, OG LA Affie also has a woody flavor with notes of pepper upon the exhale.

Using marijuana means accepting the adverse effects that come with it such as dryness of mouth and eyes. For the seasoned users who are well aware of these conditions, some may be caught off guard because it is likely to cause a moment of dizziness. Often, it is due to overuse, but in the case of OG LA Affie, it seems to be more pronounced even if using only a small amount.

When it comes to pharmacological use, patients could seek comfort with the use of OG LA Affie. In other words, it is not only for recreational users but medical users as well. While its CBD is not remarkable, its psychoactive properties nonetheless have value to both physical discomforts and mental conditions.

Among its notable use is for pain relief. For instance, it has anti-inflammatory properties that help reduce pain. It also has traits that soothe tired or aching muscles. The strain casts away stress and produces happy endorphins. It swings the mood of users from uneasy to upbeat. Finally, as it puts users into a state of relaxation, it helps people rest and sleep.

Novice and experienced growers alike may find it a challenge to cultivate OG LA Affie. Its breeders suggest that pre-vegging is needed in order to make the most out of this strain. After that, trimming is advised to allow for more light to reach the otherwise tight areas of the plant. Doing so also improves the circulation of air. Besides outdoors, it can also be planted indoors.

Flowering time when growing indoors takes only 7 to 8 weeks. When grown under the right conditions, OG LA Affie may yield up to 16 ounces per square meter.

A dry and warm climate is suggested when growing this strain outdoors. Just be careful as the strong aroma may catch the attention of neighbors nearby. Usually, harvest is ready by the beginning of October. Yield is expected to be up to 12 ounces or more per plant.

Have you ever smoked or grown your own OG LA Affie? Please let me know what you think about this marijuana strain in the comments below.