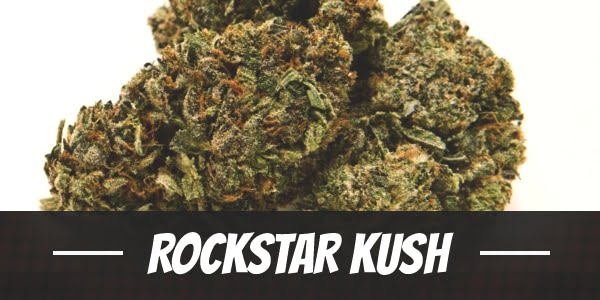 Put three exceptional master genetics together, and the result is a rockstar. Indeed, by crossing three prominent hybrids including a pure landrace Indica, the offspring promises to be a treat. But it is not only for recreational users who crave for a high that is not too overwhelming. It is also as much for medical cannabis users as well.

Master Kush, one of the three strains, was itself an offspring of two pure breeds in the Hindu Kush regions. Among its notable traits is that full-body relaxation it delivers without any numbing effects that can cause a foggy mind.

Sensi Star, on the other hand, is not only a strain considered to be legendary by many in the cannabis circle. Like Master Kush, it delivers the same deep relaxation. Furthermore, it also induces a reinvigorating cerebral high.

Finally, to complete the trio of strains that gave birth to Rockstar Kush, the landrace Afghani Indica. For many decades, breeders have used it to create generation after generation of exceptional hybrids. If there are perfect Indica strains, then they are found in this region.

Three strains considered among the finest in the world. Put them together, and here we are, staring at Rockstar Kush and wondering. What can it do?

Leadership is not about brute force. To that, this master has done a splendid job. Rather than invade the mind and body with unwavering assault, it delivers a soothing sensation. And that is precisely what users can expect when using Rockstar Kush.

At its onset, a warm buzz comes into the body. Soon, tensions and soreness seem to evaporate. This then sets the tone for what is to come. It puts users at ease even as it mildly begins to intensify.

Feeling relaxed, a new sense of happiness sets in with many people ending up euphoric. In the company of others, expect to have a lot of giggling and laughing going on. In a sense, this strain can turn Mr. Grinch into the jolly good fellow.

While it retains some Sativa traits, some of its cerebral effects can also be felt. For instance, users have reported feeling motivated or a little energized. Others also experience mental clarity. Generally, everyone can agree that the full-body relaxation leads to an uplifted spirit and positive outlook.

As users bask in this gentle high, the intensity of the effects is also ever increasing. In most cases, users slow down and finally go on to sleep. There is no sudden onslaught or intense numbing buzz that knocks out people. Instead, it brings people to pure relaxation before drifting off smoothly.

Making this strain even more exceptional is the sweet odor it emits to go with the fresh smell of wood and earth. A minty note is also present, which enhances its aroma further.

Where there is a mild minty aroma that accompanies the strain, it is the menthol that makes it smooth and easy on the throat. Not to mention, it also feels a little cool, too. Some of its aroma carries over, but the fruity flavor of berry is the one that makes it truly a delight.

Although Rockstar Kush does not come with an insane level of THC, it is still formidable. It is only because of its gentleness that some people may underestimate it. In fact, it delivers a potent hit and overuse can lead to some other reactions.

Common with the use of marijuana is having dry mouth and eyes. Such are deemed the standard tradeoff for the benefits it provides.

However, compared to other strains, it does have the tendency to induce dizziness more often. Often, this is when its effects begin to intensify.

Most of the time, people who use Rockstar Kush end up sleeping. For that reason, people who have trouble sleeping could certainly find a good use for this strain.

Mentally, the full-body relaxation it delivers helps clear the mind and wipe out stress. To a certain degree, even people suffering from depression may find it useful. If only for a moment, stop the depressing thoughts and go to rest.

The Indica traits of the strain are also able to help sooth sore muscles. Consequently, it may provide comfort or alleviation from some pains and aches caused by chronic illnesses.

Usually, hunger is something most users feel as the effects of the strain wanes. While some are able to force themselves to get up and eat, others simply sleep and wake up starving. In this way, it is also good for people who need help improving their appetite.

Not a lot is known about cultivating Rockstar Kush. It seems to be limited to British Columbia. However, occasionally, its seeds can be found. Most likely, it grows like typical Indica plants. Its moss green buds tend to be large and covered with glittering trichomes and red hairs.

The expected yield per square meter is 10 to 14 ounces of buds. Rockstar Kush should have a flowering period ranging from 7 to 9 weeks.

Each plant will likely produce more than 14 ounces. Flowering time should fall between September and October.

Have you ever smoked or grown your own Rockstar Kush? Please let me know what you think about this marijuana strain in the comments below.