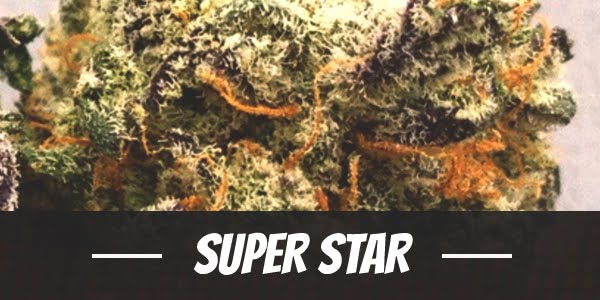 People recognize different strains for their varying traits. In the case of our featured hybrid, the star is its rich sparkling trichomes. It also why it was named Super Star. Bred by Delta 9 Seeds, it is not the same strain as the Superstar from Exotic Genetix.

Although both Super Star and Superstar share some similar traits such as being Indica-dominant, they come from different lineages.

Superstar traces its routes to Supernatural and Starfighter. Super Star, on the other hand, is a double backcross of two male Sensi Star strains.

As alluded to, the reference to a star in its name is influenced by the amount of trichomes that the plant produces. It suggests, too, that it possesses a high THC content. But besides potency, it is also how the strain makes users feel like a star with its inspiring effects.

Super Star, having such an exceptional quality should not come as a surprise. As a descendant of Sensi Star, it inherited the genetics of a strain that has won countless awards in the cannabis scene. As a matter of fact, Sensi Star could make a case for itself as one of the rare strains with the most number of accolades.

Super Star comes with an insane 23% THC. Granted that some batches may have lower levels, it still remains very potent. It also acts fast in delivering gentle but very pronounced euphoric cerebral high. As users begin to feel the tensions from their body being wiped out, they also start to feel uplifted. Feeling cheerful, most people also tend to be more sociable and very talkative.

The gentle Sativa side of Super Star does not overwhelm people by causing mental confusion or psychedelic effects. Instead, it remains stable even as the physical high becomes more pronounced. As soon as it kicks in, the soothing sensation leads to a full-body relaxation.

For most people who use the strain in moderation, they should remain productive if they so choose. Super Star may be Indica-dominant, but the energizing buzz of the Sativa side seems to prevent users from getting couch-locked.

Of course, it goes without saying that if users use too much, then all bets are off. In this case, users are unlikely to move while going into introspection. Still, such effects are not so bad at all as it is conducive to meditation.

Super Star comes with a unique blend of odor. It has a citrusy and lemony blend as well as a sweet and floral note of lilac. Easily, this is one of the most pleasant-smelling strains worldwide.

Sapphire Star has a nice sour lemony aroma with a mild hint of skunk. It also comes with a scent that most people would find as fruity. Read our full review!

While it has a pungent odor, much of the fragrance that carries over to its taste is mild. It is almost a guarantee that anyone who takes a toke of this strain will find it irresistible to take another.

Super Star, similar to other cannabis, brings benefits to both the recreational and medical users. However, it also has a few side effects. Dry mouth and to a lesser extent, dry eyes, are normal with the use of cannabis.

On a few cases, some users have reported feeling a little dizzy. It is most likely a result of the cerebral effects coupled with the user having a low tolerance. Seasoned users are not likely to experience this condition.

The medical benefits provided by this strain is not due to its CBD. In fact, it is so low that it has not effect whatsoever to illnesses that respond to this compound such as epilepsy. Hence, it is the combined mental and physical effects that it induces which then can provide comfort to the people in need.

By inducing euphoric cerebral effects and uplifting the spirit, it is hard for people with depression to continue to dwell in their dark holes. In other words, they are able to focus more on happy thoughts. Needless to say, the same traits also help with stress relief.

Used in small amounts, Super Star has a reinvigorating effect that is the same as drinking espresso. The temporary boost in energy should allow users fight off the effects of fatigue.

Some people may also benefit from mild pain relief. Mostly, it is psychological as its Indica traits do not have the numbing sedating effects similar to other strains.

Super Star can grow tall in the outdoors with several individual branches. The internodes follow the structure of typical Sativa plants. Its buds are dense but small and as mentioned earlier, covered with sparkling resins. Growers can cultivate the plant outdoors or indoors, including in a greenhouse. Beginners who want to get started may also start off with this strain.

Flowering time for Super Star is between the 8th and 9th week if grown inside the house. Each square meter can produce between 10 to 18 ounces of buds.

In open areas, Super Star can grow as tall as they please and will produce 18 ounces of buds or more per plant. Flowering time typically occurs during the first to second week of October.

Have you ever smoked or grown your own Super Star? Please let me know what you think about this marijuana strain in the comments below.