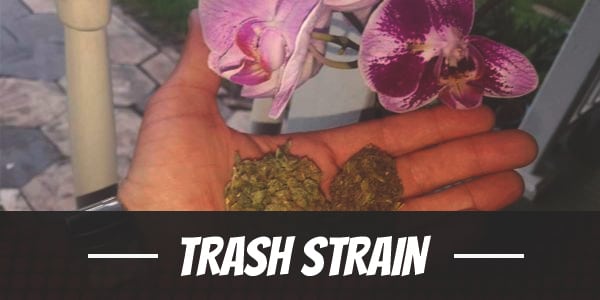 Trash is nothing like what its moniker might suggest. On the contrary, it is a useful strain that helps manage a wide variety of afflictions.

It could be used to enhance the mood, reduce stress, and temporarily dissipate emotional distress.

And, at 17% to 19% THC, its psychoactive compounds also play a hand at managing aches and pains all over the body.

The versatile plant is an excellent introductory strain as well. Being easy to grow, it guides users into a successful cultivation.

It has sturdy stalks, vigorous trichome production, and high yields – all of which contribute to a smooth-sailing grow.

Moreover, at harvest, it produces striking buds that could take one’s breath away.

Its unique terpene blend can be attributed to the floral overtones of Purple Trainwreck and sharp spiciness of Hash Plant.

The former produces colorful buds dripping in trichomes, alluding to its powerful potency which wakes the mind.

Recreationally, Trash has much to offer. It induces an energizing body buzz and clearheaded head high.

It works perfectly as a wake and bake companion when consumed alone, but users may use it with friends for a round of fun and interesting conversations.

Trash is an impressive wake and bake companion. It delivers a rush of energy that instantly clears the mind, improves the mood, and relaxes the body.

During the onset, a change in disposition is noticeable. Enthusiasts are not only upbeat from the euphoric onset, but also intent on finishing tasks.

Casual users benefit the most from the mental clarity and subsequent increase in goal-oriented activities.

It creates a path for thoughts to flow into new ideas or develop into fresh perspectives. The mental clarity also sharpens the senses and enhances focus.

The invigorating buzz enhances persists even as 30 minutes to an hour after the initial onset.

It supplies users with enough energy to work on tasks continuously without showing any signs of tiredness. This makes Trash an excellent strain to consume in place of the usual morning coffee.

Trash is a pungent strain that could easily irritate the nasal senses with its sharp chemical overtones.

Furthermore, it has hints of lemon, mint, and spice that further intensify the sourness.

Breaking apart the buds and combusting it will bring out an herbal sweetness that counteracts the initial profile.

A tantalizing blend of mint and spice prepares the mouth for the upcoming citrus.

Upon swirling the smoke inside the mouth, its tangy lemon flavors bring out its sour overtones.

This is quickly counteracted by a sweet herbal aftertaste on the exhale.

Dry eyes and a cottonmouth are two of the most common reactions to smoking cannabis.

The same holds true for Trash, which contains the same moisture-inhibiting cannabinoids.

Other effects also include a headache and a subtle feeling of paranoia which could be the result of overconsumption.

However, one’s disposition before the high may also affect the overall experience. Use not only in moderation, but also with caution.

Chronic stress is a condition that needs immediate release. Otherwise, it could worsen or lead to the early development of health issues such as heart disease, high blood pressure, chest pains, and psychological distress.

As such, finding ways to reduce high levels of cortisol is necessary.

To this end, Trash could be of immense benefit. It has an uplifting head high that improves the production of happy hormones that reduce stress.

In its place, there is a mood lift that instills a sense of calm that appeases worries.

In doing so, it also manages symptoms of depression, anxiety, and PTSD. Meanwhile, the clarity silence distractions so people with ADHD could focus.

Its invigorating effects also eliminate physical fatigue or exhaustion. It removes tiredness from the limbs as well as tension that tightens the muscles.

In its place, there is a soothing buzz that instills a sense of physical calm.

Its painkilling and anti-inflammatory properties, on the other hand, relieves arthritis, joint pains, and cramps among other aches and pains.

Patients with eating disorders such as anorexia may find comfort in the strain too.

It encourages a hearty appetite that, with prolonged use, could help patients regain lost weight especially when used under the guidance of a health professional.

Purple Trainwreck and Hash Plant are two of the best performing strains.

Thus, it should come no surprise that Trash performs equally well in the growing room. It exhibits many Indica traits such as a short height, a sturdy stalk, and a short flowering period.

Additionally, it has high resistance to many common pests and diseases which makes it a choice plant to cultivate in the grow room.

If any, the most likely problem users will encounter is its dense foliage which can sometimes accumulate moisture in between its crevices.

Leaving it alone will likely lead to humidity related problems such as mold or mildew.

Apart from thinning out the plant, growers could also make provisions by installing a small fan and a proficient ventilation system.

TIP: Looking to buy seeds like Trash? Check out our seed shop

Growers can harvest a huge amount of buds at harvest that typically ranges between 10 to 12 ounces per square meter. Not to mention, it has a short flowering period that lasts around 8 to 10 weeks.

The latest that Trash flowers is around the last week of October. By then, growers can expect at least 12 ounces of buds per square meter.

Have you ever smoked or grown your own Trash? Please let me know what you think about this marijuana strain in the comments below.