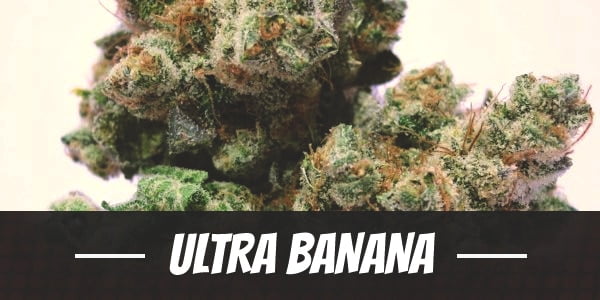 Everybody loves banana, most do, at least. After all, it is cheap as well as nutritious. But we also know of one that offers much more than that. Ultra Banana is a cannabis strain that is relatively new in the market. Even with thousands of other strains available, it certainly has made its mark for two reasons. One is that it induces an incredible body hit while another is where it got its name.

To date, the person or breeder responsible for creating this hybrid has chosen to remain anonymous. With this, we can think of a few conspiracy theory-like assumptions on its origin. Then again, why go through all that trouble. But what we do know is that it comes from two remarkable strains.

First, let’s take a look at MK Ultra. Now, this strain has an interesting story. Apparently, it was named after a not-secret-after-all method of mental manipulation by the CIA. It is most likely because of its hypnotic-like effect. On its own, the strain has done remarkably well after having won and placed second in two High Times Cannabis Cups.

The other parent strain is Banana Kush. Now, we know where the Ultra Banana got its name and its fruity flavor. A notable trait of this hybrid is on its Indica effects that induce relaxation.

In using the two above mentioned strains, the result is one that combines the best of their traits.

Ultra Banana is roughly a 70% Indica-dominant strain. Even so, its effects often begin with a cerebral high. On its onset, the pleasant and uplifting buzz induces happiness. Some people may even feel elated. Furthermore, the tingling sensation all over the body is more than enough to elicit giggles and laughter. It would make for a nice party strain except for what comes next.

As the effects intensify, some users may find themselves in deep introspection. For others, they may have a hard time focusing. Not only do they feel spacey, but they can also be distant. Meanwhile, the Indica traits wash down to the body. As a result, an overwhelming sense of relaxation wipes away any sign of stress.

Remember that the Ultra Banana comes with an insanely high THC content. At up to 23%, it induces a numbing buzz that leads users to a couch-lock. Anyone who overuses it will not even know how they were knocked out.

Used in moderation, the intense sedative effects of Ultra Banana will lead to drowsiness and deep slumber.

Sweet and dank with a note of spiciness, that is how one would describe its overall aroma. And then add to that the influence of its heritage where the scent of the aroma is evident. For some, the use of fragrance may be too strong of a word. In other words, it may take a few people a little while before getting used to its smell.

Mercifully, the same dank odor is less evident in its flavors. Instead, it has a more pronounced note of banana and a fruity blend that makes it actually pleasant to use.

While we may not have listed a few more adverse reactions, it does not mean there are none other than the common reactions associated with the use of cannabis.

Simply, we do not have enough reports from users to have a better understanding what adverse reactions it can cause. As such, dry eyes and mouth remains the most common experience, one may have in overusing.

It is also highly possible that some may experience dizziness or feel paranoid.

After a hard day, getting quality rest is often difficult. Consecutive days and weeks of stress can also lead to degenerative diseases. Here is where the Ultra Banana comes in. Real bananas can provide only a few nutrients, but the strain can give more than that.

First, the intense and numbing sedative effects it has on the body can wipe away stress. Even other mental health disorders may find it hard to withstand the onslaught of whole body relaxation. And that, in turn, leads to its other benefit.

So, the second thing that the strain can do is to provide pain relief. It is the same benefit that cannabis activists had been using in their call for its legalization. People with chronic illnesses have to endure one form or another of suffering. That suffering can be replaced with a buzzing yet relaxing buzz.

Growing Ultra Banana is possible. After all, it is still a plant. However, getting its seeds or even obtaining a clipping may be difficult, if not outright impossible.

But hypothetically, if one were to get ahold of a specimen or its seeds, then we think it will grow in both outdoor and indoor environment.

UltraViolet OG has a pungent scent that, once the container is opened, its pleasant overtones of violets fill the air. Read our full review!

Because we do not have enough information, a quick look at its parent strains tells us that it likely will thrive in a warm climate and should do well regardless of where growers choose to cultivate it.

Our best estimate is that it has a flowering time between 7 to 9 weeks. Each square meter can produce around 10 to 12 ounces of buds.

Grown and tended to properly, the Ultra Banana strain likely starts to flower at the end of September. A conservative estimate of how much it yields places it as at least 12 ounces.

Have you ever smoked or grown your own Ultra Banana? Please let me know what you think about this marijuana strain in the comments below.