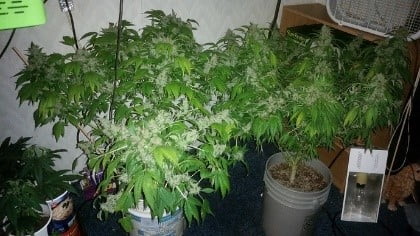 Alaskan Thunderfuck is known to thrive in the great outdoors especially in cooler, northern climates – a testament to its heritage.

When grown outdoors, Alaskan Thunderfuck can produce a massive yield along with beautiful buds which are covered in crystals. It can yield an average of 32 ounces per plant and can be expected to be ripe around October.

Indoors this plant can yield an average of 16 ounces per square meter after a flowering period of 8 to 9 weeks.

These 5 plants sprouted on September 27th so they are already 2 weeks old. They’re really good looking and don’t have any problems so far. These are the best-looking seeds which ever sprouted from this grow tent!

You can see they stretched pretty far early on.

Just some updates on Alaskan Thunderfuck (ATF) #1 and #2. They started out in cups instead of the gallon juice jugs but they will be transplanted into their final homes pretty soon. You can see by the roots it was time for the big move.

The other three plants need a few more weeks before they’re eligible for the transplant.

Plants 1 (left) and 2 (right) look a little shocked and are showing some slow growth compared to plants 3, 4, and 5.

Went ahead and finally transplanted plants 3, 4 and 5. They’re getting close to being 1 months old. They should start flowering here in the next couple of weeks. Hopefully, they won’t go through the same shock as the first two.

And of course, this update wouldn’t be completed without plants 1, and 2.

Did some trimming and cut most of the bigger fan leaves to allow more light to penetrate through the lower branches. Also, all the plants have been super cropped. The ATF strain has taken over the gene pool in these ladies as they are already sticky with trichomes and are releasing such a strong smell.

Pulled these gals out of the closet to get some better photos. Under this light, you can see they have more growth. Nothing else is being done to them other than watering, and feeding. Run off is averaging around pH 6.3 and the temperatures are way better staying between 68 and 73 degrees F with the LEDs.

Unfortunately, plants 2 and 5 are hermies and had to be removed right away.

One of the girls is now in the flower room and under 600W HPS lights. Went ahead and bent the main stalk to slow her upward growth just so she won’t run out of room in the limited grow space.

The others are staying somewhat short and brushy with the lower limbs now taller than the main stalk.

Got an early Christmas present: a brand new Mars Hydro Reflector 96! After being under the new lights, the two other plants started to show more bud sites and they’re looking like they are going to produce some huge buds!

After spending more time under the LEDs, the plants are just getting thicker!

Meanwhile, the girl under the HPS light is looking like a totally different strain altogether.

It’s been weeks since the last update. Not much is going on other than the fact that these ladies are getting thick! Decided to take about 8 to 10 limbs out of the plants to let more light into the remaining branches. Most of them are showing white bumps on stalks and should start showing roots any day now.

The girls are looking good! They’re bound to produce some huge buds!

They actually look better in the photos than in real life. They still have some ways to go.

These ladies are starting to really fill up those loose spots and the buds are getting dense.

It’s update time once more on and they’re just putting on some more real weight. They’re almost unable to hold their buds up so some dowels were used to hold them up.

At this point, the 2 ladies under the Mars lights are struggling to keep themselves watered. Both are drinking quite a bit with one getting just over a gallon with very little runoff. The other is fed with a gallon and a half but still no runoff.

It’s harvest day. These monster plants are going down.

These girls are not yet completely cured but the total weight is 9.75 ounces from the three plants. It should still lose some more weight but not much more at this point.

When growing the Alaskan Thunderfuck strain, you need to remember this is a plant which loves cold climates. They need tons of nutrients to grow big. Nutrient-rich soils which are high in nitrogen and microorganisms will ensure that the ATF will take off much earlier. Silica will also help bring the buds to maturity and ensure they fulfill their potential.

It’s not a strain for beginners but it’s bound to reward your hard work with potent buds!

Do you think you’re good enough to grow the infamous Alaskan Thunderfuck?