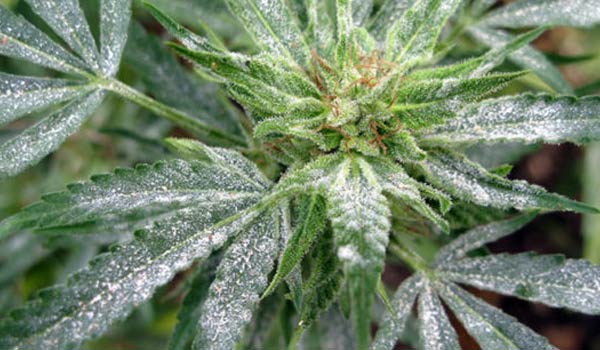 It appears on grow areas indoors and outdoors and is foreshadowed by small bumps on the topsides of leaves. Typical species of fungi that go after hops will also go after your marijuana plants.

What is powdery mildew

Powdery mildew spores can be transported to your plants on the wind, through air ventilation systems, from pets, and any other living thing that moves (including yourself). Until the surrounding environment is ideal, the spores from mildew will stay dormant, biding their time.

This is why powdery mildew on cannabis can be so tricky – you never know when it is lurking and waiting for the perfect time to strike. Powdery mildew is one of those conditions that is better to prevent from the get-go.

The main problem arises with powdery mildew when it is able to grow until it severely slows down photosynthesis and, therefore, ruins your harvest. It, therefore, needs to be taken care of as soon as you are able to identify it.

Powdery mildew is not as uncommon as some other conditions, so it is something that you need to keep an eye out for and to learn the effects of powdery mildew on humans.

If you want to make sure to get rid of powdery mildew, buy something like Bergman’s Plant Protector.

GET YOUR PLANT PROTECTOR

Signs of powdery mildew on cannabis

You will know you have powdery mildew on cannabis when you notice fuzzy, flour-like circular patches on your marijuana plants’ leaves. You might see leaves that look spotted, mottled, and wilting. The powdery mildew infection will quickly spread to surrounding leaves and will “eat” everything in its path.

Powdery mildew is quite recognizable, given its stark white in contrast with the green leaves, and it can be removed if you use proper treatment in a timely manner. The problem with powdery mildew is the spores – often you can’t even see them as they are spreading throughout the air, making them extremely difficult to avoid and combat.

You can prevent mildew by having proper ventilation and the right temperature and humidity. If you still end up with mildew, you have to treat your plants.

Powdery mildew is the most likely to occur when humidity levels are high (above 55%) when there is not much air ventilation happening in your grow area. It also occurs when there is overcrowding of your marijuana plants at the grow site or in the grow room. Leaves touching other leaves are more likely to spread powdery mildew to each other, making it even harder to eradicate when your setup looks like that.

Powdery mildew generally goes for the youngest plants first, spreading across the entire plant and ruining the stems, buds, and leaves of your plant. You will notice a damp sort of smell coming from your buds – this is how you will know which buds have been affected by the powdery mildew as well as when you see a white powdery mold.

Once the fungus has invaded a bud, it cannot be taken away. If the powdery fungus continues its course of action, it will eventually make your marijuana plant turn yellow, which will become brown, and then the plant will simply die.

It is crucial that you never let your plants reach this point. Make sure you are constantly inspecting your plants and always keeping a close eye out for any unexpected changes in your plants.

How to get rid of powdery mildew during flowering

There are some tricks to get rid of this irritating nuisance. But the best way will always be…

When you water your marijuana plants, you should make sure that you are doing it at a time of day when they will receive five hours or more of light after that. This can be artificial or natural light, depending on your growing situation.

You can also try using a UVC light if you are an indoor marijuana grower, which will keep any missed powdery mildew spores from going for your valuable plants. Some growers who have a few years’ experience under their belts might prune some of the fan leaves that don’t receive any direct light due to shading.

This makes it so there are less ideal spots for powdery mildew to land and begin growing. It also has the added benefit of your plant conserving its energy and using it more efficiently for other leaves and growths.

If you don’t want to see any issues arise in your grows, I might have a wonderful solution for you! I have created a balanced nutrient package, specifically engineered for growing marijuana plants! This will ensure that with your next grow you will have the best chance to get an amazing harvest!

It can also be used preventatively before any powdery mildew arises at all. Another option is to do the same thing with one-half teaspoon of baking soda mixed with a quart of water.

Other options for destroying or preventing the powdery mildew include oil sprays such as neem oil, sesame oil, or fish oil. These sprays can also work well for other fungal diseases. A final option at your disposal is a milk spray made from 40% milk and 60% water.

This works so well because the milk has protein in it which reacts to the sun and naturally forms an antiseptic. This antiseptic is what kills the mildew. You can use a milk spray preventatively by spraying it on your plants every ten days, but only when the sun (or artificial light) is shining brightly. This is a common method for all gardeners to use on their plants.

In order to take care of a plant that has been infected with powdery mildew, you should utilize a plastic bag to remove the leaves that have been affected. Seal the bag and then put it into a disposal container that has a tight lid.

The reason for using the plastic bag is to prevent the spores from being sprung into the air and infecting other plants nearby. After removal of the infected areas, treat your plant with fungicide on the stems that held the removed leaves.

‘Plants are infected for weeks before they show the first symptoms.’

Other methods
There are a few alternative methods that you can use to heal your plants, including oil sprays such as cinnamon oil, garlic oil, coriander oil, clove oil, jojoba oil, or cottonseed oil sprays. A commercial product like Mold Control will always to the job. If you want to make sure to get rid of powdery mildew, buy something like Bergman’s Plant Protector.

There are also copper-based applications that you can purchase at any garden center. You can also try one tablespoon of hydrogen peroxide mixed in with water, which destroys the fungus by oxidizing its cell walls. Yet another solution is one teaspoon of limonene that is combined with one quart of water, offering fungicidal properties without actually killing the fungus altogether.

Want to hit the reset button and simply start over if your marijuana plants got infected by powdery mildew and were left untreated? I have created an all-in-one package including nutrients and plant protector which will give your plants the highest chance on survival!

If you are looking for an extremely simple way to get rid of the powdery mildew, you should give the tap water – paper towel method a try. Simply get the paper towels wet and gently wipe your infected leaves with them, therefore removing the mildew that is already there. When doing this, make sure you don’t bump your leaves too much, as that could cause spores to enter the air and spread.

You can also incorporate at least two fans into your grow room to improve the conditions and lessen the chances of powdery mildew development. You should have one fan directing air through the leaves of your plants and the other fan facing out from your grow room. This is so the “used” warm air is dispelled from the room and replaced with fresh air.

Powdery mildew destroyed your grow? Get new seeds from my seed bank

Remember that plants with strong genetics have less chance of getting sick and are less vulnerable to pests and diseases. So make sure to buy cannabis seeds from a trusted seed bank.

What are the powdery mildew health risks on cannabis?

If left untreated, powdery mildew will slow down your plant’s photosynthesis. You should take care of it as soon as you identify it so that it doesn’t ruin your harvest.

How to eliminate powdery mildew spores from buds?

Unfortunately, it’s not possible to remove powdery mildew from buds. Once it invades a bud, it will continue its course of action. Your marijuana plant will eventually turn yellow, then brown before it dies.

What are some examples of how to treat powdery mildew on cannabis?

People use oil sprays such as neem oil, garlic oil, and sesame oil, to mention a few. You can also purchase copper-based applications, sulfur burners, or buy products like Mold Control and Bergman’s Plant Protector.

If you’re looking to make your own spray or powdery mildew treatment, you can mix 40% milk and 60% water. Alternatively, you can create a solution using one tablespoon of hydrogen peroxide mixed in with water.