Marijuana Strains with The Most THC

Home › Growing › Marijuana Strains with The Most THC

THC, or tetrahydrocannabinol, is the most sought-after part of any recreational marijuana. To put it simply, it’s the chemical in weed that gives you the high feeling. Strains of marijuana that have a high THC content are going to give the user a stronger high than strains that are lower in THC.

THC can have an effect on your brain, including the way you think, your memory, your sense of pleasure and time, and even your bodily coordination. It does this by attaching to your body’s cannabinoid receptors, which everyone has. It then activates these receptors to produce the feeling of a high, in various ways (depending on a wide number of factors).

Let’s look at some of the strains of marijuana that have the highest THC levels. 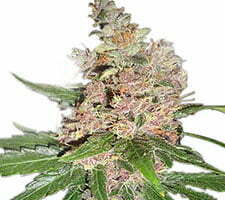 Blue Dream is one of the highest THC strains. It, like the other strains listed in this article, has a THC level of approximately 21%, which is extremely high. Blue Dream is a hybrid strain, meaning a combination of sativa and indica strains (although it is heavier in sativa genes). This strain of marijuana is well known for its body high (which is mostly mild) that also leads to a more creative way of thinking. It is extremely popular and is one of the most sought after strains of weed, perhaps also because of its superior flavor: you can expect it to have a fruit taste and smell, and a euphoric feeling when you’re smoking it.

It is said that Blue Dream is the most popular strain of marijuana to be grown in the United States, and it’s for good reason. Blue Dream marijuana plants are, in addition to being one of the high THC strains, one of the easiest strains to grow altogether. Its yield is always quite good, even if you don’t have an expensive setup and invest lots of money into your growing operation. 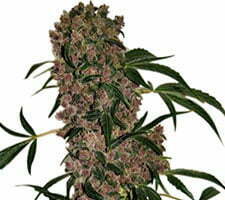 Much like actual Girl Scout cookies, the Girl Scout Cookies marijuana strain is a huge hit. It is one of the highest THC strains, at about 21% THC, and is a popular favorite among smokers of marijuana. Its taste is best characterized as earthy and sweet. The high you feel when you smoke Girl Scout Cookies will likely be relaxed, but not in a depressed way: you’ll have a feeling of euphoria like you’d never believe.

Besides these effects from smoking Girl Scout Cookies, there’s also a medicinal value. It can ease pain as well as feelings of nausea, and stimulate the appetite.

Girl Scout Cookies have actually won a number of awards. Some strains are crossbred with White Widow XTRM to achieve buds that are as dense as possible. Girl Scout Cookies is also a hybrid strain, although its genetics are around 20% sativa, 80% indica. 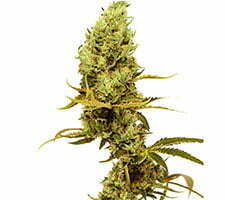 Gold Leaf is an indica based hybrid strain. This marijuana strain has among the highest THC levels at 21%. Its high is both euphoric and relaxing and is known for smoking very smoothly. It serves as an excellent tool for falling asleep easier at night, due in part to the fact that it is often used for people suffering from anxiety, stress, and other related issues. The plant itself looks distinct in that it has huge colas and grows to very tall heights.

This plant is also high in CBD, which makes it an excellent strain for medicinal uses. It has an extremely high yield, on average, and is best grown in a sunny climate similar to what you might find in the Mediterranean. 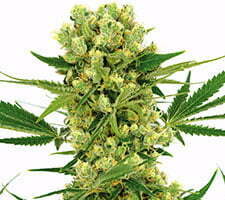 Amnesia Haze is a sativa dominant strain that, in contrast to the Gold Leaf strain, grows only to a medium height. Its flavor is quite strong and is usually a sweet or spicy (or both) type of taste. The high you get from smoking an Amnesia Haze bud is mostly head-focused, mellowing out the user less than a quarter of an hour after smoking. The thing about Amnesia Haze is that, although its effect is strongly social and uplifting, this feeling wears off rather quickly. For certain people, this can be a big asset.

Amnesia Haze plants have dark lime green colored buds, which are known for their crystal coating. The plants look really healthy, with full calyxes, crystals, and hairs that are generally a red-orange color. Plenty of breeders actually prefer to breed strains that are crossbred with Amnesia Haze, or otherwise based off of this strain.

Amnesia Haze works well medically, even though it has high THC. It’s often used for migraines, nausea, and even fear and depression. People with symptoms of anxiety, ADD or ADHD, PMS, or even Fibromyalgia prefer Amnesia Haze to relieve or control their symptoms.

Thanks for reading and don’t forget to download my free grow bible.