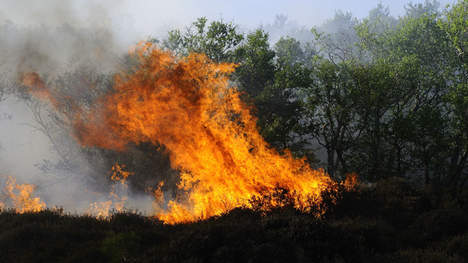 Recent wildfires in Northern California have consumed acres in the past few weeks. Some of the farms set on fire were marijuana farms and I’m guessing you are wondering what happens when a wildfire spreads to a marijuana field.

Thanks to Live Science we now know the answer. The website reached out to Ryan Vandrey, an associate professor in the Department of Psychiatry and Behavioral Sciences at Johns Hopkins University in Baltimore with the ‘burning’ question, would the blaze get anyone in the surrounding area high?

According to a study Vandrey published in the journal Drug and Alcohol. Tetrahydrocannabinol (THC) from secondhand marijuana smoke can build up in a nonsmoker’s body resulting in him or her feeling intoxicated, but this kind of high only occurs when someone is confined to a room without ventilation (hot box) that’s full of cannabis smoke.

“We evaluated the conditions under which you’d need to be to get intoxicated from secondhand smoke exposure, and it needs to be very extreme.” Said Vandrey to Live Science.

Vandrey and his researchers tested 12 participants in a small chamber with an air conditioner, where half of them had to smoke joints. The resulting smoke was filtered out, preventing the nonsmokers in the ‘hot box’ from experiencing a buzz. Basically getting high from secondhand marijuana smoke in a small ventilated chamber is difficult let alone outside, where there is a constant circulation of air. The chance of getting in a hot box situation outside is very slim.

Last but not least. Standing at the edge of a burning marijuana field, for a free buzz is a very bad idea. It could cause damage to your lungs and eyes, so don’t even think about it. Thanks Live Science for busting this myth!

BACK TO TOP
12 Slang Terms All Stoners Should Know
Bloody Marijuana Recipe
Is Legal Weed the New Craft Beer?