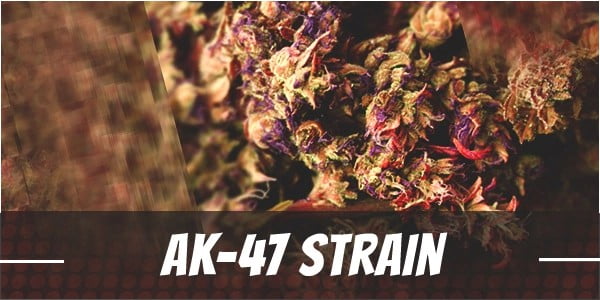 Unlike what its name suggests, AK-47 Strain is a mellow, albeit potent sativa-dominant strain, that can be described as gentle rather than forceful.

A mix of several strains, this one comes heavily decorated with awards, and has earned its reputation for being a global favorite.

It is a bit of a mystery as to why exactly this strain was named after an aggressive Russian assault rifle, as the AK-47 strain is actually more on the mellow side of things.

A very special blend of all the good things out there, AK-47 is a mix of a South American, Thai and Mexican sativa, crossed with an Afghani indica.

Originating in the Netherlands in the early 90’s, this strain has earned some of the highest merits in the cannabis scene.

With 16 awards under its belt, AK-47 ranks amongst the highest ranked strains ever created.

A notoriously happy strain, the AK-47 promises all sorts of good vibrations.

Its first immediate effect noticeable is that of a clear headed relaxation.

It is potent and mood-elevating, causing it to be a favorite among those who come home and need a little smoke to unwind.

Its relaxing and uplifting personality guarantees a good time, whether you choose to stay seated on need to move around and be creative.

The AK-47’s high can last longer than average, and can cause an unavoidable case of the giggles.

A quick and immediate euphoria is often observed, slowly drifting one into an intense cerebral high.

AK-47 can put you in a giddy mood where you find yourself just sitting down smiling from ear to ear without knowing why.

AK-47 has a bit of a sour note to it, that is strongly accompanied by a very noticeable earthy smell.

It is strong smelling in nature, and boasts of a pleasant combination of different whiffs.

A slight tinge of a sweet sugary aroma can be detected in AK-47, which hangs in the air.

Continuing on with what the lingering scent of the AK-47 hints at, its flavor contains sweet floral notes that are mixed with a pungent earthiness to it.

This strain contains a certain herbal spiciness to it, that marks it as one of the more “skunky” strains out there.

Some reports from users also note a certain chemical aftertaste, although this isn’t always observed to be the case.

When taken in moderate doses, AK-47 only causes minor side effects, which is why it is known for being an easy smoke.

It can cause some dizziness and lightheadedness, and in very rare cases it may cause the smoker to feel a touch of paranoia and possibly a headache.

AK-47 is a successful stress-reliever, and can cause momentary euphoria in those suffering from low moods.

Mostly, the most common adverse effect observed in this has been about a feeling of being dehydrated, with a dry mouth and dry eyes making you slightly uncomfortable.

AK-47 is a strain that boasts of very strong medicinal properties. It has therefore been widely used to treat an array of mental disorders.

Anxiety and depression are among the biggest reasons why doctors have been prescribing this medical strain.

Because of its ability to relax without putting you to sleep, AK-47 is also often used to treat muscle spasms and enforce a state of relaxation.

Pain management is easier with strains like AK-47 available to patients, and it is popular for the fact that the high isn’t observed to last too long and feel too heavy, which makes it a great and easy little toke for all sorts of patients.

A lack of appetite may also be treated in patients, as it can cause the legendary munchies.

This is especially fitting for patients who suffer from the after effects of heavy medical treatments such as radiation and chemotherapy.

As this strain can be sensitive to molds and rotting, it is recommended that the AK-47 be grown in a loftier setting, with good ventilation to avoid damaging the plant with extreme humidity.

It prefers a sunny but cool temperature and needs a lot of fresh air to successfully flower.

This sativa strain is preferably grown indoors as it should also be kept away from nosy neighbors due to its strong pungent smell.

The AK-47 is said to take time to flower within 7-9 weeks and is estimated to produce an average of 14 ounces per square meter.

When grown successfully outdoors, the AK-47 can produce an average yield of around 14 ounces per plant.

It is read for a harvest around the month of October, with the end of the month at its most peak harvest time.

What is the AK-47 strain yield?

How much THC does AK-47 strain have?

What are the origins of the AK-47 strain?

AK-47 originated in the Netherlands in the early 90s, and was first bred as a mix of a South American, Thai and Mexican sativa, crossed with an Afghani indica.

Have you ever smoked or grown your own AK-47? Please let me know what you think about this marijuana strain in the comments below.