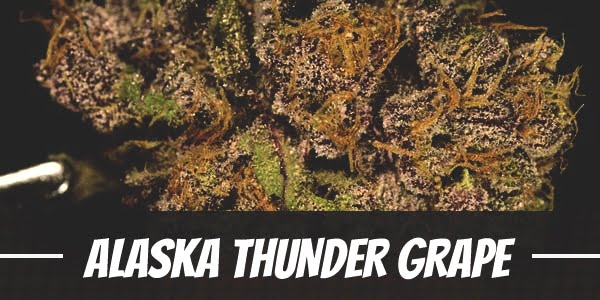 The Matanuska Thunder Fuck is an impressive strain by itself. It sports an enticing tropical terpene profile that excite the senses and a smoke that delivers a stimulating head-to-toe high to match. Its buds, on the other hand, are glistening in trichomes.

If anything, the only problem most enthusiasts have with it is its sensitivity to outdoor conditions as well as long flowering time. It was with regard this problem that Sonoma Country sought to correct. By crossing the Matanuska Thunder Fuck with Grape Ape, the breeders fortified its growth profile with vigorous yields, sturdy stalks and branches, as well as the quick blossoming time of Indicas which it passed on to its offspring Alaska Thunder Grape.

Alaska Thunder Grape is a highly potent strain that does its parents proud. Apart from a desirable growth profile, it has the instantaneous onset and intense high-flying cerebral effects of Matanuska Thunder Fuck and the tranquilizing body buzz of Grape Ape. Although, at up to 22% THC, users may want to stay wary of using the perfectly balanced hybrid.

As a hybrid, Alaska brings together the best qualities of its Indica and Sativa heritage. For one, it delivers an intense cerebral high that begins almost immediately after the first two to three puffs. Meanwhile, at the comedown, it blankets users with a deeply relaxing buzz.

During the initial onset, a rush of euphoria swarms the mind. It clears away distractions and, instead, stimulates the once cobweb-filled mental rut. In doing so, users experience a rise in creativity. Thoughts flow and form freely into ideas or new perspectives. It renews motivation and, along with a heightened sense of focus, tasks on one’s to-do list are checked off throughout the day or as the high persists.

Consequently, users may also enjoy the uplifting head buzz on its own. After all, it also inspires a cheery attitude and upbeat mood as happy memories fill the mind.

Gradually, a tingling sensation trickles down from the temples. It creeps in the muscles before slowly enveloping the body in a soothing tranquility. Although intense, the heavy-hitting Indica effects are kept at bay by the persistent stimulating head high.

Alaska Thunder Grape’s buds are pungent but have the unexpected peppery taste of spices. Breaking it apart, however, reveals its fruity overtones which are reminiscent of grapes sprinkled with dried strawberries. Once combusted, it produces a subtle floral undertone which accentuates the overall fragrance.

Alaska Thunder Grape has a complex flavor profile. Drawn in, it starts off with the fruity taste of grapes and strawberries. However, as the smoke swirls in the mouth, it introduces a peppery undertone that enhances the initial sweetness. On the exhale, it leaves a tangy floral aftertaste similar to hibiscus.

Like other strains, Alaska Thunder Grape has cannabinoids that interfere with the body’s natural ability to produce moisture. Hence, most users end up with a cottonmouth and dry eyes that can last up to a few hours regardless of the amount of buds one consumes. Staying hydrated, as well as avoiding drinks like alcohol and coffee, throughout the day will help ease the ache.

Although rare, users may also green out while using Alaska Thunder Grape. Apart from overconsumption and low tolerance to THC, it can also be the result of being susceptible to the condition. In such cases, it is better to stay away until fully calm or start at low doses.

Presumably, Alaska Thunder Grape was created for recreational purposes. Still, the strain contains significant therapeutic effects to be of value to patients. Its cannabinoids, particularly its THC and CBD, appease a wide variety of afflictions.

Its happy high, for example, calms the overwhelming dread that often comes with stress. In uplifting the mood and stabilizing turbulent emotions, it becomes a source of comfort to patients suffering from anxiety, depression, and PTSD.

The same psychoactive compound responsible for the uplifting head high also has analgesic properties that ease a myriad of aches and pains. Among its best users, in fact, is relieving pressure from behind the eyes. If left unattended or unmanaged, intraocular pressure can develop into glaucoma which is a more serious condition by far.

Alaska Thunder Grape proudly displays its perfect mix of Indica and Sativa genes. It is relatively tall but its height is easily manageable. Meanwhile, its stalks and branches are sturdy enough to withstand a myriad of untoward environmental conditions such as strong winds and fluctuations in weather. Still, there are many who prefer growing the strain indoors.

This is not to say the plant will not do well when cultivated in a garden or farm. In fact, it has huge turnouts of delicious buds that are cultivated in organic soil. Moreover, the sun’s warmth and nutrient-rich light also help it grow big. However, the possibility of the plant being ravaged by pests or killed by frost is high in spite of a temporary enclosing.

A controllable environment gives growers a chance to adjust important factors like lighting, humidity, and temperature to better suit the plant’s needs based on its current phase. It may need to be trimmed though. Apart from keeping it short, pruning will also enhancing light and air circulation in the lower nodes while improving nutrient distribution.

Soil will enhance Alaska Thunder Grape’s terpene profile. However, soilless mediums like coco coir or hydroponics produce cleaner buds at a faster rate. Not to mention, the likelihood of producing more nugs is also higher.

Alaska Thunder Grape has an indoor flowering period of 8 to 10 weeks. Once ready for harvest, it yields between 12 to 14 ounces of buds per square meter. Under the seasoned care of an expert, it is possible to shorten the blooming phase by a week while increasing yields using the Sea or Screen of Green method.

Garden grown Alaska Thunder Grape blooms from the second to fourth week of October, depending on the conditions. Growers can expect at least 14 ounces of buds per plant.

Have you ever smoked or grown your own Alaska Thunder Grape? Please let me know what you think about this marijuana strain in the comments below.