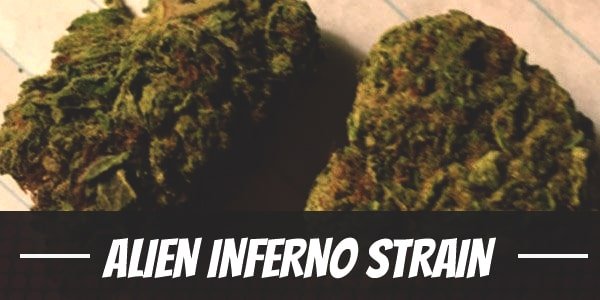 Hearing Alien Inferno’s name is enough to send one running away. After all, a moniker that combines the extraterrestrial with a fire that runs out of control is definitely unheard of. Not only that, it is an Indica-leaning strain with a devastating 20% THC that can lock users to the couch.

However, the only spark Alien Inferno lights up is that of creativity which leaves the mind content after accomplishing tasks. Its body high, too, is quite tame in spite of its intensity. Rather than gluing users within the fiery depths of hell, it puts out painful flames all over the body caused by harsh conditions.

To create it, breeders took Alien OG as a genetic base due to its potent THC levels that earned it a spot among the top Indica-dominant hybrids in the market. It was later paired with White Fire #6 and crossed again with Diablo, which lent its offspring the striking red hairs in its buds that look like fire.

Of course, nothing short is expected from LivWell whose company name hints at the various health benefits the Colorado-born hybrid has to offer.

Despite being more of an Indica, Alien Inferno has pronounced cerebral effects. Minutes after the first few puffs, a rush of euphoria uplifts spirits. Almost immediately, genuine smiles are brighter as happy memories are invited to parade into the mind.

Along with the mental clarity are thoughts that flow freely, igniting a creative spark. Often, users come up with ideas that are profoundly innovative. As such, it is a great tool for brainstorming especially during a casual meet-up with friends or co-workers. Moreover, the boost in confidence allows one to voice out opinions or strike a conversation during social events.

After about an hour or two, a light pressure signals the beginning of the strain’s mental effects. It ebbs down from the temples in waves and relaxes each muscle with its soothing buzz. Calmly intensifying as time passes by, it finally envelops users in a deeply tranquilizing high that removes tiredness.

Alien Inferno rarely devastates users with a heavy-hitting body high that potentially locks one to the couch. On the contrary, it is uplifting and mentally stimulating. For this reason, it can be used during the mornings or afternoons for a creative boost during slow days.

Alien Inferno has a pungent diesel smell that immediately catches the attention of users. Broken apart or combusted, it releases a dank earthy fragrance with a spicy undertone that fills the room.

Drawn in, Alien Inferno’s smoke fills the palate with strong notes of lemon and sour diesel. Complementing it are spicy undertones and subtle notes of earth are evident but become more noticeable on the exhale.

Alien Inferno has a remarkably low number of side effects. In fact, most consumers only tend to experience a case of dry eyes and mouth which are present regardless of the strain. Nevertheless, a select few might experience an increase in anxiety levels. While the former is more difficult to dodge, the latter can be totally avoided through pacing and moderation rather than smoking exorbitant amounts.

Alien Inferno, in spite of its name, is actually a haven for patients seeking mental or physical relief from various ailments. It sets bad moods aside with the anti-depressant qualities its THC contains. In a similar manner, the bud also releases stress through its uplifting cerebral high that brings back the spark in one’s eyes.

The same psychoactive compound also stimulates the appetite while inducing its happy high. As such, it is not uncommon to see users of the bud smiling from ear-to-ear while waiting for food on the table. For patients diagnosed with either anorexia or cachexia, the hearty cravings are a welcome visitor.

On the physical, Alien Inferno delivers reinvigorating effects that get rid of fatigue and any pains associated with it.

Alien Inferno has the typical structure of an Indica-leaning strain. It is short, sturdy, and highly resilient against strong gusts of wind. However, some varieties may exhibit a lankier stalk that is easily swayed by various environmental factors.

Though its height rarely necessitates an early topping, it will need to be trimmed. Its thick leaves and compactness will harbor moisture in between its crevices that eventually develop into mildew or mold. As such, it will suit the cooler temperatures of the north in spite of its preference for warm weather.

Applying the Sea of Green method, along with other Low and High-Stress Training techniques, will encourage bud growth as well as improve trichome production. During the flowering phase, it produces dense buds that are covered in red hairs.

TIP: Looking to buy seeds like Alien Inferno? Check out our seed bank

Alien Inferno’s strong Indica genetics have turned it into a fast-flowerer. Within 7 to 9 weeks, it produces between 10 to 12 ounces of buds per square meter.

A resilient plant, Alien Inferno flowers from late September to the middle of October regardless of the weather conditions it faces. Once ready for harvest, it yields a minimum of 12 ounces of buds per plant.

Have you ever smoked or grown your own Alien Inferno? Please let me know what you think about this marijuana strain in the comments below.