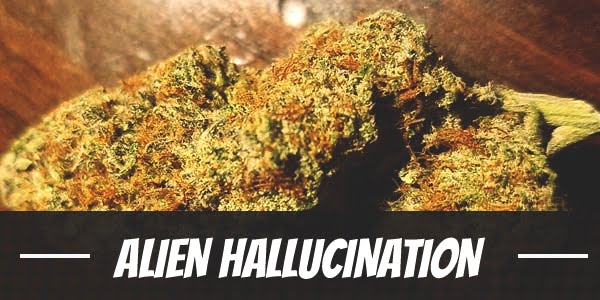 Despite what its name may suggest, Alien Hallucination does not overwhelm users with a hallucinatory, trippy experience. Unless, of course, one overuses the strain and its THC levels of 20% to 24%. In all likelihood, it will lock one to the couch and heighten sensations. Otherwise, it induces a pleasant uplifting high in moderation.

Alien Hallucination does indeed bend the minds of its consumers. Although, not in the way one would assume based from its name. Rather, it elevates the mood and positively affects behavior. Moreover, it induces a relaxing buzz that tranquilizes pain along with an enticing array of citrus and earth.

The otherworldly strain has the out-of-this-world genetics of Tahoe Alien, an Indica-dominant that carries the body into space. Meanwhile, its potentially trippy effects are from LSD which have provided many enthusiasts with a mind-opening experience.

Apart from recreation, Alien Hallucination improves the quality of lives of patients that suffer from a variety of afflictions.

From the get go, it elevates energy levels with a rush of euphoria that swarms the mind and the body. It provides a mental boost that last for hours. The uplifting buzz inspires a sense of happiness from within. As such, it is not uncommon for users to smile more or laugh in between conversations.

After about an hour or two, the Indica effects of the well-balanced hybrid manifest. It is a light pressure in the back of the head that, as it intensifies with each toke, it gradually spreads throughout the body in waves of relaxation. It kneads the muscles, unties knots, and envelops the body in tranquility.

The strong smell of sweet and tangy citrus emanates from Alien Hallucination’s buds. A herbal essence soon follows that. On the exhale, a dank earthy scent gets given off.

When first tasted, the flavor of sweet lemons hit the palate. Adding balance are herbal overtones that come with hints of earthiness. On the exhale, a subtle citrusy aftertaste rounds things up.

Users mostly experience dryness in the eyes and the mouth due to cannabinoids interfering with the body’s production of moisture. It is mild and barely a cause for concern as it can be easily mitigated by staying hydrated throughout the day.

A more concerning issue is greening out, which is a condition that is characterized by dizziness, anxiety, and paranoia. Because such effects are caused by high doses of Alien Hallucination, the best way to avoid them is through pacing, moderation, and caution.

Presumably, Alien Hallucination was developed for recreational purposes. Still, this does not diminish the soothing effects of its head to body high. Through the combined effects of its cannabinoids, it provides a reprieve to patients against various health issues.

Through its happy high, Alien Hallucination reduces stress and temporarily appeases its symptoms. Among which are random aches in the body from exhaustion or fatigue along with the feeling of overwhelming dread and self-depreciating thoughts. In a similar manner, it can be used as an anti-depressant to help manage symptoms of mental afflictions.

A perfectly split hybrid, Alien Hallucination brings out the best qualities of its Indica and Sativa heritage. For example, it has as manageable height that rarely needs topping. Still, growers with limited spaces can keep its height short using Screen of Green nets.

Additionally, the plant has sturdy stalks and branches that do not sway when fazed with strong gusts of wind or from the weight of its heavy nugs. One thing growers must do though is to prune the plant to improve better light and air circulation in the lower nodes. Cutting away dead parts will also aid in nutrient distribution.

With that said, growers can cultivate the plant in various environments. Outdoors, it will require extra protection against pests. Meanwhile, controlled environments will need to add a powerful ventilation system to make sure the plant is fully dried. Otherwise, the moisture that seeps into its crevices will develop into mold or mildew.

When flowering, Alien Hallucination yields dense green buds that are covered with trichomes. A decent coating of resin oozes from its calyxes too.

At the moment, Alien Genetics only sells Alien Hallucination in regular form. As such, growers will have to apply pre-germination methods like soaking to encourage more females. Applying Low-Stress Training, on the hand, will keep it from turning into hermaphrodites.

Alien Hallucination blossoms within 8 to 10 weeks after initiating the flowering stage. Once ready for harvest, it yields between 12 to 14 ounces of buds per square meter.

Growers can expect flowers to show up by middle to late October when cultivating Alien Hallucination outdoors in either gardens and farms. It is common to harvest at least 14 ounces of buds per plant once it fully matures.

Have you ever smoked or grown your own Alien Hallucination? Please let me know what you think about this marijuana strain in the comments below.