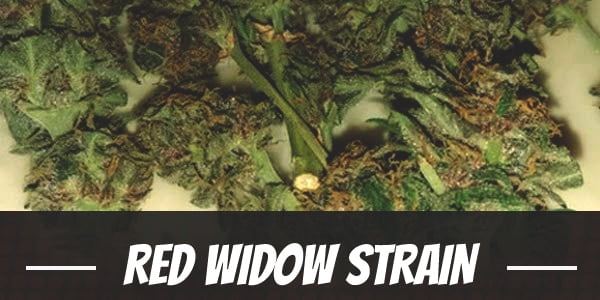 The White Widow is one of the most well-known strains all over the world. It gained fame for its heavy trichome production that coats buds in a thick white cast and impressive yields. Not to mention, it delivers stimulating effects that invigorate users from head to toe.

Majority of its offspring usually sport the same snowy coat of trichomes. However, Red Widow does not. It has a redder tone to its sticky resin as a result of its golden and rustic hairs. It gained this feature from Red Dragon, an exotic Sativa-leaning strain with extremely potent effects that can green users out. However, in moderation, its high is a pleasant sociability.

Red Widow embodies the qualities of its parent strains. It boasts THC levels of 14% to 18% and is sticky with trichomes. It raises energy levels, so users feel motivated to complete tasks during a session. However, a few extra puffs  results in a tranquilizing buzz that shoos stress and fatigue away from the body.

Red Widow is a versatile strain that users of various levels can enjoy. Beginners, for instance, can keep the dosage low for a pleasant, non-overwhelming high. Meanwhile, thrill seekers may cater to their needs by taking a few more puffs without going beyond personal THC tolerance levels.

During the onset, it delivers a quick-acting head high that instantly uplifts the mood. It removes chaotic thoughts to replace it with cheerful memories that bring a smile to one’s face. Feeling upbeat, users start giggling over the most minute reasons. Because of this, it makes for a great recreational smoke to be shared with friends.

A light pressure tingles the temples and develops into a soothing buzz that ebbs down to the toes. It releases tension in the muscles and relaxes the body. Without a doubt, users will want to lounge on the couch or roll around the bed as the soothing waves continues to wash away stress.

It may also be used at night. Red Widow turns into a natural bedtime companion when users increase dosage appropriately. The tingling sensation turns into a heaviness that plants itself in the limbs and lulls one to bed. In all likelihood, enthusiasts will be fast asleep and off to dreamland to meet Mr. Sandman.

Red Widow has a sweet fruity aroma enhanced by the aroma of damp soil. Broken apart, its buds produce a skunky overtone complemented by a buttery smoke after combustion.

In the palate, Red Widow has an earthier flavor. Complimenting it are undertones of ripe tropical fruit. It is sweet but tangy with its overtones of skunk coating the tongue as users savor the smoke. Its smooth quality leaves a buttery aftertaste on the exhale.

A cottonmouth and dry eyes are two reactions to Red Widow’s moisture-inhibiting cannabinoids. It is normal, barely noticeable, and easily mitigated through hydration. A more uncommon side effect is a greening out, which is characterized by a subtle feeling of paranoia. Usually, it is the result of overconsumption, but it may also be influenced by one’s disposition before the session. In such cases, it is best to start with low dosages or completely avoid the strain.

Relieving stress is essential in enhancing the quality of life. After all, high levels of stress lead to the early onset and exacerbation of various health issues such as depression, anxiety, and arrythmia. Through its uplifting high, Red Widow reduces stress. It has a soothing euphoria that calms overwhelming dread induced by worries.

Similarly, Red Widow’s ability to replace negativity with an innate sense of happiness turns it into an effective anti-depressant. It encourages an upbeat disposition and raises confidence. Because of this, long-sufferers of mental health issues such as PTSD can find comfort in the strain.

The stimulating buzz also revives one’s appetite. It encourages patients with eating disorders such as anorexia and cachexia to eat heartily, without regurgitating the food due to painful contractions. Its ability to soothe the stomach also extends to the other organs of the body. Its analgesic qualities appease various type of aches and pains. In doing so, it also reduces the swelling and redness of inflammation.

Resting is one of the most important aspects of the healing process. It stabilizes hormones and invigorates users for the next day. With its sedating properties, it lulls users to a deep, unencumbered slumber while enhancing the quality and quantity of sleep.

Red Widow, as a hybrid, exhibits both Sativa and Indica qualities. It is relatively tall with branches that are thick enough to withstand the weight of its heavy buds. It also has notable resistance against various growing conditions such as high levels of humidity and the onslaught of strong winds. It makes for an impressive outdoor growing strain, but there are many who prefer cultivating it outdoors.

Growers can take advantage of its relatively compact structure by planting at least four seeds in a single square meter in a Sea of Green setup. Pruning is necessary for this setup as the dense foliage will stunt air circulation and light distribution in the lower nodes. For the Screen of Green, a screen must be placed above the current canopy. As the plant grows, one must weave the branches into the screen. It keeps Red Widow short while ensuring that each budding site absorbs adequate amounts of light for growth. Regardless of one’s choice, both growing techniques will increase yields.

Red Widow has an indoor flowering period of 8 to 10 weeks. It yields at least 12 to 14 ounces of buds per square meter once ready for harvest.

In the northern hemisphere, Red Widow blossoms from the second to the fourth week of October. Growers can expect at least 12 ounces of buds per plant at full maturity.

What is the Red Widow strain yield?

12 to 14 ounces per square meter indoors, 14+ ounces per plant outdoors

How much THC does Red Widow have?

What are the origins of the Red Widow strain?

Have you ever smoked or grown your own Red Widow? Please let me know what you think about this marijuana strain in the comments below.