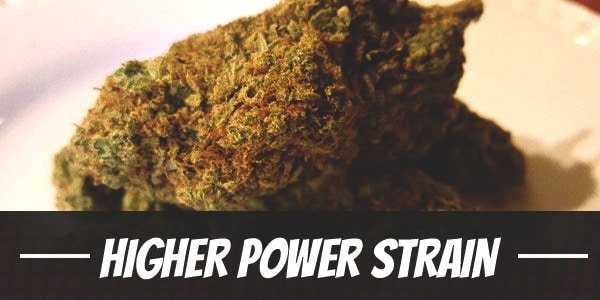 A Higher Power is real, and it exists in the buds of a potent Sativa-leaning plant that delivers a powerful high. Its head high is a surge of energy that starts at the temples, resulting in explosive creativity and enhanced focus.

At the comedown, it turns into a gentle buzz that fuels users throughout the day. In higher doses, however, Higher Power’s effects are the opposite. It settles in the limbs, weighing the lids and the rest of the body down. Feeling deeply relaxed, user will eventually fall into a deep, unencumbered slumber.

Wild Oregon Weed used African Queen as a genetic base for its invigorating and lively effects. From it, Higher Power also gained its potent levels of THC. It was later paired with the Indica-leaning Geezus which laid the foundation for its potentially heavy-hitting comedown.

Higher Power is a potent strain. Its THC levels range from a manageable 17% to a powerful 24%. First-time users may find the strain too intense, especially after accidentally consuming beyond personal tolerance levels. This is not to say beginners should totally avoid the strain, rather one should have a seasoned friend oversee the session.

Used in moderation, its onset is an uplifting rush that enhances the mood within minutes after the first two to three puffs. It leaves users feeling happy as it clears the mind of chaos. Replacing it are free-flowing thoughts that inspire groundbreaking ideas. The mental clarity also sharpens the senses. It improves focus by piquing interest on the current subject matter in one’s hand.

A light pressure tingles in the temples before trickling down to the toes. It eases the muscles and lightens any heaviness that weighs the body down. Replacing it is a surge of energy that turns users into well-oiled machines. With renewed motivation, one passes the day completing various tasks.

Higher Power is best used in the morning. It has a wake-and-bake quality that powers users for either a fun or productive day. It also makes for an impressive pick-me-up during an afternoon siesta.

Higher Power smells much like Froot Loops. It has overtones of candied fruits such as grapes and grapefruits. Enhancing it is a floral undertone with notes of lemon and berries. Upon combustion, it produces a tropical smoke.

A bite out of a bowl of Froot Loops is the best way to describe Higher Power’s flavors. It tantalizes the palate with its sweet and tangy taste of candied grapes, lemon, and berries. On the exhale, it leaves a floral grapefruit aftertaste.

Red eyes and a cottonmouth are two of the most common reactions to Higher Power’s moisture-inhibiting cannabinoids. Although long-lasting, the discomfort is manageable by downing a few glasses of water. Paranoia is another side effect. Usually, it is the result of overconsumption and smoking in spite of an uneasy disposition.

Higher Power is a powerful strain that induces both recreational and medicinal effects. Its cannabinoids, such as THC, CBD, and terpenes, deliver a restorative head to toe high. It provides patients with a reprieve against a variety of health issues.

Its euphoric buzz at the onset, for instance, has a positive effect on one’s disposition. It delivers a calming euphoria that, apart from uplifting the mood, also stabilizes turbulent emotions. Because of this, it is an impressive stress reliever and anti-depressant that manages symptoms of depression, anxiety, as well as PTSD.

One of the best times to use Higher Power is right before a meal. Its stimulating buzz encourages a hearty appetite while soothing the stomach to allow food to travel smoother. Because of this, it is a source of comfort for patients with eating disorders such as anorexia or cachexia.

The deep relaxation, as well as full stomach, frees users from tension and fatigue. It lulls users to bed with its sedating properties. Simultaneously, it enhances the quality and quantity of sleep so one wakes up the next day feeling invigorated.

Higher Power is a lanky strain. Its stalks are tall while its branches are thin. It sways with the breeze but will break when a stronger wind blows at it. It is also weak against heavy rains and the snow which can either stunt its growth or kill it overnight.

Its propensity for Mediterranean climates means that it will have difficulty growing in the northern hemisphere where the days are shorter. It is also colder. The lack of sunlight and warmth results in a prolonged flowering time.

Aspiring growers may choose to cultivate Higher Power indoors instead.  A controllable environment makes it easy to mimic the long and warm days by adjusting temperature, lighting, and ventilation. Installing high-intensity lights of at least 400 watts, as well as keeping the room warm and semi-humid, will bring out the plant’s full potential.

Its structure best fits the Screen of Green setup, wherein a screen is installed a few inches above the current canopy to manage its height, provide support, and increase yields. Growers will need to weave the branches into the net as it continues to grow. This ensures that light is distributed evenly among the budding sites especially in the lower nodes.

TIP: Looking to buy seeds like Higher Power? Check out my seed shop

Higher Power has an indoor flowering period of 10 to 12 weeks. Growers can expect at least 16 ounces of buds per square meter once the buds turn fully mature.

Flowers usually bloom around the last week of October to the second or third week of November. Higher Power yields at least 16 ounces of bud per plant at harvest.

Have you ever smoked or grown your own Higher Power? Please let me know what you think about this marijuana strain in the comments below.