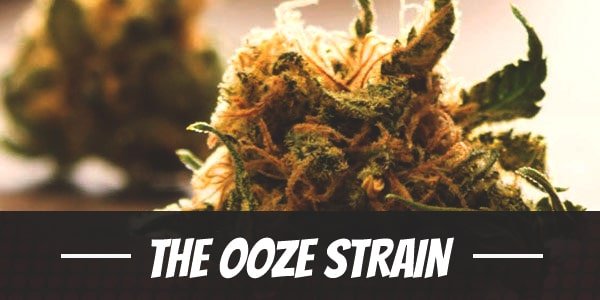 The Ooze is a potent Indica dominant strain that stays true to its moniker. Into the mind is a cloud of euphoria is an uplifting buzz that brings smiles to the face as it improves moods. Gradually, it oozes to the rest of the body like a thick liquid overflowing with relaxing effects. It tranquilizes disturbances that distract users from its effects before tapering into a calm sedation.

White Fire Alien OG created the base for The Ooze’s genetics. From it, the strain gained its Indica genetics and full-bodied, stress-crushing high. Meanwhile, its uplifting head effects is from Green Crack. The Sativa-leaning strain influenced its offspring’s sharp mental buzz.

So long as The Ooze is used in moderation, its effects are fairly pleasant. It makes for a great recreational treat to be shared among friends or a temporary therapeutic aid against health issues that plague patients.

Information About The Ooze Strain

The Ooze is a potent but slow-starting strain. It has THC levels that range from 15% to 23%. However, its onset does not start until 15 minutes after the first two to three puffs. But, once it settles, it quickly spreads from head to toe.

Its initial effects are marked by a slow buzz of euphoria that leaves users feeling happy. It sharpens the senses as it clears the mind. Replacing the chaos are cheerful memories that bring a smile to one’s face. Because of this, it is best shared with friends as a recreational bud.

A light pressure creeps in an hour or two after the onset. It eases the temples, smoothing creases in the forehead, then makes its way down to the rest of the body. Surging as a soothing sensation through the muscles, it releases tensions that stiffen movement.

For some users, the freedom from mental and physical inhibition is liberating. It awakes the carnal senses, priming one for a passion-filled night with a loved one. One thing to remember though. Consuming beyond personal tolerance levels can ruin the fun.

With that said, The Ooze is best used mid-morning or early afternoon. Users stay focused due to the mental clarity while its clarifying body buzz allows for better movement. So long, of course, that it is used with moderation.

The Ooze has a fruity aroma with overtones of apple. Enhancing it is an herbal undertone with spicy notes that intensifies after crushing its buds. Still, it produces an overpowering sweetness after combusting the buds.

When smoked, The Ooze coats the palate with the fruity taste of apples. It is sweet with a hint of tang that is later overpowered by herbal undertones. On the exhale, it leaves a spicy aftertaste.

Two of the most common reactions to smoking The Ooze are dry eyes and a cottonmouth which are triggered by the strain’s moisture-inhibiting cannabinoids. It is usually ignored due to its mildness. Moreover, users can reduce the discomfort by downing a few glasses of water. A side effect that cannot be easily addressed is greening out. It is characterized by temporary but long-lasting dizziness and a headache that disorients the mind. However, users can avoid it by practicing moderation.

Relieving stress should be among users’ top priorities. If left to accumulate, it can lead the exacerbation or early development of various health problems such as depression, anxiety, heart hypothyroidism, and hyperthyroidism. While it may not be a long-term solution, The Ooze provides temporarily relief from stress by relieving certain symptoms with its head to toe high.

Its uplifting onset, for instance, enhances the mood. It leaves users basking in calm euphoria, oozing away the negative emotions and worries. Simultaneously, it manages symptoms of mental health issues like depression, anxiety, and PTSD.

Its relaxing properties start at the temples, slowly reducing the pressure from behind the eyes. If left unattended, it can cause extreme headaches and migraines. Replacing it is a soothing buzz that prevents twitching and contraction in the muscles to relieve intraocular pressure. It kneads the muscles as it makes its way down to the toes. In this way, it relieves fatigue effectively.

Its ability to tranquilize aches and pains works well in the gastrointestinal tract too. It prevents cramps that regurgitate the stomach’s insides while allowing food to travel faster. Its slightly stimulating buzz wakes the appetite and encourages patients to eat heartily. Because of this, it makes for an impressive companion for people with eating disorders like anorexia. At the same time, it also works as an anti-emetic that provides comfort to long-sufferers of chemotherapy’s nauseating effects.

TIP: Buy seeds like The Ooze at our seed bank

The Ooze has the structure of an Indica strain. It is short, sturdy, with thick branches and an even thicker stalk. It has good resistance against cooler temperatures and strong winds. Moreover, it can be cultivated in various growing areas. First-time growers or curious green thumbs will find that it is a good introductory grow.

It works best in the Sea of Green setup which takes advantage of its compact structure. Growers may cultivate at least four plants in a single square meter to enhance yields and shorten the flowering period. One will need to trim it often to thin it out, however. Its dense foliage can harbor moisture in between its crevices leading to humidity-related problems like mold, mildew, and bud or root rot. Installing a proficient ventilation system will circulate air better especially in the lower nodes.

Growers need not wait long for The Ooze to fully flower. After 7 to 8 weeks of blossoming, it produces between 10 to 12 ounces of buds per square meter.

In the northern hemisphere, The Ooze fully matures from the last week of September to the early days of October. Although its outdoor flowering time is relatively short, it yields high with each square meter producing at least 10 ounces of buds per plant at harvest.

Have you ever smoked or grown your own The Ooze? Please let me know what you think about this marijuana strain in the comments below.

4 comments on “The Ooze Strain”