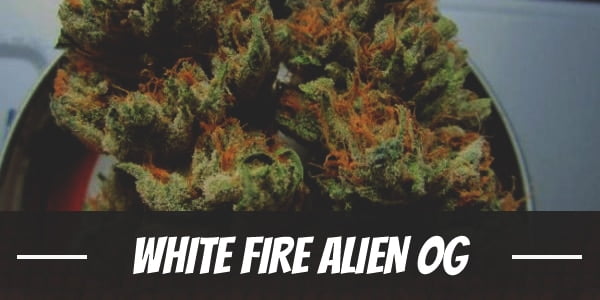 White Fire Alien OG, from its name alone, sounds sinister. It may very well be so as it comes with an insane amount of THC. Not that it is going to zap anyone to smithereens, but what it does is to induce a deep, dreamy relaxation.

The strain took its name from its parent strains. One is The White (also called Triangle in the past). Named as such for its white crystals, a hybrid that delivers a balanced mind and body high. The other strain is Fire Alien Kush, developed by the same breeder as White Fire Alien OG – OG Raskal Genetics.

Fire Alien Kush traces its lineage to Fire OG and Alien Kush. Once grown, it either leans towards one or the other strain. Nonetheless, it is a very potent strain that can take people racing in the universe across galaxies.

In combining both genetics, White Fire Alien OG inherited the potency and many of the traits of its parent strains. However, the effects it gives to users are different. For instance, instead of taking people to a speedy high much like Alien Kush, this one is dreamier.

As mentioned, White Fire Alien OG has an insane amount of THC. At up to 27%, its psychoactive properties are as intense as any strain can get. It acts very quick too. Almost as soon as taking the first toke, it slams into the head and the body like an asteroid. Immediately, the mind swirls in the euphoric sensation that not just enhances the mood but also makes users feel extremely happy. The buzzing and electrifying high ebbs down to the body causing a tingling sensation at the back of the neck and down the spine.

Once its Indica side creeps into the body, users fall into a state of deep relaxation and stay locked on the couch. Depending on how much one uses, and how tolerant an individual is, the strain is likely to cause a foggy mind. Not that it is a bad thing because that is the primary purpose of White Alien Fire OG – that is to induce a dreamy and heavy body stone.

Remember what the household cleaner Pinesol smells like? In some ways, that is what comes to mind once users open the container. White Fire Alien OG, besides the lemony diesel aroma, also comes with a sweet blend of damp earth.

Traces of the OG lineage is evident in the scent emitted by White Fire Alien OG. In some ways, when it comes to how it tastes, it is an upgrade. It comes with the same blend of earth, lemon, and citrus, but it is more pronounced.

There are many popular strains that are direct descendants of the White Fire Alien OG. Read our full review on White Gorilla Strain

First things first. White Fire Alien OG is not for everyone. Specifically, people who are predisposed to anxiety issues or panic attacks should avoid this strain. It is because one of the reported effects it has on some people is that it can cause mild paranoia.

As mentioned, it is also a very potent strain. The buzzing high it delivers is enough to cause a few people to feel dizzy too. In some cases, it may also lead to having a headache.

Being cannabis, users can also expect to experience dry mouth and eyes.

Remember that even when used in moderation, some of these conditions may occur. Whether it is enough to cause a discomfort or not is dependent on individual tolerance and consumption.

One of the things people love about the OG family is their ability to crush stress. With that in its genetics, White Fire Alien OG does that as well as any others and then some more. People with depression and other related or similar conditions will find the uplifting high a welcome relief. If for only a few hours, the mental comfort allows these people to recharge and manage their emotions and mindset better.

Used in only a small amount, some people may use it during the day. In most cases, though, it is best to use it at the end of the day. That is because of the heavy sedating effects that it has which makes users feel sleepy and drift off to sleep.

Finding seeds of White Fire Alien OG can be a challenge. But if some growers were to get ahold of it, then they can opt to cultivate it indoors or outdoors.

Most people opt to grow cannabis indoors. It should thrive whether they use soil as a medium or hydroponics. It is also ready for flowering within 8 to 9 weeks. The estimated yield of White Fire Alien OG is 10 to 12 ounces of buds per square meter.

The plant thrives in a warm climate and should transition to bloom stage during the last half of October. A conservative estimate of its yield is 12 ounces per plant.

Have you ever smoked or grown your own White Fire Alien OG? Please let me know what you think about this marijuana strain in the comments below.