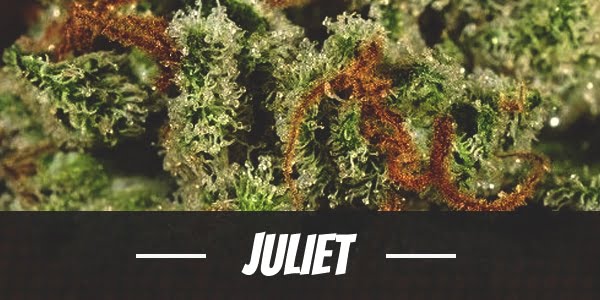 Juliet is one of the most elusive strains in the world. We know that she exists. In fact, she has touched the lives of many users already. Unfortunately, it appears that the strain may not be available. Waiting for the breeder to bring it back to market may be futile too. One reason for that is that no one even knows who developed it. Nonetheless, we do know more than a few things about her. For example, we know Juliet comes from a good breeding.

Both the parent strains are notable for their distinct reasons. One is Cinderella 99 or better known as C99. Some people also call it Cindy. Bred by Brothers Grimm, she is quite a potent strain that induces intense mental effects. Not only does she come with delightful scents, but she is also an excellent producer.

The other parent strain is NYC Diesel. Bred by Soma Sacred Seeds using two pure landrace strains, this is a multi-awarded hybrid that has won the cannabis cup numerous times. One of its most notable traits is its being among the top choices for party use.

Both Cinderella 99 and NYC Diesel passed on their Sativa heritage to Juliet. As one can expect, our featured strain does not disappoint in delivering an electrifying euphoric buzz. It does so without taking users over the edge. Instead, people using it tend to be more sociable and remain productive.

By any measurement, Juliet is an intense cannabis hybrid. With some 15% to 20% THC content, people should be mindful of consumption. In reality, some people go for extreme highs and psychedelic experiences. A natural tendency for these people is to use more than what is deemed as within personal limits. Of course, that is not how most people should use this strain. To experience it at its best, then be sure to stay within individual limitations.

At its onset, users should feel an electrifying sensation that comes barreling into the mind and the body. It results in a euphoric buzz in the head which trickles down to the body. Feeling energetic, most people should find themselves motivated. It is further aided by a degree of mental clarity and heightened sensitivity to the surrounding.

Alone, there is an overwhelming sense of happiness that set in. But used with other people, it makes for a fun experience with lots of laughter.

Juliet comes with a small Indica side. While it is not enough to induce a sedating physical high, it provides a degree of body relaxation. More important, it seems to serve as an anchor to prevent the cerebral effects from further intensifying.

It would be a suicide to talk about females and how they smell. Fortunately, we are referring to the strain. Juliet emits a very sweet odor and a mix of wood and earth. It also comes with a sharp note of blueberry. Obviously, these are the traits inherited from Cinderella 99.

Much of its aroma carries over when it comes to its flavors. To make it more enticing, its smoke is not only smooth but also has a hint of berries and herbs. The exotic taste of Juliet should prove to be a delight to almost anyone who uses the strain.

One can describe the effects of Juliet as not only beautiful but also dazzling. Perhaps it is a little bit too much as some people may feel dizzy. It could also be too much to take for a few who may have a headache. Aside from these conditions, users can also expect to experience dry mouth and eyes.

Adverse effects come with the use of cannabis. About the only difference from one to another strain is how severe it is. Often, the reactions are mild. But that is when people use only a small amount and well within own tolerance levels. However, the symptoms of these conditions also increase as more is used.

The benefits of using Juliet is not only limited to recreational purposes. Even if it does not come with much of CBD content, the effects delivered by the strain have pharmacological value to medical cannabis users.

Mostly, the medical benefits of Juliet are psychological and behavioral. For instance, in inducing happiness, she enhances the mood of users. Not only does it become effective in wiping out stress. It also helps people with depression and similar conditions manage and cope.

By swinging the mood and inducing the feeling of happiness, most of the users tend to focus on anything else by any physical discomfort ailing them. It works well as a pain-reliever for mild pains and aches.

As it also makes users feel energetic and motivated, then it also works well in negating the effects of fatigue.

It is hard to find someone who already is cultivating Juliet to obtain a clipping. Even seeds are not available at this time. That is not to say that it will no longer appear in the market. Just in case some vendors do offer it, be sure to only buy from the reputable ones. The last thing one needs is purchasing fake seeds.

Based on what we could gather, Juliet is quite easy to cultivate. Not that dummies can grow it successfully without a thought. But for those who exert an effort in learning the techniques, there is no reason not to nurture it until it produces buds.

It will take around 9 to 10 weeks before the plant is ready for flowering. Once it does, it will not be long before growers can harvest 10 to 12 ounces per square meter.

In the open and under a warm environment, she starts to flower sometime between the third to fourth week of October. The estimated yield outdoor is at least 12 ounces per plant.

Have you ever smoked or grown your own Juliet? Please let me know what you think about this marijuana strain in the comments below.