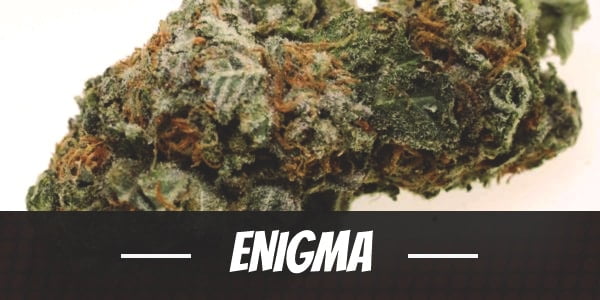 Life is not about playing the what if game. But looking back in history, it can be fun. For example, during the second world war, what if the German Enigma code was not decoded?

Germany may have won the war that was to end all wars. Today, instead of the English language, this article might be in German. Yes, the world would not have been the same at all. But the fact is that the world as we know it today is due to the efforts of countless heroes. One of them is Alan Turing.

Alan is an English scientist and mathematician. He was also considered as the father of theoretical computer science and artificial intelligence. Furthermore, he was the person credited with breaking the Enigma code. With that, the downfall of Hitler was only a matter of time.

In honor of him, AlphaKronik Genes named one strain Enigma. The seed bank developed it by crossing Blue Dream with one of their strains – Snowdawg 2.

Blue Dream is one of the most popular strains on the West Coast of the USA. It is also a descendant of the notoriously famous Blueberry. So, besides its delightful aroma, the strain is also notable for its invigorating mental high complemented by soothing body relaxation.

Snowdawg 2, the other parent strain, took some three years for AlphaKronik Genes to develop. They attempted to create a hybrid that is closest to the original clone-only Snowdawg. Once released, it went on to be listed as one of the High Times Top 10 strains of 2008.

As a result of this genetics, Enigma took the best of both parent strains and today has given recreational and medical cannabis users an experience that blends both the mental and body high.

Enigma means mysterious. True to its name, the effects of this strain can be confusing to some people. While AlphaKronik Genes have developed a Sativa-dominant strain, many other sources have cited it as having a higher Indica side. It is possible that the seeds are not stable in the sense that there are at least two phenotypes that grow out of it.

Though, regardless which side is more dominant, the effects of Enigma balances out.

At its onset, the strain induces a euphoric cerebral buzz that uplifts the spirit. Users feel happier and more cheerful, which may result in bouts of laughter.

Once the physical effects creep into the body, an overwhelming relaxation sets in. Depending on how much one uses, it could lead to a couch-lock. Used in moderation, though, most people should have no trouble going about their daily routine.

One thing to note is that even one was to use a Sativa-dominant version of Enigma, the cerebral effects it delivers is pronounced, but never overwhelming. It may cause a little buzzing high, but it is not something most people cannot handle. At any rate, the strain does come with a more potent Indica effects.

Enigma may be elusive and something that the Germans did not want the Allied forces to know about during the war. But the strain is quite the opposite as it announces its presence with a pungent earthy odor with a strong note of citrus. Not that it is a bad thing because most people find its aroma extremely delightful.

If its enticing aroma is not enough to get people hooked, then try its rich and flavorful smoke that is a mix of wood and hints of citrus and lemon. It also comes with a tangy aftertaste.

Enigma, compared to many other strains, does not cause as many adverse effects. Sure, like all cannabis hybrids, users can expect to experience some degree of dry mouth or dry eyes. But other than that, there are no other reactions.

However, that does not mean that it cannot cause other conditions. Typically, many strains can also cause dizziness or have a headache. Used too much of this hybrid and maybe a few may experience these adverse effects.

There are two three things that Enigma is exceptionally good at when it comes to medical use.

One is in the way it uplifts the mood and bring a sense of happiness to its users. It benefits people who are having a hard time coping with their emotion such as those with depression and anxiety issues.

Another is that deep body relaxation that it induces. It helps soothe the muscles and release tension from the body. It also has traits that help reduce pain. Hence, people with chronic illnesses may benefit from the comfort that it provides.

Finally, people using Enigma are likely to find themselves sleeping even before its effects completely subsides. For patients and anyone with trouble sleeping, the strain can help with that. Although it is not recommended for daytime use because it induces drowsiness, it does make for an excellent evening use cannabis.

People thinking of growing Enigma may have to take its pungent odor into consideration. Outdoors, its scent can be smelled by neighbors. Indoors, growers will want to install carbon-activated filters to eliminate its odor.

The indoor flowering time of Enigma falls in the ninth to tenth week. Once it is ready, its estimated yield is 10 to 12 ounces of buds per square meter.

Growers can expect the plant to start flowering anytime between the third to fourth week of October. Once ready, expect to pick up brightly colored green buds with orange hairs. Each plant is also likely to produce north of 12 ounces.

Have you ever smoked or grown your own Enigma? Please let me know what you think about this marijuana strain in the comments below.