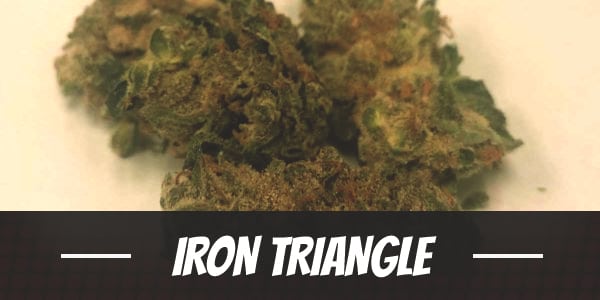 The origins of White Triangle OG, also known as The White, are mysterious but it is said to trace its lineage back to Jacksonville, Miami, and Tampa. It is an excellent strain that produces dense buds that look as though it were doused in sugary trichomes. In spite of this, it is does not produce a strong aroma which makes it great for enthusiasts who are sensitive to smell yet it remains highly potent.

Gupta Kush is the complete opposite. It has a strong aroma that can flood the growing room with hints of earth and wood. It is also equally potent, inducing a body-centered high that caps the day off and knock users out. Apart from its recreational and medicinal benefits, it is also a preferred growing strain. Due to its stable genetics, it adds sturdiness to the strains that it is crossed with.

According to breeders from Colorado Seed Inc., the White Triangle OG plant they received was a bit finicky. Thus, they crossed it with Gupta Kush and wounded up with Iron Triangle.

The Iron Triangle builds upon the genetics of its parents while also creating a name of its own. It has earthy undertones and the distinct OG aroma of lemon and diesel. The hybrid is extremely potent, demonstrating THC levels that nearly test the 30% range. Upon consumption, it delivers an inviting blend of cerebral and physical psychoactive effects.

Iron Triangle is slow to star, but it is not one to be trifled with. It has potent levels of THC that average around 25% to 28% that could hit users all at once if consumed without caution. In moderation, however, its high is pleasantly euphoric.

Its gradual mood enhancement uplifts the spirits and turns the day around. It is an impressive recreational strain that casual users can use with like-minded friends. It raises confidence, allowing one to share funny anecdotes or mind-blowing ideas. Regardless of the topic of conversation, it will likely end in a giggling fit.

Eventually, a tingling sensation swarms the body down to its lowest extremities. It blankets users in relaxation as it soothes the muscles and kneads it until it is free of tension. In all likelihood, one will want to spend the rest of the day lounging on the couch while watching Netflix or listening to spa music to amplify the experience.

Iron Triangle has a sour aroma that perfectly exhibits the diesel and lemon terpene profile of its OG lineage. It has an earthy undertone that perfectly counteracts the tanginess too.

There is a sweetness to Iron Triangle’s smoke that is immediately noticeable at the first swig. Eventually, however, its sour lemon flavors tantalize the palate along with a hint of diesel. On the exhale, it leaves an aftertaste of earth which balances out the sourness.

Users can expect dry eyes and a cottonmouth are two common reactions to toking Iron Triangle. A rarer experience is dizziness and paranoia depending on the dosage. As such, being wary of the amount of puffs taken is necessary for a pleasant experience.

Stress relief is one of the most common uses for cannabis. Iron Triangle has such capabilities. Its uplifting and relaxing cannabinoids bind with the endocannabinoid system to release the accumulated tension and stress. In its place, the bud plants an innate sense of calm that dispels negativity.

People suffering from psychological distress will find comfort in the strain as well. It clears the mind and slows down the fast-paced thoughts caused by anxiety. As a result, users are able to think clearly and rationalize a situation that may have otherwise triggered emotional imbalance. At the same time, it

It is particularly impressive in relieving physical health problems. For instance, it has a soothing buzz that eases aches and pains all over the body. Its muscle-relaxing capabilities also appease spasms that make moving around difficult. Deep in comfort, it quickly lulls users to bed; giving patients with sleep problems an effective solution against insomnia.

Iron Triangle has an impressive growth profile. It is superbly stable, sturdy, and high-yielding influenced by Gupta Kush and the award-winning Triangle OG. It also grows to a manageable height which further improves its ease of growth as growers can place it indoors without worrying about either lateral or vertical space.

It grows best outdoors in a sunny environment where it can soak up the nutrient-rich sunlight while dancing to the breeze. However, it has no problems thriving in areas like the northern hemisphere where the days are shorter, and it is colder so long as it is safe against elements like frost or heavy rains. Sowing the seeds in pots will make moving the plant indoors easier.

Alternatively, one could just dedicate a tent or growing room to Iron Triangle where it is easier to adjust factors like lighting, temperature, and humidity. Growers with knowledge of advanced growing techniques may apply the Sea of Green method to improve yields by weaving branches into the net and coaxing the colas from the lower nodes so that it receives adequate light. Pairing it with another technique like topping will create multiple budding sites.

Iron Triangle has an indoor flowering period of 8 to 9 weeks. The high yielder produces between 12 to 14 ounces of buds per square meter once ready for harvest at the chop down.

Outdoors, Iron Triangle grows vigorously. Growers can expect at least 12 ounces of buds per plant by the second or third week of October.

What is the Iron Triangle strain yield?

Iron Triangle yields 12 to 14 ounces per square meter indoors and 12 ounces or more per plant outdoors.

How much THC does Iron Triangle have?

What are the origins of the Iron Triangle strain?

Iron Triangle was the result of a cross between Gupta Kush and White Triangle OG.

Have you ever smoked or grown your own Iron Triangle? Please let me know what you think about this marijuana strain in the comments below.