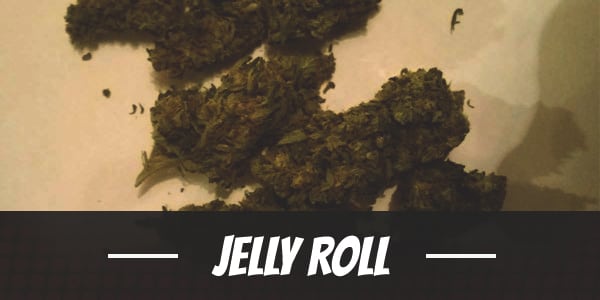 Jelly Roll’s lineage comprises three of the most vigorous strains – God Bud, Grapefruit, and Gupta Kush. All produce plants with improved immunity, a sturdy frame, amazing scents and flavors, copious amounts of resin, and plump buds that make up the dreams of many growers alike.

As expected, the Indica-leaning strain’s buds are a sight to behold. Each nug is humongous, occupying a sizeable amount when placed in one’s palm, and densely packed. Not to mention, it has a sheen that sparkles when shined upon.

No doubt, Jelly Roll is one of the most delicious strains out in the market right now. Its flavors are a blend of tropical fruits such as grapes, grapefruits, oranges, and lemons that make the water mouth. But this is only the beginning.

Its terpene profile hints at the subtle mental stimulation that Jelly Roll delivers as well as its invigorating energy. Beyond that, however, is a contradicting heavy body high that makes the eyelids droop as it starts to take charge.

Jelly Roll’s effects bring out the best in Sativas and Indicas. It has the euphoric head high of the former and the heavy-limbed comedown of the latter. At the onset, however, the cerebral effects prevail.

The Indica-leaning strain starts with a gentle mood lift that prepares users for the upcoming relaxation. It releases worries and pushes back problems that preoccupy the mind. In its place, there is an innate sense of happiness that continuously uplifts the spirits.

Complementing the initial head high is a soothing buzz that travels from the temples to the lower extremities, coursing its way through the back of the neck and spine. It creeps in slowly, barely noticeable until users suddenly realize that movement has become difficult. But it is far from a couchlock. If any, it is a content laziness – a physical calm – that blankets the body in relaxation. The heaviness in the limbs will knock users out, especially the tired ones who have wrestled with a stressful day.

One thing to remember about Jelly Roll is that it is a potent bud. Enmeshed in its elongated but dense buds are THC levels that span from 18% to 20%. Users who are unaccustomed to the potent and powerful effects will find that it might be too overwhelming. Thus, practicing correct pacing is important.

Enthralling the senses at the first whiff is Jelly Roll’s aroma of grapefruits and citrus. Accompanying it are hints of grape, anise, and earth that balance out the tangy sweetness.

Jelly Roll has a fruity flavor with sweet tinges of grapes, grapefruits, and citrus. Enhancing it is the herbal but spicy taste of anise which further brings out its tanginess. Subduing it on the exhale is the taste of rich but sweet earth which gradually intensifies as the smoke leaves the mouth.

Most likely, users will be left with arid, irritated eyes and a cottonmouth while smoking Jelly Roll. It is a typical reaction to marijuana’s moisture-inhibiting cannabinoids that many seasoned users ignore. Beginners who are unaccustomed to the dry spell may want to stay hydrated throughout the day.

Moderation is an essential key to enjoying Jelly Roll. Being a potent strain, a little goes a long way and choosing to go beyond one’s personal tolerance levels could lead to unwanted reactions such as paranoia.

It is acceptable to assume that Jelly Roll is a recreational strain. After all, that has been the misconception regarding cannabis for years. However, what is not to be discounted is its ability to manage the symptoms of many mental and physical health issues.

It could be used as an end-of-day stress reliever that eliminates worries and calms the nerves, slowing down one’s heartbeat to a comfortable rhythm. Similarly, it could be used as an antipsychotic that temporarily provides refuge to stop anxious thoughts from overwhelming the mind. In doing so, it provides clarity to a shrouded mind.

Highly potent, Jelly Roll also has natural painkilling properties that make it an equally effective analgesic. It delivers a soothing buzz that irons out cramps, releasing any of the tension in the muscles. Excellent against cramps, it reduces the aches and pains caused by uncontrollable muscular contraction all over the body. It could pass as an antiemetic that prevents nausea and vomiting by relaxing the stomach, an uncanny reprieve that cancer patients may want to try.

Its best use, however, lies in its sedating spell. Following an hour or two of relaxation, it is likely that users will fall into a deep, unencumbered slumber that regenerates energies for the upcoming day. People with insomnia will find that the it silences the thoughts and worries that keep one awake at night.

God Bud, Gupta Kush, and Grapefruit are three of the most high-yielding strains in the cannabis industry. It passes on its reliable genetics to Jelly Roll, which has developed a stable growing pattern, sturdy frame, and above-average resistance to common pests and diseases. It can grow almost anywhere – gardens, farms, greenhouses, growing tents, and rooms.

For full control over important growing factors, cultivating the plant indoors is the best option. One can switch out the lights during the flowering period for a 600-watt HID fixture that will encourage bud production. At the same time, one can also install ventilation systems as well as fans to help reduce humidity and circulate air.

Growers with advanced knowledge on growing techniques may create a Sea of Green setup. It requires cultivating at least four plants in a single square meter and coaxing the main cola so that it receives light. This particular method will shorten the flowering period while encouraging higher yields.

Outdoors, growers will have to strategically cultivate the plant in an area that is well-hidden from pests and has no structures obstructing the sunlight. It thrives best in a sunny and warm environment but can withstand the cooler weather of the northern hemisphere while still churning out high yields.

Jelly Roll has an indoor flowering period of 7 to 9 weeks. Although short, its yields are not compromised as each square meter reward growers with 10 to 12 ounces of buds per square meter.

Harvest comes around the last few days of September to the middle of October for growers living in the northern hemisphere. It yields high, producing at least 12 ounces of buds per plant after drying and curing.

What is the Jelly Roll strain yield?

Jelly Roll yields 10 to 12 ounces per square meter indoors and 12 ounces or more per plant outdoors.

How much THC does Jelly Roll have?

What are the origins of the Jelly Roll strain?

Jelly Roll was created from a mix between God Bud, Grapefruit, and Gupta Kush.

Have you ever smoked or grown your own Jelly Roll? Please let me know what you think about this marijuana strain in the comments below.