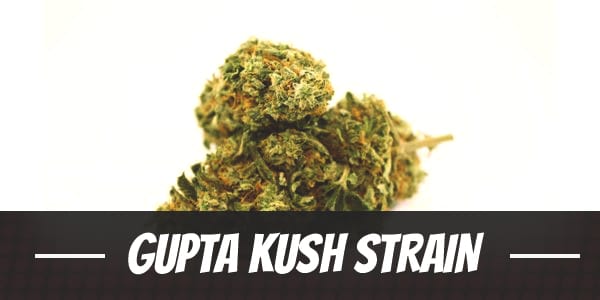 Dr. Sanjay Gupta is a neurosurgeon and the head medical correspondent for CNN. In 2009, he wrote a piece on why he would vote ‘No’ on cannabis. However, he has since changed his mind. Interviewing people who have turned to the green herb for relief and doing further research for an assignment from the news company enlightened him of the need for an alternative reprieve. From then on, he became an advocate.

In honor of the awareness he has spread to others, Colorado Seed Inc. named a strain after him. It is a cross between two industry staples Ghost OG Kush and Blue Moonshine. The former is a hybrid that is impressively potent and therapeutic. Even better, it does not induce a couchlock. Meanwhile, the latter is a true Indica that induces a soothing body high which could annihilate pain in an instant. It is widely praised for its ease of growth and sturdy structure.

Sanja Gupta Kush, or Gupta Kush for short, is what many would consider as an Old School Indica. It has a notable earthy aroma with soothing capabilities. It is quite versatile too. Aside from its stress-crushing physical buzz, it clarifies the mind and improves one’s disposition.

Beginners may want to be wary of Gupta Kush. It is devastatingly potent and potentially intoxicating when used beyond moderation. However, it could still be enjoyable if one knows how to pace consumption or has a friend that could guide the dosage.

Gupta Kush, despite boasting up to 25% THC, does not induce a head-slamming high that shocks users awake. Instead, it tends to introduce itself first as a gentle mood lift that empties negativity from the mind. It leaves users feeling happy on the inside and more confident in oneself.

Casual users will find that the mental clarity is not only good for an upbeat disposition, but also for small goal-oriented tasks. It sharpens one’s aptitude for detecting details, amplifying sounds, and absorbing fascinating sights. In piquing the interest, it also enhances focus toward one’s surroundings.

After about an hour or two, its Indica prowess begins to probe. It soothes the body, kneading the muscles free from tension or tightness that grip it and envelops users in a thick blanket of relaxation. In all likelihood, a heaviness will settle on the limbs that intensifies the lazy contentedness.

There is a slight chance of arousal from the feeling of liberation. Most of the time, however, users fall asleep on the bed rather than the arms of a lover.

Gupta Kush has a prominent earthy aroma with sweet undertones and a woody overtone that intensifies once the buds are either crushed or combusted.

Its flavors are a little different from its fragrance in that there is a tinge of blueberries. It quickly dissipates though and is replaced by a sweet wood that encompasses the initial fruitiness. On the exhale, it leaves an earthy aftertaste that could last for hours after the last toke.

Finding a fault in a strain as beneficial as Gupta Kush is quite difficult. After all, people find more interest in its recreational and therapeutic effects. However, if there is any, it is likely to be the typical red eyes and cottonmouth which are both mild.

Releasing stress is essential to living a fulfilling life. It can rekindle passion, bring back motivation, and increase productivity in people who seem ‘out of it.’ More importantly, it brings back one’s zest for life.

Gupta Kush induces a euphoric rush that clears away unnecessary worries in the mind, while instilling a sense of confidence and purpose. It enhances the mood too, uplifting and fortifying the spirit. In a similar manner, it could be used to manage symptoms of depression such as hopelessness, despair, and overwhelming dread which are exacerbated by the condition, especially when it is chronic.

It could also be used as an analgesic and antiemetic. It relieves various aches and pains while also relaxing the muscles. In this way, it prevents unwanted contractions that would make it difficult to rest properly or perform simple tasks such as eating. Thus, apart from the light invigorating buzz that helps bring back the appetite, the strain can also act as a food aid so the stomach processes food better.

After an hour or two, a drowsiness settles in. It makes for an impressive sleep aid to combat the side effects of insomnia. Moreover, its sedative qualities enhance both quantity and quality of sleep, so users wake up feeling refreshed.

Gupta Kush showcases many of the well-loved attributes of Indicas. It is stout, branchy, and compact. Not to mention, it has above-average resistance to many common pests and diseases such as root rot – largely in part of its robust root system which helps the plant stay strong and healthy.

It is highly adaptable and will grow anywhere with relative ease. Growers can provide it with a small grow room or dedicated tent for the plant where one can easily control factors such as lighting, temperature, and humidity. It thrives best in an open space though. In an area with lots of sunlight and where the breeze makes it dance, it can soak up more nutrients, develop stronger branches, stay aerated, and yield vigorously.

A Sea of Green setup will bring out its full potential. The method shortens the vegetative phase, without hurting yields. However, it will require growing at least four plants in a single square meter of space. Indoor growers might need to install a ventilation system that will reduce the amount of moisture in the air. Another way to combat humidity is occasionally trimming and thinning out the plant, paying heed to sugar leaves.

It yields high at harvest, a trait it gains from its Sativa genes. Its buds have a fluffy look too; but, make no mistake, it is dense and heavy. Dipped in trichomes, it will likely leave a sticky trail of resin on one’s fingers or in the palm of one’s hand during a close inspection.

It takes Gupta Kush between 8 to 9 weeks to flower. Once ready for harvest, growers can expect up to 21 ounces of buds per square meter.

In the northern hemisphere, Gupta Kush exhibits fully matured flowers that are ready for reaping between the second and third week of October. The high yielder produces at least 21 ounces of buds per plant.

Have you ever smoked or grown your own Gupta Kush? Please let me know what you think about this marijuana strain in the comments below.