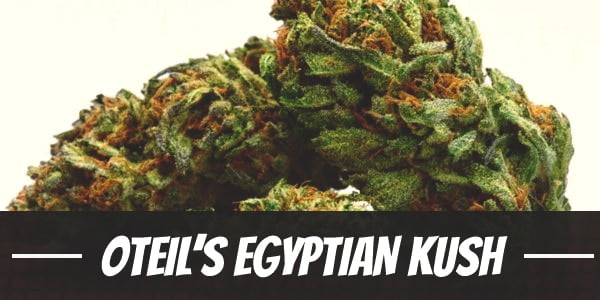 Many musicians are drawn to cannabis and have referenced it in their songs. Some of the more popular examples are Snoop Dogg, Wiz Khalifa, Willie Nelson, and Gene Simmons. Another one to join the list is Oteil Burbrige, the Allman Brothers’ and Dead & Company’s bassist who has won a Grammy.

Collaborating with T-Dogg Gardens and GroundSweel, the trio produced Oteil’s Egyptian Kush. Supposedly, it is a cross between Alien OG and OG Kush but there has been no confirmation. Regardless, it has built a reputation on its own for its well-balanced effects, therapeutic reprieve, and excellent performance as a growing strain.

One thing to remember though is that Oteil’s Egyptian Kush is highly potent, containing between 15% to 19% THC. While seasoned users may find that this is the right choice, beginners may have to be wary of accidentally consuming more than one can chew. Otherwise, the promised pleasantness will develop into the unwanted greening out.

Smacking users at the onset is a euphoric buzz that awakes the senses. It clears the mind, melts away worries, and enhances the mood. Most likely, it will leave enthusiasts feeling happier and lighter as it reinvigorates one from fatigue. For casual users, the upbeat disposition brings color back into an otherwise dull or dreary day. It piques one’s interests toward tasks, so goal creation and completion are easier.

Having snacks prepared is always a good idea. Although gentle, the stimulation can still wake the appetite. Users may want to go to the kitchen in search of food or to prepare a light meal, breaking focus as a result. However, if it were not a work day, then this would be a totally good time to concoct different recipes.

Its Indica abilities show up after a few hours. It starts at the temples as a light pressure before moving to the lower extremities. As it persists and intensifies, it leaves users feeling deeply relaxed as tensions leave the muscles. In all likelihood, one will want to find a couch and lounge or enjoy some ambient music.

Oteil’s Egyptian Kush has a pungent aroma that could easily fill a room. There is a distinguishable overtone of wood. Breaking and combusting it apart, however, reveals its earthy undertones.

Coating the tongue at the first swig is an earthiness that gradually develops into the taste of sweet cherries and anise. A diesel eventually takes over as users continue to savor the flavor. On the exhale, it leaves a woody aftertaste that lasts for hour seven after the last toke.

By now, users should know that the no strain is scot free of the usual dry eyes and cottonmouth. It lasts for hours and is mild but manageable. Staying hydrated and avoiding certain drinks like coffee and alcohol will keep it from exacerbating.

Long-sufferers of depression and other mental health issues like anxiety or PTSD will find an ally in Oteil’s Egyptian Kush. It has an uplifting onset that temporarily pushes back negative thoughts. Users will find that it also silences worries, self-depreciating comments, and cynicism and replaces it with a calmer disposition along with an enhanced mood. Due to the similarity in symptoms, it can also work against chronic stress. Meanwhile, patients with ADD/ADHD will appreciate how it piques curiosity and prolong one’s attention on a particular task.

One of the best times to use Oteil’s Egyptian Kush is right before a meal. It stimulates the appetite, allowing users to eat a meal heartily. Moreover, it prevents the stomach from regurgitating the food by appeasing nausea with its antiemetic properties.

As an analgesic and anti-inflammatory, Oteil’s Egyptian Kush could be used to relieve aches and pains regardless of its origin, frequency, and intensity. It works best against arthritis as well as head, back, knee, and joint pains. It could also be used to manage spasms and cramps. It has muscle-relaxing properties that reduce tension to prevent contraction.

A half and half strain, it should come as no surprise that Oteil’s Egyptian Kush exhibits both Indica and Sativa traits. It is relatively tall and the plant itself is lined with leaves that are neither broad nor thin but in between. Exposed to cool temperatures, it could produce a purple hue that could easily make it a standout.

It grows virtually anywhere – indoors, greenhouses, or the outdoors. Its above-average resistance to many common pests and diseases allows it to thrive regardless of where it is grown. It is also quite versatile. Growers may subject it to either the Sea or Screen of Green method to shorten the flowering period without affecting yields.

Cultivated outdoors, it would be best to situate the plant in an area where it can receive the most sunlight without being pestered by on-lookers or pests. In such conditions, it will grow vigorously; producing a robust structure that is further strengthened by a light breeze.

At harvest, it produces buds that have a fluffy popcorn-sized buds that are heavy with density. While it is usually a forest to deep green color, purple hues can still manifest if growers simply lower the temperatures or wait until it is almost time for winter. Manicuring the buds and keeping the sugar leaves will also increase its attractiveness to possible users.

After flowering for 8 to 10 weeks, it produces between 12 to 14 ounces of buds per square meter. Higher yields are possible under optimal conditions and using advanced growing techniques.

In the northern hemisphere, Oteil’s Egyptian Kush flowers from the second to the last week of October. At harvest, it yields at least 14 ounces of buds per plant.

What is the Oteil’s Egyptian Kush strain yield?

How much THC does Oteil’s Egyptian Kush have?

What are the origins of the Oteil’s Egyptian Kush strain?

Have you ever smoked or grown your own Oteil’s Egyptian Kush? Please let me know what you think about this marijuana strain in the comments below.