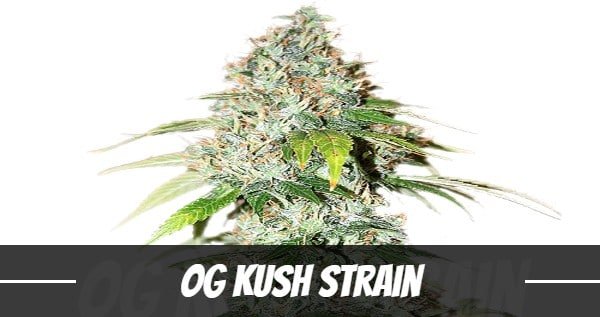 It is widely touted around the world as a major best-seller.

Its unmistakable flavor, mixed with the strength of its effects, guarantees a bomb high.

OG Kush hits even the most experienced smokers with a heavy buzz – something that can be attributed to its above-average THC levels.

About the OG Kush weed strain

With its history and origin heavily disputed, there are many stories and fables about OG Kush.

Rumors say the “OG” in its name stands for the once largest global grow-site OverGrown.com, which was famously shut down by the Canadian police in 2006.

Other stories are about how its name is an ode to the California strain Original Gangster.

The most solid of all stories surrounding this strain, explains its parentage as that of a mix of the notorious Chemdawg strain, crossed with an exotic Old World Paki Kush.

In terms of its name, it has been noted that OG apparently stands for “Ocean Grown”, but also for simply “Original”.

Mostly indica, OG Kush is a hard-hitting strain. It generates a mental buzz that can be sedating and can cause couch-lock, especially in high doses.

OG Kush is a powerful relaxant, widely used to induce a chilled out state, with a mix of a constant state of happiness and joy.

Its uplifting euphoria makes it a great tool to unwind with at the end of a long and strenuous work day.

While feeling slightly static under the influence of OG Kush, a sense of getting stuck and spaced out has been observed.

It is also known to induce a feeling of hunger, causing one to get the “munchies” and enhancing flavors and the desire to want to eat.

OG Kush’s high is famously strong, hitting you with a heavy, euphoric rush of energy.

OG Kush autoflower boasts of a strong earthy note, which it is famous for.

You can tell by how it smells that the buds are sticky and rich in resin. It carries hints of lemon and a general citrus fragrance.

Some say that a plant makes their environment smell like a pine forest, a clear indication of how potent and distinct OG Kush really is.

Much like its fragrance, OG Kush tastes fresh and earthy. It’s obvious woody taste carries a touch of spice and has been said to taste a bit like something that was thrown on the barbecue.

Its sweet notes are prevalent and mixed with the lemon-lime citrus notes, create a unique blend, explaining why it has maintained its high demand over the years.

A strong presence of high levels of THC, has made OG Kush a very strong strain – with surprisingly gentle side effects.

The common dry-mouth issue is present here, like in most major strains, often accompanied by a dry-eye sensation.

Other adverse effects include a slight dizziness and lethargy, usually in those who are not accustomed to the power of its high.

OG Kush can also cause a mild anxiety and paranoia in some, while others have observed a slight headache, although cases like these are rare.

Because of its reliable potency and its high THC levels, OG Kush is a strain that is popularly prescribed to help treat an array of ailments.

It can provide deep muscular relief and relaxation, long-lasting relief from headaches, migraines and nausea.

It is a favorite among those suffering from anxiety and depression, because of its ability to induce a state of peaceful unwinding.

Insomnia and restlessness is also therefore easily cured with the help of OG Kush.

Legend says that it has grown popular among gang members, for the fact that it contains a high level of CBD – something that can help ease physical pain caused by gunshot wounds.

Whether or not that is true, OG Kush does offer itself up as a powerful pain-reliever, for a broad spectrum of physical as well as mental pains.

There are many popular strains that are direct descendants of OG Kush. Read our full review on Yoda OG Strain, Yeti OG Strain and Venus OG Strain.

Adding to its high price, is the fact that it can be difficult to grow and cultivate OG Kush.

Slightly sensitive and susceptible to powdery mildew, it can also be the victim of bugs and disease due to its low resistance.

OG Kush is best grown in carefully optimized settings, and if kept outdoors should be provided with a hot and tropical climate to encourage growth.

When grown indoors and in a controlled micro climate, OG Kush can yield 17 ounces per m2, with an expected flowering time and average of somewhere between 8-9 weeks.

OG Kush, when carefully tended to and grown in an outdoor setting can yield around 16 ounces per plant. It is ready for harvest sometime in early October.

What is the OG Kush strain yield?

How much THC does OG Kush strain have?

What are the origins of the OG Kush strain?

Have you ever smoked or grown your own OG Kush? Please let me know what you think about this marijuana strain in the comments below.