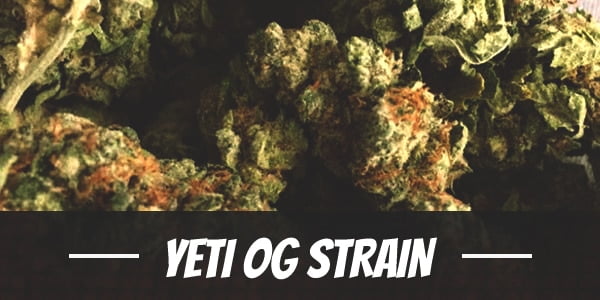 In Nepalese folklore, a yeti is a large creature that lives in the Himalayas. It supposedly resembles a bear or an ape due to its height. The cannabis strain Yeti OG is just as tall. Not to mention, it has a propensity for cold weather as well.

Apart from being the former being fictional, the main difference between the two is that the latter does not incite feelings of worry or dread. Instead, it tranquilizes the negativity with its soothing euphoria. It is also quite a potent strain with at least 20% THC.

To create it, Loompa Farms took the world-renowned OG Kush. From it, the strain gained its signature lemon and earth undertones as well as impressive high. The breeders then added Sour Diesel to counter its weakness against mold as well as reinforce its growth profile. The original cross was formerly called Headband BX but it was later changed to Yeti OG after it grew so tall.

Apart from being an impressive recreational and medicinal strain, Yeti OG is also a great grow. It is highly resistant to pests and humidity-related problems like mold. Not to mention, it is sturdy too just like the legend it is named after.

A slow starter, Yeti OG’s effects usually do not begin until after 15 minutes have passed from the first puff. Hence, users should be wary about using it and pace the strain instead. In this way, one creates a pleasant experience without the couch lock.

During the onset, it delivers a stimulating head high that boosts creativity. It clears the mind first to create space for more productive thoughts or groundbreaking ideas. Feeling motivated, casual users can pursue a simple passion project or go over some light documents with a fresher perspective.

For some, however, the upbeat disposition and mental clarity brings about a flurry of cheerful memories. It makes for a great recreational strain that facilitates conversations among like-minded friends. Not only that, the uplifting head high leaves giggling over the simplest reasons.

After about an hour or two, a creeping pressure surges through the body. It makes the body limber by soothing each muscle it passes and releasing any tension or tightness. Although it is intense, it does plant a heaviness in the limbs until after the comedown. Hence, users can still fulfill some light physical tasks before retiring for the night.

Yeti OG has a pungent scent with notable earthy overtone. Its undertones are quite sour, reminiscent of either lemon and diesel or fuel. Complementing it is a peculiar but refreshing blend of nuts and pine.

Yeti OG has a creamy smoke that tantalizes the palate with the taste of nuts and earth. Swirling it around one’s mouth reveals its sour undertone of lemon. Meanwhile, on the exhale, it leaves a refreshing aftertaste of pine but with the tanginess of diesel.

Cannabinoids have moisture-inhibiting properties. Hence, the dryness is no longer a huge surprise for seasoned users. It is particularly noticeable in the eyes and the mouth but mild. Moreover, it goes away on its own after a few hours. A more concerning side effect of smoking Yeti OG is greening out. It is characterized by a disorienting awareness that not only incites dizziness but also triggers anxiety. Pacing and moderation, however, will keep the effects at bay.

At up to 3%, Yeti OG has a higher CBD content compared to other recreational strains. Hence, it is of significant therapeutic value to the medical marijuana patients. Its uplifting yet relaxing head to toe high provides a reprieve for a myriad of maladies.

Stress, for example, is greatly reduced when using Yeti OG. It has a soothing euphoria that calms overwhelming dread triggered by stressors as well as the anxiety that comes with it. In a similar manner, it also manages symptoms of depression and other mental health issues like PTSD.

One of the best times to use Yeti OG is right before a meal. It has an invigorating effect on the stomach. As such, it can also be a source of comfort to patients dealing with eating disorders such as anorexia or cachexia.

Its high levels of THC, along with its CBD, also have a painkilling effect. It eases various aches and pains caused by different ailments including cramps, headaches, and fatigue. Users eventually become more drowsy as the soothing buzz spreads all over body. With its sedating qualities, Yeti OG effectively enhances the quality and quantity of sleep so one wakes up feeling invigorated.

Indoors, Yeti OG grows like a typical Indica. It is short and bushy. Its stalks, as well as its branches, are thick too. However, it needs to be pruned often as its dense foliage can get in the way of light and air circulation which will stunt its growth.

Aspiring growers may train the plant through the Sea of Green method. It increases yields by taking advantage of its compact structure. Another way to raise turnout is by using a hydroponics setup. It delivers nutrients directly to the roots, resulting in explosive growth. However, it is quite expensive and requires experience. Soil is a more practical for beginners as it is cost effective. Not to mention, it improves the flavor profile of the strain.

Cultivated outdoors, Yeti OG stretches like a Sativa-leaning strain. It produces longer, larger colas that are packed to the brim with resin. However, its lankier structure will require protection against harsh weather like heavy rains or strong winds which might break its branches. Frost will also be a problem as it can kill the plant overnight. In such cases, installing a temporary enclosing is enough.

Yeti OG has an indoor flowering period of 9 to 11 weeks. In spite of this, the long wait is well rewarded as it produces 10 to 12 ounces of buds at harvest.

In the northern hemisphere, Yeti OG flowers from the middle of October to the early days of November. It yields at least 12 ounces of buds per plant at harvest.

Have you ever smoked or grown your own Yeti OG? Please let me know what you think about this marijuana strain in the comments below.