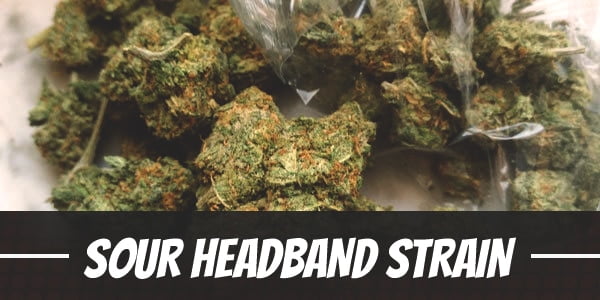 Headband is one of the most distinct strains in the industry. It distinguishes itself by the light pressure it induces in the lower temples, mimicking the sensation one feels when wearing a headband. Next, it scrunches up the forehead with its tangy taste of lemon. To enhance its medicinal effects, the breeders added Sour Diesel. It has a long-lasting buzz of energy that reduces stress. However, it also intensified its sourness and THC levels.

Sour Headband boasts THC levels between 17% to 25%, making it an impressively potent strain. It induces the same initial pressure around the temples at the onset. It clears the mind and brings back uplifting thoughts. Eventually, it travels toward the rest of the body in a wave of relaxation. However, it can also be used beyond recreation as a medicinal aid.

In spite the fact that it leans toward Indica, Sour Headband has more of a Sativa high. It enhances the mood through a rush of euphoria. Uplifting spirits and invigorating the body is a gentle buzz of energy throughout the body.

Almost immediately after the onset settles, a behavioral change can be noticed. Smiles broaden as the cerebral high persist during the session. It inspires a sense of happiness from within as well as a boost in confidence. Becoming a little more talkative is not uncommon for some users. Because of this, it makes for a great recreational high that can be used among friends.

Complementing the mental clarity is an upcoming body high which comes two or three hours after the first puff. It starts at the temples as a light pressure that eventually ebbs down as it begins to intensify. In all likelihood, users will want to lounge around the couch or the bed.

One thing to remember is to use the strain with caution. Although its effects are largely stimulating, it can take quite a while to begin. Using beyond individual tolerance can overwhelm the mind instead of keeping the experience pleasant.

Sour Headband has a sharp pungent scent that intensifies once the buds are either broken apart or combusted. Enhancing its sourness is the taste of diesel and lemon that later taper into a light note of citrus.

Sour Headband is, without a doubt, one of the sourest strains in the cannabis industry. It bursts in the palate with flavors of lemon and citrus complemented by a hint of flowers. However, it is later dominated by the sharp aftertaste of diesel on the exhale.

Dryness in the eyes and the mouth is to be expected when smoking cannabis. It rarely gets in the way of a pleasant experience especially among seasoned users. However, beginners may down a few glasses of water throughout the high to manage the discomfort.

Although commonly associated with Sativas, it is possible to experience anxiety and paranoia while smoking Sour Headband. Its capacity to sharpen the senses is usually associated with overconsumption but can be affected by one’s previous disposition. Because of this, users should always consume the bud in moderation.

Sour Headband is presumably a recreational strain. However, it is also an impressive choice for patients looking for a reprieve against a variety of mental and physical afflictions. Among its best uses is reducing and managing chronic stress which can lead to the early onset or exacerbation of health issues.

It delivers a happy high that instantly uplifts the mood. Meanwhile, a soothing euphoria calms the dread and anxiety that overwhelms a fatigued mind. Because of this, it makes for a great stress reliever and anxiolytic as well. The same cerebral high also has effects that temporarily assist long sufferers of depression and other mental health issues such as PTSD.

In high levels, THC turns into a natural painkiller. It relieves a variety of aches and pains through a soothing head to toe buzz. As it relaxes the muscles, it also invigorates users from exhaustion or overwork. Its anti-inflammatory properties, on the other hand, reduce swelling and redness that can sometimes trigger pain through uncontrollable spasms or contractions in the affected area.

Sour Headband exhibits the typical growing traits of Indica strains. It is naturally short but absolutely sturdy. Its branches, as well as stalks, are thick enough to withstand the strong winds of the northern hemisphere. It also gives it’s the ability to withstand its cooler temperatures.

Although hardy, it still requires protection against harsh weather such as torrential rains or snow. The former will break its branches especially when it patters heavily on the plant. Meanwhile, the latter ensures overnight doom on an early winter. Preparing a temporary enclosing for such cases will suffice.

Its availability as feminized form shortens the growing process as users are assured of a full batch of female plants. For higher yields, growers may manipulate the plant using either the Screen or Sea of Green method. Another way to improve turnout is by using the hydroponic setup. It delivers nutrients straight to the roots, possibly doubling harvest. However, for beginners, soil is an easier medium for beginners.

TIP: Buy seeds like Sour Headband at our seed bank

Sour Headband has an indoor flowering period of 8 to 10 weeks. It yields high with each square meter expected to produce at least 10 to 12 ounces of buds at harvest.

In the northern hemisphere, Sour Headband blossoms between the middle of October up to its last week. It usually yields at least 12 ounces of buds plant at full maturity.

Have you ever smoked or grown your own Sour Headband? Please let me know what you think about this marijuana strain in the comments below.