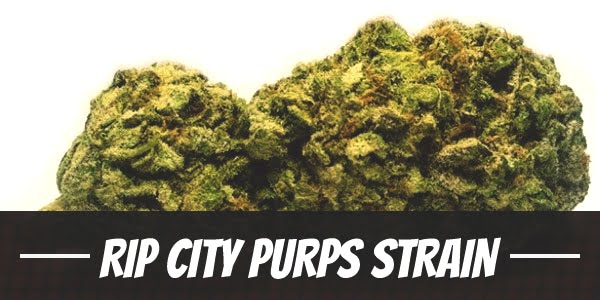 Rip City is usually used to refer to the Portland Trail Blazers, an NBA team. It was coined by the play-by-play announcer Bill Schonely who had been supporting the team. A strain of the same name exists in the cannabis industry developed by Alphakronic Genes as a tribute to the team and its hometown Portland in Oregon.

In creating Rip City Purps, Alphakronic Genes used its own berry-flavored Gobstopper. It has long-lasting body high that thoroughly relaxes the body thoroughly and releases any accumulated stress throughout the day. Purple Urkle was later added to intensify its colors and growth profile.

Coincidentally, Rip City can also be a reference to a place where enthusiasts get high after ripping out from a bong. And, it is exactly this effect that Rip City Purps has on enthusiasts that feast on its delicious fruity bud. It has a tranquilizing head-to-toe high that not only provide recreational benefits but also therapeutic reprieve.

Rip City Purp’s onset is barely noticeable until 15 minutes after the first few puffs. It starts as a gentle uplifting rush that eventually develops into a wave of euphoria. With enhanced moods, users are left feeling happy and upbeat throughout the session.

It is best to have some food around before the body high begins. Otherwise, one will end up feeling hungry but unable to head to the kitchen for a quick snack. With that said, it is highly recommended that treats should be situated at least an arm’s length away for easier access.

After about an hour or two, the strain’s Indica effects begin to manifest. It starts at the temples as a creeping buzz that gradually intensifies as it moves down to the rest of the body. Soothing each muscle is a light pressure that undoes knots to release tension that prevent one from unwinding any accumulated stress. In all likelihood, users will be blanketed by a deep relaxation that gradually lulls one to a couch lock.

One should remember to use the strain in moderation. Its THC levels of 15% to 23% can sometimes be too powerful, especially for beginners. Having a seasoned friend guide one through pacing and moderation will immensely help with keeping the experience pleasant.

Rip City Purps smells much like freshly unearthed buds. Enhancing its earthy profile is the sweet scent of flowers. Breaking it apart reveals a fruity aroma reminiscent of dank grapes which is later accentuated by a hint of spiciness after combusting the buds.

There is a noticeable hint of herbs in Rip City Purps’ smoke. As such, it should come as no surprise that the strain lightly coats the palate in an earthy spiciness. Accentuating it is a sweet fruity blend of grapes and berries especially as it sits in the mouth. On the exhale, it leaves a floral aftertaste that perfectly complements its whole profile.

Most likely, users will experience a cottonmouth while smoking Rip City Purps. After all, like other strains, it has moisture-inhibiting cannabinoids that interfere with saliva production. It can also dry the eyes at times. Both usually go away after a few hours but users may down a few glasses of water throughout the day will help manage the discomfort. Using the strain in low moderation is also highly recommended to avoid greening out.

Rip City Purps is a versatile strain that makes for a great therapeutic aid. Its cannabinoids, THC and CBD in particular, provide immense relief to a variety of conditions. Its uplifting high, for instance, has a positive impact on one’s negative thinking and behavior.

It calms the overwhelming dread that many face on a daily basis while boosting confidence. At the same time, it replaces self-depreciating thoughts with a subtle rush of euphoria that brings back happy memories. Through it, the strain provides temporary relief to mental health issues like depression, PTSD, and anxiety.

Its high levels of THC contribute to its ability to soothe different kinds of aches and pains all over the body. It delivers a soothing buzz that relaxes the muscles and prevents it from uncontrollably contracting. Meanwhile, its anti-inflammatory properties reduce redness and swelling in inflamed areas. Because of this, it can also be used as an anti-spasmodic that prevents patients from suffering from spasms.

The Indica-leaning strain can also be used as a sleep aid. It has sedating qualities that usher in drowsiness while also enhancing the quality and quantity of slumber. As such, users wake up the next day feeling refreshed and invigorated.

Rip City Purps has the typical characteristics of an Indica plant. It is naturally short but its foliage is dense. Its stalks, as well as branches, are thick and can withstand the cold weather of the northern hemisphere. Because of this, it is easy to grow and is a great introductory strain for first-time growers.

Indoors, it will need to be thinned out often for better light and air circulation in the lower nodes. Otherwise, it can lead to humidity-related problems like mold or mildew which can rot the buds or the roots and stunt its growth. A controlled environment allows growers to adjust factors like temperature, lighting, and humidity. By exposing it to cooler nights, growers can bring out its purple hues.

Its short and compact structure makes it a great candidate for the Sea of Green method. Growers can plant at least 4 plants in a single square meter to produce higher yields. Mediums also play an important role. Setting up a hydroponics system, for example, almost doubles turnout since it delivers nutrients directly to the roots. However, it can be too complex for beginner green thumbs. Soil is a better choice as it is cost-effective and easier to manage. Not to mention, it boosts the plant’s terpene profile therefore producing tastier buds.

Rip City Purps has an indoor flowering periodof 7 to 9 weeks. It produces at least 10 to 12 ounces of buds per square meter once fully mature.

In the northern hemisphere, Rip City Purps blossoms from the last few days of September to the second or third week of October. At harvest, each plant produces a minimum of 12 ounces. However, more can be expected as it perforks better in the outdoors.

Have you ever smoked or grown your own Rip City Purps? Please let me know what you think about this marijuana strain in the comments below.