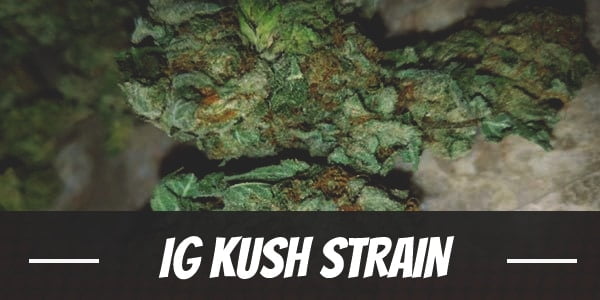 OG Kush is undoubtedly one of the most prolific strains in the market. Its genetics alone have resulted in the creation of multiple hybrids in West Coast. Meanwhile, its distinct flavor earns praise among critics. Truly, it is the ‘OG.’

If anything, the only aspect to improve in the strain is its sturdiness. It is quite prone to mold and mildew due to its low resistance to humidity. To this end, Imperial genetics decided to cross it with Deadhead OG which greatly improved its growth profile and thickened its frame.

IG Kush brings together the best qualities of its parents. It has the classic citric flavors of OG Kush but with the growth profile of Deadhead OG. Its head-to-toe high is a proven recreational companion that also provides significant therapeutic relief.

IG Kush is an immensely potent strain. It has a THC level of 20% to 25% which can easily overwhelm any beginner that consumes it. However, it is quite pleasant when used in moderation. Its onset, which starts slowly as a gentle rush of euphoria, leaves users feeling happy.

Preparing snacks ahead of time is always a great idea. After all, once the creeping Indica effects intensify, users will find it hard to head to the kitchen. Placing it nearby or an arm’s length away is much more convenient.

Surging through the muscles is a tingling sensation that blankets the body in deep relaxation. It comes two to three hours after the initial effects and introduces itself gently as a light pressure in the temples. Gradually, as it intensifies, it plants a heaviness in the limbs that entices one lounge around the couch. In all likelihood, users will end up falling asleep as the tranquilizing effects continue.

Although it has subtle stimulating head buzz, IG Kush is still best used late in the afternoon or early evening. This is because it eventually leads to as intense sedation that makes the body seem heavier than it really is. Using it in the morning can be counterproductive.

IG Kush is a pungent strain with a sweet profile. It has an earthy undertone that complements its fruity overtones of grape and citrus. A sour hint reveals itself when the buds are broken apart. However, upon combustion, it produces a candy-like smoke that tantalizes the senses.

Swarming the mouth at the first puff is the sweet taste of ripe fruit. It also has the subtle sour undertones of grapes and citrus accentuated by candy. On the exhale, it leaves an earthy aftertaste that lasts for hours.

Dryness is a common reaction to the moisture-inhibiting cannabinoids of marijuana. It exhibits itself in the eyes and the mouth but is barely noticeable. Moreover, due to its mildness, it is often ignored by more seasoned users. For beginners who experience discomfort, downing a few glasses of water will help manage the unavoidable discomfort.

IG Kush provides patients suffering from mental and physical afflictions with a temporary reprieve. Its CBD and THC, along with cannabinoids like terpenes, deliver an overall restorative high with multiple therapeutic benefits.

At the onset, it delivers an uplifting onset that improves moods throughout and beyond the session. It also calms the dreadfulness that stress brings as well as the feeling of overwhelming anxiety. Thus, apart from being a stress reliever, IG Kush can also be used by long-sufferers of depression and other mental health issues like PTSD to manage symptoms.

One of the best times to use IG Kush is right before a meal. It stimulates the appetite and brings back the appetite. Hence, it is a major source of comfort for people who have lost the urge to eat a meal heartily including patients who suffer from eating disorders such as cachexia or anorexia.

It delivers a soothing high that first soothes the stomach and the rest of the body. It begins in the temples as a light pressure that removes aches and pains that prevent one from moving around freely. Eventually, as it intensifies, the deep relaxation lulls one to a long slumber which invigorates users the next day.

IG Kush is a sturdy strain. It has thick stalks and branches that enhances its ability to withstand a variety of growing factors. Among it is the cooler weather as well as short hours under the sun. Because of this, it is a great strain to grow in gardens or farms for growers of the northern hemisphere. Of course, it still needs protection against early winters which bring frost. Without a temporary enclosing, it can die overnight resulting in wasted efforts and time.

There are many growers who prefer cultivating IG Kush indoors. Controllable environments pose an advantage as it allows growers to adjust factors like temperature, lighting, and humidity and provides added protection for the plants. Aspiring breeders can also choose between a variety of mediums such as hydroponics and soil.

For higher yields, growers can train the plant using the Sea of Green method. This requires planting at least four seeds in a single square meter so it produces more budding sites. It will need to be pruned though. Its dense foliage sometimes harbors moisture in between its buds that can lead to rotting or the development of humidity-related problems like mold or mildew.

IG Kush has an indoor flowering period of 7 to 9 weeks. It produces between 10 to 12 ounces of buds per square meter. Growers may delay harvest by a week or two to enhance yields.

In the northern hemisphere, IG Kush fully matures between the second week or third week of October up to its last few days. Each plant is expected to yield at least 12 ounces of buds once ready for harvest.

What is the IG Kush strain yield?

How much THC does IG Kush have?

What are the origins of the IG Kush strain?

Have you ever smoked or grown your own IG Kush? Please let me know what you think about this marijuana strain in the comments below.