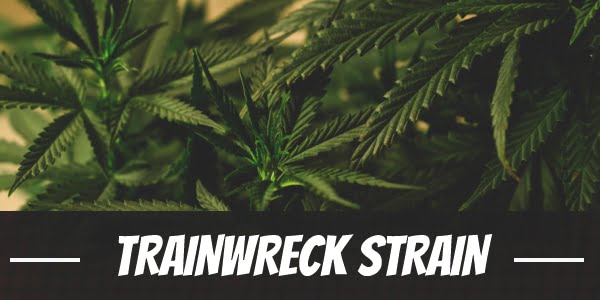 A hybrid that leans towards the sativa end, but with its own Indica properties, Trainwreck strain will have you maintain a clean mental high, while relaxing and putting the rest of your body at ease.

It has a well-deserved reputation for being one of the best at stimulating a euphoric high, with a potent hit that can render any inexperienced smoker physically feeling slow or unable to move.

Another strain that didn’t get it’s name from its effects, but rather, from the circumstances it was created under, is Trainwreck.

The myth-like story says that the name comes from the the California growers who had to uproot and move their crop in the 70’s, because there was a trainwreck nearby and they feared being discovered.

Trainwreck was created out of Mexican and Thai sativa, that was cleverly crossed with an Afghani indica.

The result is a sativa-dominant hybrid, with a potentially heavy indica couch-lock.

This makes Trainwreck an effective sedative, very compatible with slow down sundays and afternoons that are tasked to be simple relaxing.

This strain has an above average THC level, recorded at an average of 20% or above, and is therefore also much-wanted and needed as a useful medical strain.

A mellow body high can be observed in this 65% / 35% sativa dominant strain.

Trainwreck is a bit of a cerebral rollercoaster, with a potency high enough to hit you with a happy, euphoric high almost instantaneously.

Trainwreck is quoted as being a bit of a mind-bender, creating a rush of joy and a feeling of being inspired.

It is uplifting and relaxing at the same time, conjuring up just the right kind of emotions and a warm fuzzy overall feeling.

This strain is perfect for those who are looking for something to inspire them to be creative.

Trainwreck can be quite heavy in its effects, due to its high THC levels, so proceed with caution, especially if you are not an experienced smoker. A little goes a long way with this strain.

Trainwreck is known for being of the dank variety. It will light up the entire room with its aroma, smelling like a forest full of pine and cedar.

It has slight citrus undertones, which makes for a pretty fragrant experience. This strain can also smell slightly sweet mixed with a dash of spice.

When smoked, Trainwreck can taste like fresh pine needles, reminiscent of a pine tree forest fire. It has a sharp lemon aftertaste and its pungent presence is very prominent.

Cut with a bit of an earthy flavor; Trainwreck also has a little spice to it that sticks to your lips and makes the whole experience extra enjoyable.

This strain is often described as a gentle Trainwreck, which is why it also becomes apparent that its side effects aren’t much to worry about. Among its most prevalent adverse effects noted, dry mouth and dry eyes have both been observed after the use of Trainwreck.

There are many popular strains that are direct descendants of the Trainwreck. Read our full review on White Walrus Strain that consist of a blend of Trainwreck, Jack the Ripper and Trinity

Another minor side effect is that of a hint of anxiety in some, mixed with a bit of paranoia in others. Trainwreck mainly causes a slight sensation of confusion, which, when added with a bit of dizziness, can create a bit of an unwelcome sensation at times.

This very special strain is a favorite of many who seek medical help. Trainwreck has been proven to be very effective in the battle against chronic pain.

It is a powerful relaxant, which can help ease muscle spasms and other pain conditions that are not easily cured by the standard prescription medication available to us, and lacks serious side effects.

Trainwreck is also very effective for the treatment against common and chronic stress, and many other mental health issues. It comes highly recommended for those who need a little help with their depression and anxiety or even PTSD.

When it comes to treating underlined side effects of other medical treatments, Trainwreck can be the perfect choice. It is effective in restoring the loss of appetite due to heavy chemical treatments such as chemotherapy and radiation, and can ease any aches and pains that may come with the nausea, even easing migraines and headaches successfully.

This strain is of the more versatile variant, able to flourish in both indoor and outdoor settings. The plants tend to grow quite tall and thick-stemmed and will need a little help with some trimming so that it doesn’t spread out too far.

Trainwreck resin levels can be quite prominent and is visually quite obvious when this strain flowers. Outdoors it prefers to be kept in a dry and frost-free environment and can take a little longer to be ready for harvest it that setting

On average, Trainwreck can produce about an estimated 18 ounces per square meter. Its flowering time can be anywhere between 8 to 10 weeks, and is relatively easy to grow in a controlled indoor setting.

Growing this strain outdoors can prove to be a little tricky, and lengthy. Trainwreck, however, when successfully grown, can produce quite a generous harvest. It can yield an average of up to 25 ounces per plant, and is ready for harvest around late October to early November.

What is the Trainwreck strain yield?

How much THC does Trainwreck strain have?

What are the origins of the Trainwreck strain?

Have you ever smoked or grown your own Trainwreck? Please let me know what you think about this marijuana strain in the comments below.