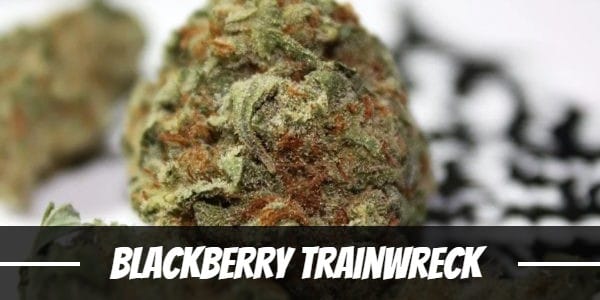 Blackberry Trainwreck, or Blueberry Wreck, buds are truly a spectacle to behold. Its pine-cone shaped buds are forest green in color accentuated by blue and purple undertones. Blanketing it are fiery hairs and a stunning coat of trichomes. But, that is not at all. The plant is well-loved for the seemingly balanced high it induce that pairs a mind-boggling onset with a deeply relaxing comedown.

It is not difficult to guess Blackberry Trainwreck’s lineage. From its name, one can deduce it is a cross between the famed Blackberry Kush and Trainwreck and indeed it is. The mostly Indica genes of the latter influenced its offspring’s structure. Meanwhile, its up to 20% THC and clearheaded high is an inheritance from the latter’s Sativa effects.

Because of its impressive THC levels, Blackberry Trainwreck is undoubtedly a go-to strain for many seasoned users. This is not to say that beginners should avoid the bud totally but rather to use it with caution as it has the potential to be quite debilitating. In moderation, however, enthusiasts can enjoy the bud to its fullest.

In spite of its Indica-leaning genes, Blackberry Trainwreck has a well-balanced high. Its onset, for instance, is cerebral much like a Sativa’s and begins almost immediately after the first two to three puffs. Ushering in the mental clarity is a rush of euphoria that, more often than not, leaves users feeling happy.

For users stuck in a mental slump, the subtle stimulation to the brain is just enough to get the creative juices going. With renewed inspiration for projects and a free flow of thoughts, staying motivated to concentrate on tasks for long periods of time becomes almost easy.

In time, a tingling sensation responsible for the initial upliftment ebbs down from between the eyes. It comes in waves and soothes each muscle it passes. In all likelihood, many will find themselves lounging around in their couches. Keeping its intense body effects from crippling users is the persistent Sativa buzz.

Blackberry Wreck blends pungent earth with a sweet assortment of berries – including the blue and black varieties. A musky spiciness fills the air once the bud is crushed or combusted.

Carrying over to Blackberry Trainwreck’s flavor is its sweet mix of berries. Enhancing it are floral undertones with notes of wet soil. On the exhale, it leaves a cooling aftertaste reminiscent of mint.

With all due respect, Blackberry Wreck is an excellent strain. This is in spite of the dehydration that usually dries the eyes and the mouth especially with cannabinoids interfering the production of saliva. Due to their mildness, most seasoned users ignore the symptoms but beginners may down a few glasses of water to stay hydrated.

In high doses, users can ‘green out’ – a condition that combines dizziness and anxiety – from the potent predominantly Indica strain. Some may also experience a mild headache apart from those mentioned above. Pacing and moderation, however, will keep such effects at bay.

It would not come as a surprise if people considered Blackberry Wreck to be highly recreational. After all, such a belief about marijuana has persisted more than a decade. Moreover, its psychoactive compounds deliver a feel-good high that almost instantly enhances the mood. However, the subtle cerebral stimulation provides relief to its users especially those constantly bombarded by stress. In a similar manner, it temporarily manages symptoms of chronic anxiety, depression, and other mental health issues like PTSD.

Apart from its uplifting high, Blackberry Trainwreck is also held in high regard for its analgesic abilities. Through its soothing body high and its powerful Indica effects, it soothes away aches and pains of various muscles beginning from the temples.

As the eyelids begin to droop with heaviness, users eventually drift off to an unencumbered slumber. No matter though as it is an important part of the healing process that helps the body regenerate cells and replenish energy. Moreover, Blackberry Trainwreck enhances the quality and quantity of sleep.

Blackberry Trainwreck is very attractive. It is vibrant with eye-catching undertones of blue and purple. Not only that, it is tall but rarely gets past 6 feet. Still, aspiring growers with limited spaces can shorten the vegetative period to manage the plant’s height. Topping it early can also encourage higher yields.

Apart from its size, Blackberry Wreck’s nearly hybrid influence is also evident in the structure of its stalks and branches. Both are sturdy and resilient against a variety of problems caused by high levels of moisture in the air, fluctuations in weather, and strong gusts of wind. Not only that, neither break off from the weight of its buds.

A great advantage of Indica-leaning strains like Blackberry Trainwreck is its hardiness. It performs well in indoor growing spaces like greenhouses or outdoor environments such as farms and gardens. It is quite versatile as well, adapting to both the Screen of Green or Sea of Green methods with much problems.

Aspiring growers can enhance their batch’s terpene profile by cultivating it in soil and harvesting it within its flowering period. Extending it by a week or so will probably take away some flavor but will allow the plant to produce more.

It takes 8 to 10 weeks for Blackberry Trainwreck to fully bloom. Once mature, growers can harvest between 10 to 12 ounces of buds per square meter.

A farm grown Blackberry Trainwreck flowers anywhere from the first to the last week of October. A vigorous producer, it yields at least 12 ounces of buds per plant.

What is the Blackberry Trainwreck strain yield?

How much THC does Blackberry Trainwreck have?

What are the origins of the Blackberry Trainwreck strain?

Have you ever smoked or grown your own Blackberry Trainwreck? Please let me know what you think about this marijuana strain in the comments below.