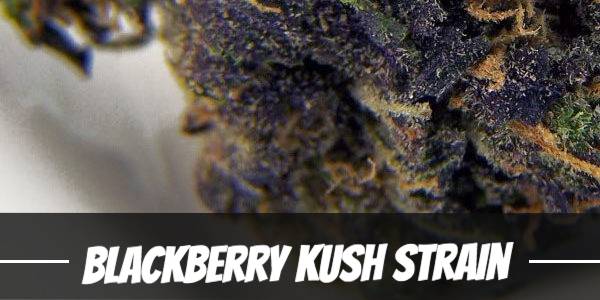 A strong indica, this fragrant, potent bud is popular among veteran smokers and recreational users alike.

Blackberry Kush strain is as sweet-smelling as its name suggests.

Its strong relaxing components make it a hit in the medical cannabis scene, and it is because of that, that Blackberry Kush has stayed in demand since it first showed up in the industry.

Blackberry Kush is an indica-dominant strain that stems from a combination of an Afghani indica crossed with the hybrid Blackberry.

It is one of the famously high-quality strains that originated in the diverse California medical cannabis scene.

This mostly-indica is renowned and recognizable because of its strong skunky odor.

Blackberry Kush is stronger than your average in effect too, and a little goes a long way.

This strain has a powerful calming effect that is often recommended to patients struggling with managing persistent chronic pain.

Blackberry Kush induces an array of soothing effects, that kick in almost immediately. This strain is one sweet heavy hitter, and can de-stress you in even the most anxiety-riddled situations.

This indica is a reliable relaxant, that will guide you into a serene, laid-back mood, and eventually rock you to sleep. Blackberry Kush will make you delve into a unique euphoric high, leaving you feeling uplifted and full of feelings of happiness.

You can browse our seed selection to purchase your very own Blackberry Kush feminized seeds. Check out our marijuana seed bank for our full collection.

Blackberry Kush, because of its body-heavy high, is best smoked at the end of the day, unless you have the whole day to kill on pure relaxation. Described as a sort of “brain massage”, this one will have you unwinding to good tunes and munchies while floating on a cloud all day long.

This strain’s aroma is so sweet and noticeable, that you will be able to smell it in a room, long after the bud has exited. Blackberry Kush smells much like a spiced bowl of berries, and is distinct in its sweet blackberry scent. This bud is very pungent and appetizing, and will leave your mouth watering.

Blackberry Kush tastes almost exactly the same way it smells. This kush will come at you with a strong earthy diesel flavor, cut with a strong sweet blueberry presence. This indica simply tastes like a mouthful of berries, every time you take a drag, a sweet sensation that stays in your mouth long after you have exhaled.

The most consistently reported side effects of this strain are quite minimal. Blackberry Kush can make you feel slightly dehydrated at times, making your mouth feel like it is filled with cotton, and leaving your eyes feeling dry.

Sometimes, but very rarely, a slight headache may occur, which may be accompanied with a bout of dizziness. A bit of dizziness may also be observed when smoking Blackberry Kush, which is likely to be due to its high THC content. This may also leave you feeling slightly paranoid, when you have had too much.

Blackberry Kush is popularly prescribed by doctors for a long list of illnesses. This indica has proven to be very effective in managing feelings of stress and anxiety that come from busy and demanding lifestyles. Blackberry Kush works well for patients seeking a way to unwind and relax after a long day at work.

For anyone who struggles with restlessness and insomnia, Blackberry Kush may also be useful in finally getting a night of restful sleep in. It has a way of easing you into a state of relaxation, and gently getting you ready for a long awaited deep sleep.

Doctors also love to prescribe Blackberry Kush to patients who suffer from minor and even major pain. Muscle spasms, joint pains and migraines are eased with the help of this powerful and effective indica, nixing the pain for hours on end.

For those suffering from a lack of appetite, Blackberry Kush may also be a good option. This strain can help get rid of the nausea that may be present due to chemical cancer treatments such as radiation and chemotherapy. A quick smoke of Blackberry Kush may increase appetite and encourage the patient to consume food normally.

This strain is recommended for indoor cultivation. Is Blackberry Kush is trimmed well and grown in optimized settings, it can truly flourish and be rewarding to keep. This indica is resistant to molds, however, caution must be exercised nonetheless, due to this strain being prone to fungus and spider mites.

A fast-flowering plant, fully blooms within 7 to 9 weeks. It yields between 14 to 18 ounces of buds per square meter.

usually flowers from the last week of September to the middle of October. Once ready for harvest, it yields between 25 to 42 ounces of buds per plant.

What is the Blackberry Kush strain yield?

How much THC does Blackberry Kush have?

What are the origins of the Blackberry Kush strain?

Blackberry Kush is believed to be the result of a cross between Afghani and Blackberry.

Have you ever smoked or grown your own Blackberry Kush? Please let me know what you think about this marijuana strain in the comments below.