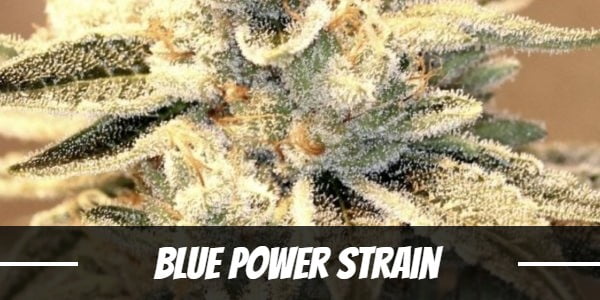 Blue Power is among the few head turning signature strains from Sin City Seeds and for good reason. It boasts stunning colors and a distinct citric aroma that washes over the mouth with zest when drawn in. Moreover, it is absolutely potent. Its heavy-hitting psychedelic effects crush away stress and a tranquil state of being.

In creating the strain, Sin City Seeds was an LA clone named ‘Power’ that is said to be a cross between Sour Double and Master Kush. They were later paired with White Moonshine to create the Indica-dominant strain now known as Blue Power.

One thing though, Vision Seed has created a strain by the same name. Its structure is entirely different as it is a cross between Skunk No. 1, Blueberry, and White Widow.

Blue Power is an impressive strain that carries between 15% to 23% THC. Interestingly, because of its Indica structure, its onset is mellow. Instead of slamming with users its intense effects, it creeps up slowly beginning a subtle rush of euphoria to the mind. Overall, its cerebral high inspires a sense of happiness from within that ultimately puts anybody in an upbeat disposition for the time being.

In time, a tingling sensation ebbs down from the temples. It comes in waves and soothes each muscle it passes. And as the body is enveloped fully in relaxation, a heaviness plants itself in the limbs and eventually lulls users to sleep.

It is best to smoke Blue Power at night to unwind after a long day at work as using it during the day can hamper productivity. Alternatively, users may smoke the bud on lazy days off work.

Blue Power has a pungent citric fragrance reminiscent of blueberries blended with lemons. Broken apart or combusted, it releases a barely noticeable earthy undertone that only shines when one gets a whiff of the bud.

Blue Power has a complex flavor that rivals its unique fragrance. Drawn in, it bursts in the palate in a tantalizing mix of blueberries and grapes enhanced by the sour taste of lemon. On the exhale, the smoke leaves an aftertaste of sweet fruit.

Dehydration is a common side effect of marijuana use regardless of the strain. Its symptoms are reflected in the form of red eyes and a cottonmouth due to cannabinoids interfering with the production of moisture in both areas. Most seasoned users usually ignore the dry spell as it is barely noticeable. Still, beginners may down a few glasses of water to stay hydrated throughout or after the session.

Being such a powerful Indica, Blue Power can sometimes cause a mild headache and pair it with a minor case of paranoia when used excessively. Pacing and moderation, however, will keep such effects at bay.

Ask any enthusiast in the street why they use marijuana and most will cite stress relief as a reason. This is not surprising though. In the United States, at least a third of users share the same purpose. In this regard, Blue Power works perfectly.

Looking to buy seeds like Blue Power? Check out our marijuana seed bank.

Through the combined efforts of its THC, CBD, and cannabinoids like terpenes, it induces a mood enhancing buzz that reduces stress levels of anyone using it. The recreational high also serves to temporarily manage symptoms of depression or PTSD like anxiousness and negativity.

Blue Power also has pronounced physical effects that make it an excellent analgesic. It soothes various aches and pains in the body including any sharp sting in the stomach that can potentially lead to nausea. In enveloping the body in deep relaxation, the Indica-dominant bud enhances the quantity and quality of sleep users will get at night. For this reason, it is perfect for people with sleeping disorders or patients suffering from the harsh effects of chemotherapy.

Blue Power is a joy to grow. It is short and absolutely sturdy. Its thick stalks can withstand various problems caused by either weather or moisture while its equally hardy branches rarely break off due to gusts of wind. Moreover, it is a highly adaptable plant that performs well in cold climates in spite of its propensity for warm, sunny days.

Still, many prefer cultivating Blue Power indoors where they can easily monitor its progress. Controlled environments also allow growers to adjust factors like lighting, temperature, and humidity to suit the current phase. Still, it is best to be mindful of the ratio of the latter two by keeping hygrometers all over the greenhouse or grow tent.

At the moment, Blue Power is only sold in regular form. Because this means that at least half the batch will turn up males, aspiring growers should apply pre-germination methods like soaking to increase the chances of producing calyx-filled plants. Meanwhile, Low-Stress Training will keep successful females from turning into hermaphrodites.

Blue Power has an indoor flowering period of 7 to 8 weeks with each square meter producing between 11 to 18 ounces of buds. However, growers may extend it by a week to harvest higher yields.

Garden grown Blue Power flowers from the last week of September to the second or third week of October. Once mature, it yields at least 11 ounces of buds per plant.

What is the Blue Power strain yield?

How much THC does Blue Power have?

What are the origins of the Blue Power strain?

Blue Power was created from a mix between Sour Double, Master Kush and White Moonshine

Have you ever smoked or grown your own Blue Power? Please let me know what you think about this marijuana strain in the comments below.