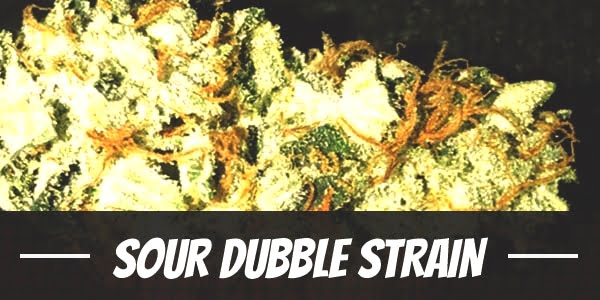 Sour Dubble has a stimulating but relaxing blend of effects that entice many lovers of hybrid strains in spite of its Indica-leaning strain. It starts with an uplifting head high that tapers into a relaxing body buzz that either keeps the body limber or lulls it to sleep. Its potent levels of 20% to 24% THC also has significant therapeutic effects. It crushes stress and fatigue to invigorate the body from tiredness.

Growers usually name new strains after its parents and Sour Dubble is no exception. It is the offspring of Sour Bubble and Rez Dog’s Sour Diesel. The former contributed to its sweet fruity profile as well as short flowering period. Meanwhile, the latter intensified its aroma and stress-crushing head to toe high. It also influenced its vigorous growth.

There is an older Sour Dubble thought to be a cross between East Coast Sour Diesel and Sour Bubble. However, its breeders and buds remain to be a big mystery. For this reason, B.O.G. Seeds decided to recreate the strain instead. Though it is not largely Sativa, its effects are similar to the original.

During the onset, Sour Dubble delivers a mentally clarifying high that invites one’s innate sense of happiness to the limelight. A behavioral change is immediately visible as dispositions turn upbeat within minutes after the first two or three puffs. In all likelihood, users will bask in cheerful memories, enhanced mood, and better confidence that contributes to one’s sociability.

For casual users, a clear mind can pave the way for enhanced creativity. It provides free space for thoughts to flow and form freely into ideas. Without a doubt, the rise in inspiration will also lead to improved focus so users concentrate with full brain power on completing desired projects.

The Indica-leaning strain also has energizing bodily effects to complement the stimulating head high. It keeps users limber and alert while finishing tasks. After about an hour or two, it gradually develops into a light pressure that ebbs down to the toes. It soothes the muscles and envelops users in deep relaxation. Using beyond individual tolerance can lead to a heavy-hitting high that settles into the limbs and an unwanted nap in the middle of the day.

Sour Dubble can be used any time of the day. In moderation, it is a great alternative to coffee as a pick me up in the morning or afternoon. Increasing the dosage, on the other hand, can lead to a restful sleep that recharges users up until the morning.

Sour Dubble is a pungent strain that fills the room with its sour diesel scent once a bag of its buds is opened. It has a subtle woody undertone with notes of sweet fruit lining its undertones. Breaking it apart then combusting it reveals a sharper aroma of spices and herbs.

Sour Dubble energizes the senses with its tangy overtones of fruit mixed with diesel. Sharp at first, it later mellows into a rich wood and herbs. It leaves a spicy but sweet aftertaste on the exhale.

It is not uncommon to feel some mild dryness around the eyes and the mouth. Although rarely uncomfortable, users may mitigate it by downing a few glasses of water and avoiding caffeine. It may also be accompanied by a headache especially when consuming beyond individual tolerance levels.

Together, Sour Dubble’s terpenes, THC, and CBD deliver an uplifting head high that not only enhances the mood but also improves one’s disposition. It temporarily covers up the self-depreciating thoughts with happy memories and better confidence. Thus, it is a great anti-depressant that manages symptoms of depression, anxiety, and PTSD. It can also double as a stress reliever.

Its physical effects have a restorative and energizing quality to it. For instance, it relaxes the muscles to free the unreleased tension caused by fatigue or over work. The same soothing properties also have a significantly positive effect on the gastrointestinal tract. It eases the stomach and prevents it from contracting or causing pain. In doing so, it also stimulates the appetite. Hence, it is a source of reprieve for patients with eating disorders such as anorexia or cachexia.

Users eventually become drowsy as the head to high psychoactive effects continue to free users of inhibitions. In all likelihood, one will fall asleep without realizing it. This is not a disadvantage though as the next day brings back an invigorated mindset.

Sour Dubble is a strain with a strong Indica-leaning profile. It is relatively short with a sturdy frame due to its thick branches and stalk. It grows well in various growing conditions and is highly recommended for beginners.

Indoors, it will need to be pruned often. Otherwise, moisture can seep into its dense foliage and develop into mold or mildew. Keeping humidity low is top priority with Sour Dubble. Hence, users are not only encouraged to thin out the plant but also install a proficient ventilation system.

The Sea of Green method brings out its full potential. Not to mention, it also maximizes small spaces so aspiring growers can ensure a huge turnout at harvest.

Sour Dubble has an indoor flowering period of 7 to 9 weeks. At harvest, it yields at least 10 to 12 ounces of buds per square meter.

Outdoors, Sour Dubble blossoms between the last week of September to the middle of October. Once fully mature, growers can harvest at least 12 oucnes of buds per plant.

Have you ever smoked or grown your own Sour Dubble? Please let me know what you think about this marijuana strain in the comments below.