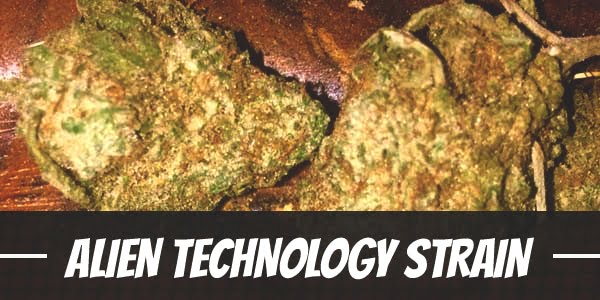 There are a lot of stories that surround Alien Technology. It is said to be from a landrace strain in Afghanistan that breeder OBSoul33t acquired from US Soldier. However, the intricacies of its history are a well-kept secret. Still, the strain has spawned among the most widely loved strains in the world including Alien Dawg and Alien Kush.

It is a staple among Indica lovers looking for a long-lasting high without the downtime. Alien Technology’s effects last for a good 6 hours. It crushes stress while enhancing creativity and making the body limber. It is also quite versatile. Beginners and seasoned users can adjust the dosage of its 13% to 19% THC to create a particular head to toe effect well-suited for either day or night.

Alien Technology is also an excellent medicinal strain. Its tropical-flavored terpenes invigorate the senses, so one stays awake or alert. On the other hand, its calming head high and tranquilizing body buzz provide a temporary reprieve to patients’ afflictions.

Alien Technology, compared to other Indicas, is much more stimulating especially during its onset. It delivers a gentle rush of energy that invigorates both the mind and the body, resulting in an almost instantaneous change in disposition. Users are not only happier but also upbeat.

For casual enthusiasts, the better mood helps create free headspace for thoughts to form and flow freely. It raises creativity levels as one is introduced to new concepts. The fresher perspectives allow one to work through or stay productive.

It is best to have some snacks around as using one’s brainpower can be quite hunger-inducing. Having food nearby will not only prevent one from being distracted but also fill the stomach while one concentrates on finish tasks at hand. Meanwhile, in the background, there is a tingling sensation that creeps into the muscles.

Subtle at first, it gradually intensifies so the muscles relax. However, rather than planting a heaviness in the limbs, it loosens tension so one moves freely like a well-oiled machine. Because of this, the pure Indica can be used any time of the day.

Alien Technology has a sweet apple scent. Enhancing its fruity notes is an undertone of spices that bring out its saccharine aroma. Breaking it apart, on the other hand, produces a sour diesel that turns tropical after combusting the buds.

In the palate, Alien Technology has a more tropical overtone that is almost similar to drinking fruit shake. It has strong notes of apple with a spicy kick that enhances its sweetness. Meanwhile, on the exhale, it leaves a diesel aftertaste.

It is not uncommon to feel a little dry while smoking Alien Technology. After all, it has cannabinoids that interfere with moisture production in the body. Most likely, the symptoms will manifest in the eyes and the mouth but are mild. Staying hydrated will counter the discomfort until it eventually goes away on its own.

Alien Technology is an impressive recreational strain but the same traits also provide a reprieve against certain health conditions.

It has an uplifting high that enhances the mood. It reduces stress through a calming euphoria that stabilizes turbulent emotions and the overwhelming anxiety that comes with worrying about work. In a similar manner, it also manages symptoms of mental health issues like depression by temporarily reducing the feelings of hopelessness.

It has a tranquilizing buzz that appeases aches in the temples then blankets the body in relaxation to relieve pain. Soothing the gastrointestinal tract of hunger pangs, it allows the stomach to relax from contractions and process food without disturbance. Because of this, it is a source of comfort among patients dealing with eating disorders such as anorexia and cachexia as it also stimulates the appetite.

Alien Technology has an Indica structure. It is short, compact, and sturdy. In fact, due to its landrace genetics, it has strong resistance to the cold and can flower in almost any condition with little care from its growers. Still, it is better to bring out its full potential through training and proper attention.

Protecting it from the snow, for instance, will keep the plant from dying overnight. In cases of extreme weather, such as heavy rains, moving the plant indoors is necessary as it can break its branches into two. Having a trellis will also prevent bugs from ravaging Alien Technology.

Pruning is essential, especially when growing the plant indoors. It is extremely dense and will sometimes harbor moisture in between its crevices. Lack of proper aeration can lead to humidity-related problems like mold, mildew, and bud or root rot. If left unattended, it will stunt the plant’s growth and reduce the quality of the yield.

Due to its structure, it is the perfect candidate for the Sea of Green method. Growers can plant at least four seeds in a single square meter for higher yields. Pairing it with hydroponics will double bud production as the plant receives nutrients directly from the roots. If flavor is the goal, then it would be best to use soil.

Alien Technology has an indoor flowering period of 8 to 10 weeks. Each square meter yields between 10 to 12 ounces of buds at harvest.

In the northern hemisphere, Alien Technology blossoms from the middle of October up to its last few days. It yields at least 12 ounces of buds per plant.

Have you ever smoked or grown your own Alien Technology? Please let me know what you think about this marijuana strain in the comments below.