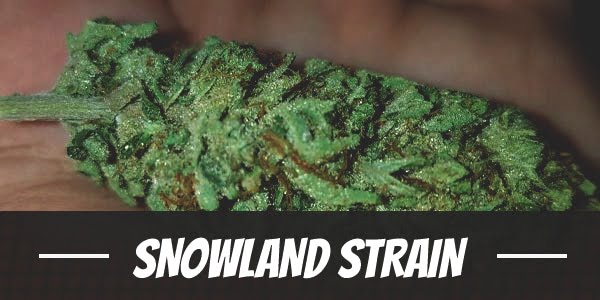 SnowLAnd is a strain that appeals most to hybrids in spite of its Indica-leaning genes. It has a stimulating head high that complements productivity while it has a stress-crushing buzz at the comedown. It is also a thrill seeker’s dream. It has a potent THC level of 15% to 23% that can overwhelm beginners with low tolerance levels.

To create the limited-edition bud, DNA Genetics used Snowcap and LA Confidential. The former has impressive trichome production that coats in buds in a thick frost. It is also a potent Sativa that contributes to its offspring’s energizing qualities. Meanwhile, the latter is a heavy-hitting buzz that relaxes the body and lulls users to sleep.

One of SnowLAnd’s best traits is its ease of growth. It is versatile enough to grow both indoors and out without much problems.

SnowLAnd is an Indica-leaning strain with the stimulating and energizing effects of a Sativa. Its onset, for instance, is a rush of euphoria that immediately alerts the mind. It also brings with cheerful memories that leave one feeling happy from within.

For casual users, the mental clarity creates free space for thoughts to flow freely. It generates ideas and inspires motivation. With heightened determination, users dedicate all concentration to completing projects or reviewing documents with fresh perspectives.

In spite of the hours of work or activity, users do not feel tired at all. The invigorating rush not only continues energize the body but also loosens the muscles of tension. Like a well-oiled machine, users continue to complete tasks while feeling limber. Eventually, it tapers down into a relaxing buzz that release any of the accumulated stress at night.

Overall, SnowLAnd can be used in the morning and evening. Used in moderation, it is a great wake and bake treat that keeps one productive. Users can increase the dosage gradually as the day progress for a relaxing night ahead.

SnowLAnd has a tangy invigorating scent that enlivens the senses in just a single whiff. It has strong overtones of freshly picked lemon with hints of earth. Crushing the buds then combusting it reveals its undertones of pine mixed with citrus.

SnowLAnd’s citric flavors burst in the mouth at the first toke. It is tangy like lemon but with a refreshing taste of pine. On the exhale, its fruity overtones blend with its earthy undertones and leave a lingering aftertaste in the palate.

Dry eyes and a cottonmouth are unavoidable side effects to marijuana’s moisture-inhibiting cannabinoids. The discomfort usually lasts for a few hours but is overall mild. However, users may down a few glasses of water to appease the dry spell. Dizziness, anxiety, and paranoia are commonly associated with Sativa-leaning strains. However, SnowLAnd can induce the same reaction when used in high dosages. Staying within personal limits will prevent the overwhelming side effects.

SnowLAnd’s uplifting head high not only uplifts the mood but also reduces stress significantly. It has a soothing euphoria that calms worries which is characteristic of anxiety and the overwhelming dread that result from over work. In a similar manner, it can also be used as an anti-depressant that manages symptoms of depression and mental health issues like PTSD.

The same psychoactive compound also has analgesic properties that ease the body of aches and pains. It releases tension form the muscles to prevent it from contracting uncontrollably. In the gastrointestinal tract, the soothing buzz prevents patients from vomiting. Hence, it is a useful reprieve against the nauseating side effects of chemotherapy.

The blanket of relaxation eventually lulls users into a deep sleep. With its sedating properties, it enhances the quality and quantity of slumber so one can wake up the next day feeling refreshed.

SnowLAnd has an Indica structure. It has a sturdy frame with a thick stalk that improves its resistance to various growing conditions. Its branches, on the other hand, do not break off easily. Because of this, it is not only a great introductory strain but also an impressive outdoor grow.

In gardens or farms, growers should situate the plant in an area without obstructions. In this way, it can soak up as much sunlight for improved bud production. Although it can withstand the cold, there are many growers that prefer cultivating the plant indoors.

A controllable environment allows growers to adjust temperature, lighting, and temperature which are essential to SnowLAnd’s health. It will need to be pruned often though as it can harbor moisture in between its crevices that develop into mold or mildew. Thinning it out, as well as installing a proficient ventilation system, will aerate the room properly.

Manipulating the plant using the Sea of Green method will significantly improve turnout as growers can plant at least four seeds in a single square meter. Another way to enhance yields is using hydroponics. But beginners may want to stick to soil as it easier to manage and cheaper.

TIP: Buy seeds like SnowLAnd at our marijuana seed bank

It takes between 7 to 9 weeks for SnowLAnd to fully mature. Once ready for harvest, it yields at least 18 to 23 ounces of buds per square meter.

In the northern hemisphere, SnowLAnd blossoms from the last few days of September to the second or third week of October. It yields at least 23 ounces of buds per plant at harvest.

Have you ever smoked or grown your own SnowLAnd? Please let me know what you think about this marijuana strain in the comments below.