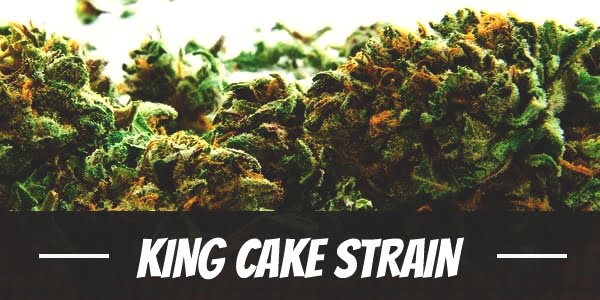 King Cake is a colorful bud named after a famous Mardi Gras pastry. It boasts flashes of purple, hints of green, and enticing yellow to gold hues. Not to mention, it is covered in a thick frost of trichomes which indicate its potency.

The growers crossed Granddaddy Purple and Mystic Gem. Both are striking but are easily distinguished by its qualities. From the former, King Cake gained its medicinal qualities, heavy-hitting high, and short flowering period. The latter is eye-catchingly colorful. Afterward, a cut was taken from the mother plant to preserve its characteristics.

Its recreational effects are not forgotten. The potent strain has a well-balanced high that both Indica and Sativa lovers enjoy. It is mostly used at night due to the heaviness it plants on the limbs but it can easily be enjoyed in the morning so long as it is used in moderation.

King Cake is a quick-acting hybrid. It has high levels of THC which average between 18% to 20%. Because of this, enthusiasts should always be cautious when using the strain as it can be overwhelming. At its worst, it can render the body completely useless in a couchlock while the mind races.

During the onset, it delivers a euphoric rush that instantly uplifts the mood. It leaves users feeling happy which is exhibited by brighter, wider smiles. The mental stimulation is quite hunger-inducing. Thus, having snacks prepared is convenient and efficient. However, one can also consume the strain a few hours before a meal with friends to make the conversation a bit more interesting.

Feeling full, users eventually lowering inhibitions while beginning to unwind. A soothing buzz trickles down from the temples and down to the toes, relaxing each muscle it passes through. In all likelihood, users will want to lounge around the couch or rolling around in bed.

Its comedown is, suffice to say, full-bodied. In kneading the muscles, it plants a heaviness in the limbs that lulls users to a deep, unencumbered slumber while in a state dreamy euphoria. With that said, King Cake is best used in the evening due to its sedating qualities.

King Cake has a sweet smell similar to that of berry-flavored licorice. Enhancing it is an herbal undertone with hints of earth. Combusting it intensifies its overall aroma with the most prominent being basil.

Just like how it smells, King Cake has a sweet flavor that is dominated by the flavor of berries. There is a hint of licorice that is later overpowered by the taste of wet soil. On the exhale, it leaves an herbal aftertaste of basil which lasts for hours in the mouth.

It should come as no surprise that King Cake’s drying cannabinoids inhibit moisture production in the eyes and the mouth. Users can down a few glasses of water throughout the day to ease the discomfort. Avoiding caffeine and alcohol also helps. Although rare, it is possible to feel anxious and dizzy especially after consuming too much of the potent strain. Hence, one must always use the bud in moderation.

Stress is one of the most common problems among enthusiasts. If left unattended, it can lead to the early development of mental and physical health issues. Hence, it is essential to find ways to unwind.

To this end, King Cake is an excellent choice. It delivers an uplifting head high that almost instantly improves the mood. Meanwhile, its calming euphoria appeases the overwhelming dread or anxiety that comes with overwork. In a similar manner, it may also be used as an anti-depressant to temporarily manage symptoms of depression and other similar mental health issues.

One of the best times to use the strain is right before a meal. It soothes the stomach while improving the appetite. Because of this, it is a source of comfort to patients with eating disorders such as anorexia or cachexia.

The same relaxing effects also contain analgesic properties that appease aches and pains beginning from the temples. It is particularly effective against intraocular pressure, a symptom of glaucoma that causes severe headaches and migraines. In a similar manner, its painkilling properties also reduce physical stress.

King Cake exhibits traits from both its Sativa and Indica genes. It is tall but not lanky. Rather, its branches and stalks are quite thick which give it a higher resistance against the seasons compared to other strains. Because of this, it is a wonderful strain to grow.

Of course, as a clone only strain, it is important that users grow out its roots first. Placing it outdoors in the beginning will kill it off immediately. Growers should first cultivate its roots inside a controllable environment for up to 2 weeks. Afterward, it can be transplanted elsewhere.

Indoors, growers will need to prune the plant and top it early. This will increase air circulation in the lower nodes whilekeeping the plant short at the same time. Installing a stronger ventilation system will wick away moisture quickly. Meanwhile, having at least 400-watt HPS lights will increase bud production.

It works well in both the Sea and Screen of Green setup. Although both result in higher yields, the two have different underlying principles. For instance, the latter maximizes turnout in small spaces by cultivating at least four seeds in a single square meter. Meanwhile, the latter requires installing a screen on top of the current canopy and then weaving the branches into the net, so light is distributed evenly.

After flowering for 8 to 10 weeks, King Cake produces between 12 to 14 ounces of buds per square meter.

King Cake enjoys the sunlight. Hence, in the northern hemisphere, it yields higher with each plant producing at least 14 ounces of buds at harvest. It usually matures between the second to the last week of October.

Have you ever smoked or grown your own King Cake? Please let me know what you think about this marijuana strain in the comments below.